Love And Other Emotions 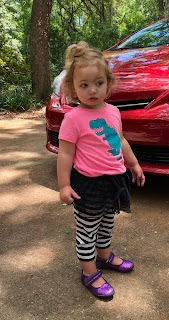 Magnolia June displaying one of her many, many diverse emotions.
That child. She feels as familiar and known to me as my own self and I guess it's because I birthed and raised her mama. Who knows? But I sure do love her. I went over to stay with her for a few hours this afternoon while Lily finally got in to see the dentist. Maggie and I drove to the bus stop and waited on her brothers and of course Gibson, who is always the first off the bus with his backpack worn on his front, ran up to me and hugged me and said (as he always does) "Mer! What are you doing here?" And then Owen, who is as cool these days as James Dean leaning on a car wearing a leather jacket and having a smoke, sauntered down the steps and took his time getting to where I was waiting.
"Oh, hey Mer," he said. "Where's Mom?"
Gibson wasn't sure I could help him with his homework.
"You have to read," he said.
"I can read," I told him. "I think I can do it."
He was doubtful but we managed.
Lily got Owen into a sleep-over camp for kids with epilepsy in June and he's very excited about that. I am too. I'm sure he's going to have the time of his life canoeing and swimming and doing arts and crafts and archery and all of that stuff but I'm mostly glad that he's going to get to hang with some other kids with epilepsy. He won't be different there. He'll just be another kid. Well, another kid at the camp for kids with epilepsy. But you know what I mean.
Here he is up in the loquat tree. 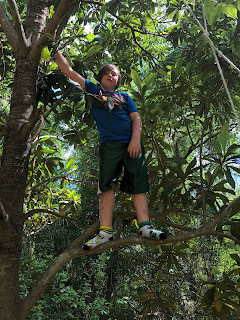 I should not have let him climb that high but I did and he came down when I told him to.
I find myself being at once complacent about Owen's seizures and afraid for him too. He hasn't had but two small ones on Christmas when he forgot his medication for a day in a year or more and yet, witnessing the few he had before we got this med thing figured out is something I can't forget.

The way I love all of my grandchildren is so primal and so profound and quite frankly, so unexpected that I often find myself feeling as if I don't have any idea what to do with it all.
I will say this- whenever you remember your grandmother kissing you and hugging you when you were probably way too old to appreciate it, please forgive her. She had to kiss and hug you like that. She loved you so much that nothing in this world could have stopped her.
Trust me.

The Confederate Jasmine is blooming. I am sorry, but that's the only name I know it by. The scent is almost too heady to bear, even from many yards away. The sun is setting and I am exhausted. I did another long walk today, but faster. I had planned to only do a few miles but once I get out there, it's so easy just to keep going. Easy until it suddenly isn't and I still have miles to walk back. But that's okay. It's good for me and I will sleep well tonight.

The baby chicks are all thriving. Knock wood. I gave them chopped kale and chopped honeydew melon for their treats today. They ate 'em up. 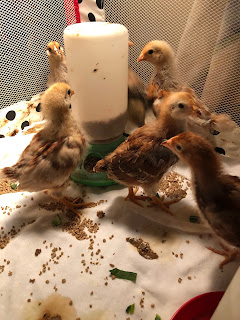 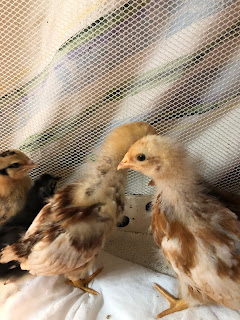 And I would like to end tonight by saying the name of the man who took the gun from the shooter at the Waffle House in Nashville.
James Shaw, Jr.
He is now raising money for the survivors.
He is a hero, no matter what he says and the fact that our president has ignored him is shameful beyond belief.
If I was Trump's wife, I wouldn't hold his hand either. That tiny little hand, as tiny as his little tiny heart, its tiny little muscle pumping his cold, cold blood through his cold, cold veins.