I actually took down last night's post.
For those of you who saw it and commented, I thank you. It was a completely innocuous post, mostly pictures from Apalachicola and I posted it from my phone because I didn't take my laptop.
And then I got a comment from some horrible, nasty, vile person filled with hateful lies about Jewish people and I couldn't figure out how to remove the comment with the blogger app on my phone and so I deleted the whole damn post.
I absolutely could not tolerate the idea of such putrid vomit anywhere near blessourhearts.
The same comment appeared a few days before but I just marked it as spam and disappeared it. I suppose, since the commenter wrote as "anonymous" it's a bit tricky to block him or her.
If it happens again, I'll look for answers on how to do that.
I've been so very lucky in my years as a blogger. I've had almost zero trolls. Oh sure, I get the occasional spam comments with links to porn or interweb viagra but those are easily removed and do not bother me overmuch.
But. This was intolerable.

I am home in Lloyd now. I had such a very sweet visit with Mr. Moon and his sister. We went out to supper last night at the Owl restaurant in Apalachicola which will cook your catch for you and so Mr. Moon took them a piece of the grouper that his sister had caught and gave it to the chef who gourmeted it to the stars. It came back to us with a sort of caper, red pepper cream sauce and all three of us ate every last molecule.
And here's a picture of the brother and sister who love to fish and who love each other. 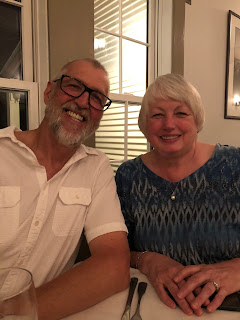 This morning when we woke up, we discovered that Mr. Moon's foot and ankle looked 99% better. The final diagnosis of inflammatory arthritis must have been correct because he responded so well to the prednisone. Hurray! And then in an early morning call he discovered that a Tallahassee credit union would be absolutely delighted to have him come and join their team. The bank he had worked out of for so long started off as a credit union and he enjoys that atmosphere of real caring about the members. He stayed with the bank for a long time after they became a bank but recently, another bank bought that one out and so changes were made and he was one of them. For awhile he looked for an office space of his own to continue his car locator service but he did send his resume to this one credit union and they seem very excited to snap him up.
So hurray again!
Change happens and sometimes it can be very good.

We all went to a late breakfast at a place that's just recently opened for breakfast and lunch. The business itself- Delores' Sweet Shop- has been in one location or another since I've been going to Apalachicola, serving ice cream and, well, sweet things I guess. But now it's in an old house in which several businesses have come and gone.
Would you look at this? 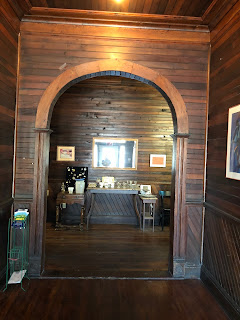 The bones of the place are still there and what beautiful bones they are.
So we ate our eggs and grits and biscuits and then Mr. Moon and his sister got ready to go out on the boat for more fishing and I packed up and came home, meandering through the tiny towns and across the pretty rivers until I got to Crawfordville, Florida, where I stopped at the ACE hardware to see if they had any fancy chicks.
When I got in the door I asked an employee if they had any baby chicks.
"Yes we do!" he said. "We have four and they are just waiting for you to take them home!"
Four. Four chicks.
I looked at them in the cage they were in. They were not exactly baby-babies, having already started to get their feathers.
"Do you know what kind they are?" I asked him.
He gestured to a sign beside the cage. 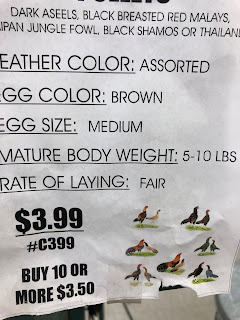 "Do you think that's what they really are?" I asked him. I mean, those are some rather exotic breeds.
"Mmmm...well. Maybe," he said.
Shit. They're probably just the last four chicks they had of all of the varieties and stuck them in the same cage.
But of course you know what I did.
I bought those last four baby chickens having been assured that not only have they been sexed and are all female (right) but that they seem smarter than the other chicks.
Uh-huh. I assume they've been doing Sudoku, waiting for some human to come and buy them.
They boxed all four of them up for me and I bought a bag of chick starter and brought those babies home. They peeped and talked during the entire journey and did not appear to be very happy about being trapped in a cardboard box after a lifetime of excitement in a cage in the center of the Crawfordville Ace Hardware.
I brought them home and set up an old Pack'n-Play in my bathroom which is not ideal in any way but that's where they are. They have a light for heat and they have food and water and tonight I'll start giving them chopped up greens because they are certainly old enough. 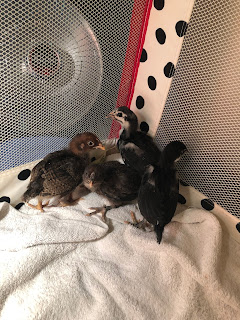 Baby dinosaurs are living in my bathroom.

For having had chickens as long as I have, I really know absolutely nothing about them. I don't know the names of varieties, I don't know the different attributes of different breeds. Well, except for the Americaunas which lay the different colored eggs. And oh yeah- banties which are like miniature chickens who are sort of wild. People REALLY get into different breeds just as dog and cat-lovers do but since Kathleen brought me that first batch of peeps, I've simply taken the birds which have come my way and have learned to love them all. Except for some of the roosters, of course.

But if I'm going to do this, deal with the mess and the worry and the fuss of raising these babies, I'm going to get some more and so tomorrow I'm going to go to the Tractor Supply in Monticello and see what they have for offer. Jessie's got chicken fever but no coop but I've told her that I'll raise a few that she can have if she can convince Vergil to build her chicken housing.
And I know he will. Eventually. He grew up with a chicken-raising mama and he knows the value of good, fresh eggs and friendly hens.
I swear to god, I never in my life thought I'd grow up to be an old woman who tended chickens but it would seem that I have become exactly that.

Well. There could be worse fates.