I Never Left The Yard Today

I swear to god, I have been the most useless human being on the face of the planet today.
No walk because it was raining and no yard work for the same reason. I did go out and check the garden's progress because that's a big part of my day every day. 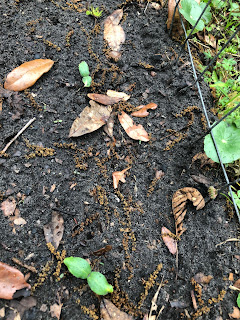 Those are the just-up cucumbers. 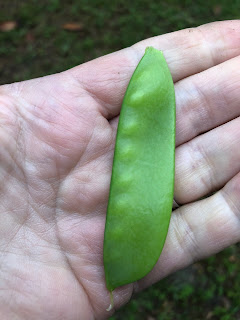 The very first sugar snap pea I've found. Look at that perfect little envelope of goodness. The hull is as sweet as the pea. No waste in this particular vegetable. In fact, the vines themselves are so delicious that it's hard not to eat them up before they can bloom and make peas. 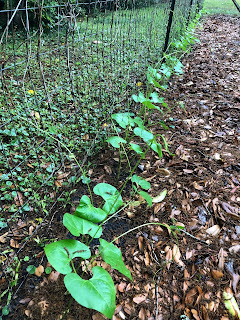 The green beans. They are standing as straight and sturdy as little green soldiers lined up for inspection. Do you see their tendrils? Soon they will find the fence in their miraculous way and grab on tight so that the plants can climb up. I am trying a new variety of green beans this year. They are a type of pole beans called Roma which Vergil's mama told me about. They are the flat kind of bean and supposedly they stay as tender as can be, even when they get big.
Looking forward to that.

So. See? This gives the illusion that I did something today.
She gardens!
Not today, people. Not today.

I dusted one surface. I cleaned the TV screen.
That was my entire housekeeping effort.

I ironed. You want to know why I ironed? Because I wanted to watch the Real Housewives of Beverly Hills and ironing was the only way I could rationalize doing that. I should be ashamed to admit this but I am not. While ironing I realized that my husband's shirts are in need of replacement. They might still look good from a distance (all ironed and shit) but up close you can see the wear. So I ordered him three new shirts. It's not easy finding Mr. Moon new clothes. I ordered these shirts from the Eddie Bauer Tall Man department because he's gotten shirts from there before but their Tall Man department is for men up to 6'3" and Mr. Moon is at least 6'8". So I got short sleeved shirts and am hoping for the best. Most of his height is in his legs but his arms are proportionate to his legs and that's always a problem.
When we were young and I was sassy and we'd first started "dating" I realized that everywhere we went, people asked him how tall he was.
Mostly women.
So I got him a T-shirt and on it I had these words printed:
Six Ten and Well Proportioned.
For some reason, he never would wear that shirt.
Maybe it wasn't big enough.

So. What else did I do today?
Mmmmm...
Changed the chick bedding and gave them collard greens and grapes and clean water. 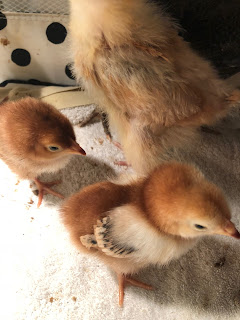 Would you look at that cute little wing?

And did I do anything else?
No. No I did not.
Well, okay. I ate breakfast and lunch.
And thought about making a curtain and considered the fact that I'd have to like, measure and cut and shit and thought, "Nah. Too much work."

So we will just call this a resting day and try to do better tomorrow. 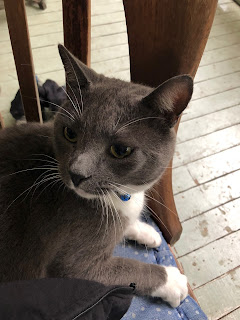 Jack. He's my big, fat cat who likes to sit behind me on the chair I perch on and keep my butt warm. He is truly getting huge-ish. He got on the piano today and made so much noise walking down the keyboard that I had to go and check to make sure that some unauthorized adult human wasn't making that sound. Each foot that he put down made a note that resonated through the hallway, up the stairs, and into the Glen Den, dining room, library and kitchen. Even Maurice was startled. Jack himself appeared to be a bit disconcerted.
He's a good boy except when he tries to beat up my darling Maurice.

All right. Now I'm going to go cook something. In three days my husband will be home and August is going to spend the night on Friday and all three of Lily's kids are possibly spending the night on Saturday. April 13th is the anniversary of Lily and Jason and Jessie and Vergil and the Weatherfords are going to a concert and the Hartmanns are going on a little CRUISE!
Ten years for them.
Can you believe it?
They deserve it.
But. Things are going to get busy around here again and I guess I need to just let my guilt go and realize that having a day where I did nothing was probably good for me in many ways.
Or so I tell myself.