I am not feeling so great this evening.
It may have been my walk this morning. I did not walk an entire five miles but I walked fast. Faster than usual, actually, because I wanted to get home and take a shower and go pick up Lily and Maggie which I did. We had lunch and grocery shopping planned and had to be at the boys' bus stop in time to pick them up. So. Shorter, faster walk.
And it felt fine when I was doing it but fuckin' A. I'm not going to lie to you- I hurt now.
Also, it's probably going to rain tonight and that can often make my poor old joints ache more than usual.
Bitch, bitch, bitch.
Here's something beautiful. 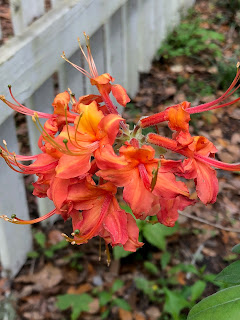 That's my orange-blossomed native azalea, finally blooming. It does not get enough sun there but it persists in living and I guess that's what matters most. It's a big deal to me every year when it blooms and when the aged water oak which shades it finally falls over, it will get plenty of sun.

Here's another picture of something beautiful. 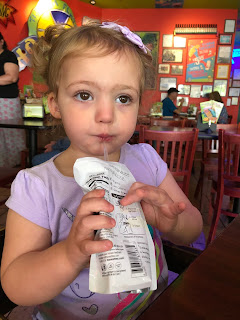 Or actually, someone.
She'd let her mama do up her hair in little pig tails today and she was simply adorable. She is really starting to talk a lot in actual English. She must have asked to go see August at least a dozen times but August and Levon and Jessie all seem to have a little bit of a cold and so they stayed home today. This is Levon's first illness of any sort and that's got to be hard on a baby. And on a baby's mama.

I try so hard to tell Maggie how smart she is, how funny, what a good singer she is but I can't help telling her that she's beautiful and cute and adorable and precious and pretty.
I just can't help it. And I know that's not what I'm supposed to do. We shouldn't put so much emphasis on looks but the words just fly out of my mouth. Those eyes, those lips, that curly hair! That darling little nose. Those pudgy little fingers. That Frida Kahlo eyebrow!
UGH! Magnolia June! Stop being so damn gorgeous! And loving. And kissy and huggy and stop doing things like putting your dollies to sleep in the cradle your Boppy made for your mama when she was born! 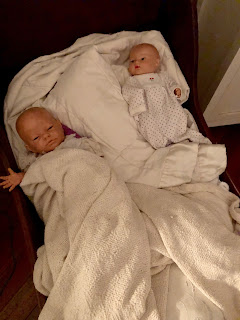 No. Not really. I want her to be exactly who she is and she is mighty sassy too.
When she tucked those dolls in yesterday, Gibson started to get into the cradle with them and she yelled at him.
"No Gibson! Not YOURS!"
And he backed off.
He's a smart boy. And Lily corrected me today on what he said yesterday when he got off the bed to go do something. He did not say, "Sorry, Ladies." He said, "Excuse me, my ladies!"
Which is even so much better.

The baby chickens are all doing well. I bought grapes for them at Publix today and a few minutes ago I chopped up some beet greens and four grapes and put them in their little pen. 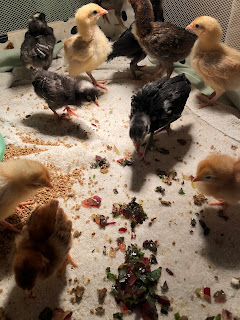 They love greens and grapes.
I am going to clean out the tractor coop in the big coop tomorrow and perhaps put the jungle fowl in there. Those birds are insane. I cannot wait to see who they turn out to be. If they really are any of the breeds that they were advertised as, they could really be interesting. To get an idea of how energetic and chaotic twelve young chickens in a Pack'n'Play can be, watch this video that I made for August who asked if I would do that.

And that's about it. Mr. Moon reports that he and our partner in the Dog Island house have fixed and repaired and cleaned a whole bunch of stuff down there including pipes and showers, did some maintenance work on the vehicle which gets us from dock to house, and scrubbed out the refrigerator. Good work, men!

And of course I MUST mention that the FBI raided the office and Park Avenue hotel room today of Donald Trump's lawyer, Michael Cohen. You've heard that, right? And so of course we'll be bombing Syria within forty-eight hours because there's nothing like a good war to distract the citizenry from presidential investigations.
Except for maybe when the investigation includes allegations from a real and true certified porn star who not only has huge breasts but appears to have an even bigger brain and absolutely no fear of the power of the presidency.
I mean- what could be sexier than that?

Oh god. The world is in a damn mess.