Thanks, Granddaddy! Sort Of.

Every time I take a cloth out of my pocket to wipe the sweat off my face and fold it up and put it back into my pocket, I feel as if I am channeling my grandfather. How many times did I watch him do the same as he worked outside in the Roseland summer heat? As he sawed palm fronds away from their tree, as he turned the compost, as he dug holes to plant things in down on his river lot, as he chopped wood and stacked wood, as he started the trash fire in the burn barrel, as he trimmed and as he sawed and as he hammered and as he went about the incredibly busy life he led in his retirement.

Perhaps this is where I get my seemingly unending need to always be doing something. Something physical. Something outside, mostly. Something that at the end of the day has my bones wracked, my joints sore. I am almost certain I got my need to suffer and feel guilty from him. I can't tell you the recipe that was used to feed me these useless emotions but it probably involved horehound candy, sulfur water, overdone roast beef, and quite honestly, a great deal of respect.
Oh, my granddaddy. I wish I'd known him more as an adult but I certainly did know him well as a child. Or as well as a child can know a god-like figure in her life whose rules were never disobeyed, whose proclamations were taken as seriously as the words Moses brought down from the mountain, engraved in stone.
Don't ever get crumbs in the butter.
Don't finish his sentences for him.
Don't ever lie to him. Ever. It won't go well if you do.
Never, EVER borrow anything from his shop without asking.
Always make your bed.
Always clean or polish wood WITH the grain.
A place for every thing and every thing in its place.
Follow directions! They are given for a reason!
And my favorite- Spread your honey on your toast with your fork and then you can lick the fork.

I am thinking of him right now because I have wiped the sweat from my brow over and over in the last few hours. It has finally felt like summer here today, although not the broiling summer of July or August, but still- enough to get an inkling of what it's going to feel like.
It was cool enough when I walked this morning but I still sweated enough to soak my hair through. If horses sweat and men perspire and women glow, I am a horse.

After my walk, Jessie and the boys came out to see the chicks and hang out and that was a sweet time. We had lunch and August was not much interested in it, but did dart in once in awhile for a bite. 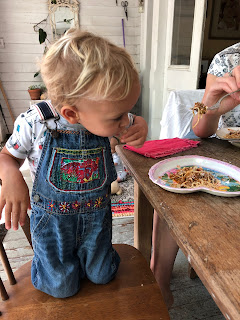 And Levon was a happy boy, sitting on his Mer's lap. 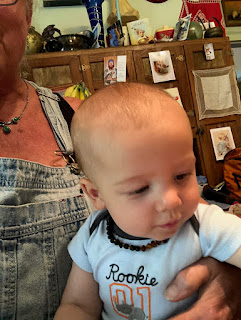 He wants to grab everything within reach and most of what's not in reach too. It is impossible to read August a book while holding Levon because he WANTS THAT BOOK and he wants it badly.

We cleaned out the baby chick pen and we took the two Buff Orpingtons out to live with the Jungle Fowl because they are getting huge and appear to have enough feathers to weather the cool nights. We gave the outside birds more food and fresh water and the Buffs seemed to take the change in residence right in stride.
There are charts which tell you how old your chicks need to be to withstand specific temperatures and at what ages they can go outside but as with almost all of the chicken information I've gotten, it would seem that it's all pretty arbitrary and that chickens are mostly hardy and not very fussy and, like newborns, are far more sturdy than they appear.

And then I read August some books including one that I really have to throw away because I hate it and when he asked for it, I said, "I don't like that book, August. Let's not read it."
"You like it," he told me with grave authority.
"No, I do not like it."
"You like it," he said again, opening up the book.
Sigh...
He, too, has figured out that he is the boss of me. Everything on this planet is the boss of me.
How did this happen?
I do not know.

I do know, however, that my kitchen and laundry "room" and the little bathroom off the kitchen are now clean and feel like silk on my feet and smell of Fabuloso and vinegar. Would this be so exciting if I mopped those floors more than once a season?
I think not.

I just know that I'm exhausted again and have almost suffered enough to assuage my sense of guilt for a few hours and that I'm going to go make a rice and spinach casserole.
And that I need a shower in the very worst sort of way.
And also, that my grandfather did not keep chickens in Roseland but that he did keep them on Lookout Mountain in Tennessee when my mother was growing up. She used to tell me stories of having to collect eggs from hens who did not want them taken.
I wish I could talk to Granddaddy about his chickens. What kind he kept, what he fed them, if he felt any sort of affection for them or if they were just little machines that laid eggs for the family.
I wish I could talk to him about a lot of things, one of them being why in the world he liked horehound candy. Was that part of HIS need to suffer?
Oh well.