Pancakes And Smitty's Club And A Lot Of Stuff Inbetween 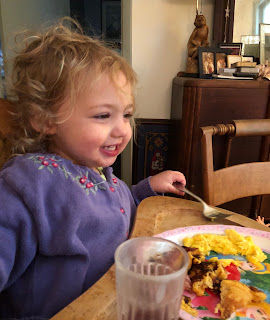 Well, I did not get around to the Smitty's post this morning due to the fact that I decided to invite Lily and her kids over for brunch this morning. But hey! I got to hang out with that darling little doll. 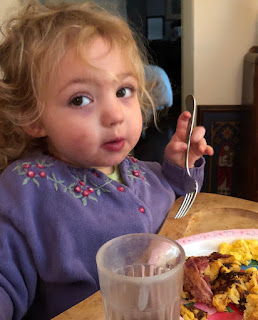 She has the most wonderful expressions. And her face changes from one second to the next so quickly that I just can't keep up with what she's thinking.
Isn't she just a peach and a plum of a little girl? Yes. Yes she is. 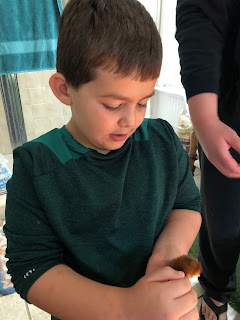 Here's Gibson, that handsome lad, holding one of the baby chicks. He has picked out the newest Dearie. He's a pro by now, not only at naming chicks but at holding them too. As the chick protested at little bit, he looked up and said, "He's dancing! It tickles!"
He's so funny, that kid. Later on we were all lying on my bed reading a book and suddenly Gibson remembered something he had to do somewhere else.
"Sorry, Ladies!" he said to me and his mama. "I have to go!"
Ladies? Only Gibson. I hear that he also told Jason's doctor the other day that he couldn't believe that his dad was getting ROCK HARD ABS!
Jason has been working out a lot.
And so we had a good time except that we missed Owen who is now gainfully employed by his other grandmother on weekends doing chores for her.
Man. I should have thought of that.

When they left I had so much to do, it seemed. Getting the kitchen cleaned up and the house tidied and laundry done. I'd already changed the chicks' bedding and given them fresh food and water. I am so proud of the fact that I can do all of this without removing the chicks from the Pack'n'Play. My four years of nursing school training has come in handy for something after all. I remember how to change a bed with someone in it! Well, at least with baby birds in it.
And I watered the porch plants and I got out in the garden and did a little weeding and mulching and planted some more cucumbers and some squash. Golly but the garden looks pretty right now.
And there went my entire day. But it was worth it. Of course.

I keep checking on the babies, as one does, and although I had not forgotten how incredibly messy they are, spreading their food around everywhere and getting it in the water and pooping and pooping and pooping, I had forgotten just how fast they grow. It's frankly bizarre. I mean, there are chicks that have tiny little pinfeather wings who did not have them this morning.
No. Really. Tail feathers appear as if by magic.

So all of this has kept me busy but what I wanted to write about is that I got some pictures yesterday in my e-mail from a man who had commented on a post I wrote ten years ago. And you can find that post HERE.
It was about a place that was a big part of hippie Tallahassee life and lore back in the seventies and eighties. A juke joint out in what used to be the boonies but is now completely developed with a fucking Target down the road.
It was called Smitty's Club and I'm not going to go through all of the history of it again- I did that in my original post and in it, I said that I did not have any pictures of Smitty's or of Smitty from that time.
Well, now I do.
The man who sent me pictures, Terry Van Brunt, was one of the founding members of the band called Smitty's Band who rehearsed in Smitty's basement and who played at the club.
And this is one of the pictures. 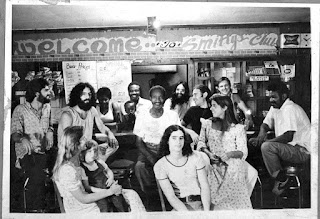 And I was slayed. That's Smitty's band and some of Smitty's family with Smitty right in the middle. Seeing this picture hurled me back a million years and looking at those faces, so young and beautiful, absolutely blew me away. Terry Van Brunt is the guy in the back row, farthest right.
I have side stories with some of these folks. The woman holding the little boy gave me thermal underwear before I moved to the house not far from here that we rented for $75 dollars a year which had no running water and walls that you could see the outside through and god did I need those thermals. That little boy grew up to be an amazing drummer and his daddy is in the back row to the right of Smitty. The first weekend I lived in Tallahassee I went to a local music festival and he was running a booth that sold egg rolls. His business was called "One Hung Low" which yes, is horribly racist but I'll never forget it and he certainly meant nothing evil at all.
The guy on the extreme left is a man I still know and run into occasionally. He's a drummer. I showed this picture to Jessie and she knows him too. That's Smitty's son, Mac, on the back row to the left of Smitty and his son and his wife next to him.
And that guy in the front? The kid? The pretty one.
That's Floyd.
I think I've written about Floyd before. He was a guitar prodigy. A child genius when it came to music. And he was so lost.
His mama died when he was quite young and she was beloved and I don't think he ever got over that. When I met him, he was a little bit older than he was in that picture and he was stumbling drunk and probably tripping at a different club in Tallahassee where my ex, Jerry, had been playing with Bill Wharton whom I know I have talked about. Floyd almost stepped on Bill's guitar or maybe he did and instead of cursing him out, Bill said, "Floyd, you got your guitar out of the pawn shop yet?"
"Not yet," said Floyd.
"Well, how about we go down there tomorrow and get it out and you start playing with us?"
That's the kind of man Bill Wharton was.
Is.
And so Floyd became a member of the band family and we tried so hard to take care of him. So hard. He was such a beautiful, lost soul. One of my favorite memories of him was from one night when the band was playing down in a bar in Panacea, Florida (and that's a whole book in itself) and a drunk shrimper was trying like hell to get all of the band wives and girlfriends to dance with him to a juke box tune and none of us would. Finally, he turned to Floyd who was on break.
"Hey man," the shrimper said. "Would you dance with me? I just really wanna dance."
"Sure," said Floyd, and he did.

The night Floyd hung himself Jerry and I were expecting him over for supper and for them to work up some tunes. He never showed up.
Oh, god. How we mourned him. We just couldn't keep him here.
But for awhile he was a glory with a light almost strong enough to defeat the darkness. And he played in Smitty's Band.

Here's a great article that Terry sent which was published a few months before I got to Tallahassee. It was in the Florida Flambeau, which used to be the name of the paper at FSU. 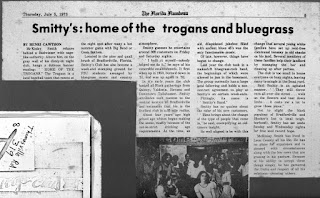 He sent me this, too. 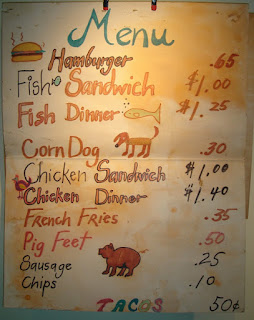 That's the way it was. A chicken dinner for one dollar and forty cents which was probably half a chicken, fried, with baked beans and cole slaw that Mac's wife made.

Smitty's gone from us now and has been for a long time. Floyd's been gone even longer. Others in that picture are gone as well and so many of the friends and the lovers. The ones of us who are left are what you might call old.
Or at least older.
I'm sure we're far older than Smitty was in that picture. Instead of long hair, a lot of us don't have much hair at all. Our bodies, now thicker and slower, were all so lithe and beautiful then that nudity was nothing special. Nothing special at all. And where if once we danced with wild abandon, now we dance carefully if at all.
Maybe we dance like Smitty did. I can see it all still- his closed-eyed shuffle, beer bottle in hand, ladies dancing with each other, couples dancing close and then away from each other and coming back to touch again. Little kids standing in front of the stage, wide-eyed at the music and the folks making it, doing their own hippie-kid dances. Everyone sweating because there was no air conditioning. The neon beer signs, the Christmas lights. The people outside, smoking a little weed with the stars and moon above. Laughter. Always laughter.

These are a few of the things that picture brought back to me. And here I am, the grandmother of five, a garden-tender, a chicken mama, a wife. I am a woman who fiercely loves the ones who are here and the ones who are here no longer but who will always be in my heart.
You better believe it.
And also, I am just so glad that I got to grow up and be a hippie and dance in long skirts and be a part of something that was just amazing.
And that I got to know Smitty who not only tolerated us hippies but was probably amused enough by us to let us hang out with him, let some of us live in outbuildings on his property, have band practice in his basement, and use his club as a place to gather the tribe.

Terry Van Brunt- thanks for the memories.