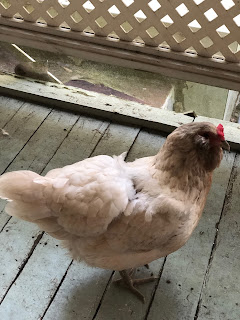 There's Miss Camellia, patiently waiting for a treat. I am NOT giving her one because she's had like three separate treat sessions today and come ON!
Unless I change my mind and do give her one.
Okay, okay. I just gave her a few more Publix brand Friskies. At least she doesn't peck me anymore when I ignore her. I discouraged that activity by never rewarding it with food and by waving a napkin at her. She really doesn't like a napkin being waved at her. Anything resembling an attacker from the sky is extremely threatening to a chicken which is why the little ones in their baby pen go insane when I lean over them to change their bedding or give them fresh food and water. You'd think that a few weeks of my presence meaning deliciousness would convince them to relax a little when they see me, the giant, above them. But it hasn't.
Well, the fear of a threat from above is absolutely ingrained in chickens and if it wasn't, a lot fewer would survive.

I went to town again today to say good-bye to Jessie and Vergil and their sons as they are now off on a little trip to visit Vergil's papa and his step-mama, Grandfather and Go-Go. When I got to their house, August ran out to greet me and told me to "come up here" meaning the steps, and then "come into my house." Which I did.
"I'm going on a big, big airplane!" he said. He's been on planes before but he doesn't remember. He was happy to see me and we talked about Grandfather and Go-Go and he showed me all his stuff and wanted me to read him books and when his mother tried to get him to eat his lunch he said, "I won't!" which, because I am his grandmother and not his mother, was extremely funny to me.
I'm not going to be the one who has to deal with a child whose blood sugar has crashed on an airplane.
I ate my lunch, however, and then kept the boys occupied while Jessie and Vergil got the car loaded and the kitchen cleaned up. And then I kissed them all good-bye and went to Publix AGAIN and came home and here I am. The greens and fruit have been chopped and distributed to the different chicks, the shrimp has been peeled for tonight's supper, and I am in a cheerful mood despite the fact that band practice is going on next door.
AGAIN!
I just wish I liked the sort of music they play. But I don't. And I can't. And I never have. Rushy, pushy, percussiony rock, or something like that. No subtlety whatsoever, just testosteroney and loud.
They need to smoke more dope. That's my opinion. Add a little yin to their yang. Know what I mean?

And that's all I really have to say tonight.

I'm just happy to be here. I hope you are too.