On the route that I've been taking recently for my walks, I have to trudge up a fairly busy county highway for a mile and a half which sucks as much for the fact that it's pretty much all directly in the sun as for the fact that I am constantly having to walk onto the shoulder to hopefully avoid getting hit by cars and trucks. It's not really that bad, though, and there's a pretty good hill I go up that makes me feel as if I am actually getting some real exercise and up until today, I've been taking a side-road at the top of the hill for a mile or so which goes around a cemetery and through some country neighborhoods like the one with the rose house. But this road is not ideal either. It's getting a lot of traffic due to a detour caused by the rebuilding of the bridge over Lloyd Creek and there is almost no shoulder there and quite honestly, I'm in more danger of being hit on that road than I am on the highway.
So. Today I went a little farther after the hill was topped to a different side road and it was so lovely and I enjoyed it so much. It travels through farmland and there are some country gentleman houses set way back and there was almost no traffic but a great deal of shade. Also, the road is relatively flat, which is very nice.
After about a mile on it, I took a small, unpaved road off of that road which looked like this. 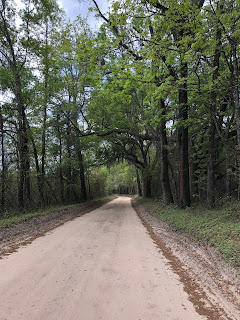 So pretty. And along the way I saw some of the most beautiful Spanish moss I'd ever seen. I swear, it looked as if the moss had been combed. 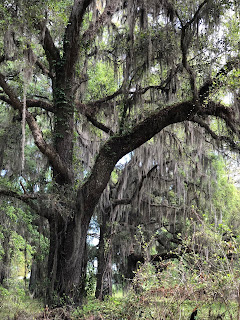 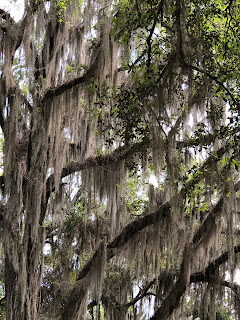 We get so used to that moss around here that we don't even register it but I did register the moss on these trees.
And then I walked home and it was hot and when I crossed the creek I wondered if the story of the huge alligator who lives under that particular bridge is true because it surely would have been nice to walk down and have a little swim.
But I did not.

I rested a while when I got home, eating my lunch and watching another hour of that documentary series about the Rajneeshees and man, all I can say is that those people got up to some really weird shit. Criminal shit. And who the fuck would follow a man who never even speaks and who wears a one million dollar diamond watch that sparkles and shines as he raises his hands in namaste prayer form as the lights from the video crews shine down upon him and drives around in one of his many, many Rolls Royces so that his disciples can bow to him as he passes?
Lots of people, obviously.
And some of them would even attempt murder in his name.
Hmmmmm...
Religion.

Okay. Let me just say that I am ever grateful NOT to have the religion gene.

And then I got up off my ass and went out and got the cucumber row planted, having first pulled up a bunch of dollar weed which is one stubborn and tenacious plant. Actually, I didn't get the whole thing planted because I ran out of seeds and I need to make another seed run.

And I am happy to report that the bean seeds did not get eaten but look fine and hardy and filled with gusto. 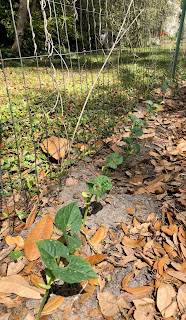 That is just such a happy sight to me.

I really want to pull the rest of the beets and get them pickled and maybe I will do that tomorrow afternoon. In the very early morning I am taking a friend to get a colonoscopy. You know me- don't expect me to show up at your party but if you need a ride to get your colonoscopy, I'm your girl!

So this day has gone by well and I feel pretty good and have not been lonely at all. The only person I've talked to, voice to voice, is the man Mr. Moon took the roosters to who was walking by when I went out to get the paper. We had a proper chat and he told me that he's lived in Lloyd his entire life and we discovered that we are the same age but for a few months. He has eight grandchildren and two great-grands. We both agreed that having good families is the very best thing on earth.

And oh- I just spoke to Camellia who was on the porch clucking at me and giving me the eye for treats.
"No," I told her. "You have had three treats today. Two cat food treats and one banana treat."
She clucked some more and went back out the cat door.
She did lay me a perfectly beautiful and rather large egg today but still- enough is enough.

And thus, my heart is pretty much at peace and I am quite content, although a bit apprehensive about getting up at six-thirty a.m. to drive to town but it will be a sort of adventure. For me, at least. The woman I am taking has had colon cancer and so I am certain that these appointments must fill her with far more than mere apprehension although she says that everyone at the clinic treats her so beautifully and takes care of her so well. She's sort of a rock star there as her case is a bit unusual. Also, she is a woman I respect a great deal who is a real, true Christian who does not judge, never tells you she's praying for you, and who, if she is needed, will be right there for you. And hey! Maybe after I take her home, I will treat myself to a delicious Waffle House breakfast with hash browns and raisin toast with apple butter.
Sounds like a good idea to me.

And now I'm going to go turn off my sprinklers and pick something for my supper.
I might even cook some freekeh tonight.
It always all boils down to food, doesn't it?
Well. For me at least.