The Play Is The Thing

Since forever ago my friend Judy has wanted to direct Arsenic and Old Lace at the Opera House in Monticello and has been talking to me about being in it and I've always said I would be and that it would be a treat and yes, of course! but all of a sudden, it is time, auditions have been this weekend and I have not gone. In fact, I have called Judy and told her that at this point in my life I just cannot be in a play.
I haven't done that in forever. Be in a play, that is, and there's part of me that bemoans this fact and part of me that knows that it would kill me. The last play I was in just about DID kill me. I felt horribly miscast and never could fit into the skin of my character the way I wanted to and memorizing lines was just the most stressful thing and although the coming-together of rehearsals and the creativity of the, well, creation of the play was, as always, a joy, the performances were more of a nightmare for me and when I think of doing another play now it makes me want to cry and I think that's a pretty good indication that no, I shouldn't do it.
Or maybe it's an indication that I SHOULD but that's another line of reasoning and one that I don't embrace.

I feel quite conflicted about all of this. I WANT to be a person who has lively and interesting "outside" interests. Who can spend a day taking care of her grandchildren and then get in her car and drive to Monticello to hang out with lovely people and laugh and work together to make something whole and real out of words on paper with her body, her voice, her face. Who CAN slip her own skin and become someone else. Who can learn the words so well that she can let the other character take over, let the magic occur, wear the make-up, the costumes, make the make-believe believable under lights on the worn, beautiful boards of the stage of the Monticello Opera House which is always an honor and a joy to perform in.
I do want to. And even as I write that, it all sounds so fabulous and it is when it's working right.

But I do not think it would be that way for me right now. This has just been such a hell of a year with people dying and people getting married and so many trips away from home and part of me is just afraid that something else is going to happen and I'm going to have to attend to it and the show must go on, there is no way around that and besides, I just don't have the energy and oh, it takes so much energy to do it and to do it well. And so, no, I am not going to be in Arsenic and Old Lace and they will be having fun without me and that thought galls me too because being in a play is work, yes, but it is PLAY, after all, and the best and most profound way for an adult to play with others, if that adult is not a musician which I am most definitely not. Not in this lifetime but maybe the next but I can't count on that, not for one second and besides, I only have, strictly speaking this very one I'm living in.

Jason and the boys came out and we took the boat that Mr. Moon is going to use for gator-hunting next month (yes, he is going to do that again) down to the Wacissa River and it was a very fine time. 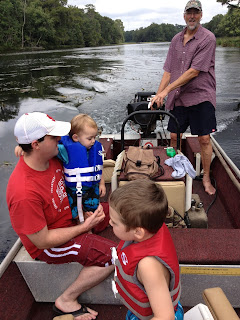 My boys on the boat.
It was a short trip but a good one. The water was clear and there were birds in abundance. The egrets, the herons, the ducks, the coots. There were turtles sunning on logs and there were gators, at least a half a dozen, hanging suspended, doing their best imitations of floating logs. We went down a side waterway and stopped and got out and swam in the water which is cold enough to take the breath away. It was heaven. 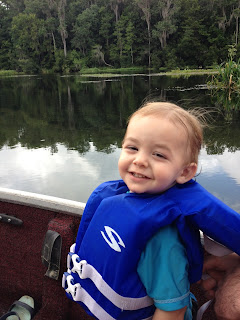 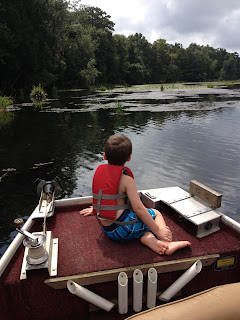 The boys loved the ride and although the cold water was a bit much for them when it came time to put their entire bodies in it, they spent a good deal of the ride with their hands in the water. "It's beautiful!" Owen said and he was right.

After we got home, Jason took a sleeping Gibson back to Tallahassee but Owen stayed with his Boppa and his MerMer for awhile. I heated up pancakes from breakfast for him and made him hot chocolate in his favorite cup and when I changed out of my bathing suit and into my dress he looked up as I came into the kitchen where he was sitting with Bop and said, "You look beautiful, Mer!"
Oh my heart.
He was sweet all day long, so sweet. The sort of sweet you'd want your grandchild to be or your child or your mate or your boyfriend or your anybody at all. When I told him I was coming on the boat ride when they got here he said, "Oh Mer! I so glad! I love you so much! I been missing you!"

Oh Jesus. Yes. They tell you that having grandchildren is the very best thing and the most wonderful but frankly, I thought they were making that shit UP. How could it possibly be that good?
Well. It is. It just fucking is and that's all there is to it. It's wonderful and it's amazing and it reminds me of how I felt when Hank was born, my first born, that feeling of love which was like nothing I'd ever felt before which encompassed and surpassed all of the sorts of love I'd ever felt, up to and including the romantic and why did no one ever talk about that? Yes. I have felt a sort of romantic love for all of my children when they were babies and yes, I feel the same for Owen and for Gibson. A romantic, fierce, protective, joyful, desperately-hopeful-for-all-good-things-in-their-entire lives sort of love. And with grandchildren, there is even another note, another element which comes, I guess, from not being totally responsible for their physical well-being. I can't quite explain it. Lily and Jason are the parents and as such, are the first-line defenders of their sons. They are the ones who must keep the larders stocked at all times and make sure of the health care and worry about their educations which leaves their grandfather and me to be able to more purely and simply just enjoy them. Of course all of those things are important to us and will always be as long as we are alive but there is something which tells me that my most important job with them is to share joy with them.
Joy.
To express to them and with them how much just their very being on this planet is a joy to us and how their presence is a miracle to us.

I will be honest. There are days when I'm tired and they're here that after about six hours I am longing for a nap. When the constant, "MerMer, watch this!" gets wearisome and I have perhaps heard Brown Sugar one too many times. This is the truth of childcare, no matter how much love is involved. But. I wouldn't trade any of this for anything. The fact that Owen knows where everything in my house is pleases me no end. That Gibson, too, is learning this world that is his grandparent's house. That he has his favorite books and toys and knows where I keep the treats and is learning to take care of the chickens the way his big brother does. And I can see how this relationship they have with us adds a whole other dimension to their lives which is unique and yes, important. To be loved so purely for nothing more than their sheer existence. To be delighted in so obviously. And for us, the grandparents, it is at least as amazing. To have a child love you in the way grandchildren love you is just something no one can really tell you about. It, like all sorts of love, has to be experienced to be understood.

Well. The rain is falling again, pouring and I am thinking that we need as many words for "rain" as the Eskimos by legend at least, have for snow. This is the falling-like-hammers rain. The toad-strangler rain. The falling-so-fast-it-collects-on-the-ground-in-rivers rain. And somehow it is already almost seven thirty and I have to get supper cooked.

I am not going to be in Arsenic And Old Lace but I still get to play.
I am a grandmother and I play and I work and I get to experience all sorts of creation and it's good. I know myself well enough by now to know my limitations and I am a woman of vast limitations. And for right now I do not need that many outside interests. I do not need to drive to Monticello three times a week and to be onstage with make-up on, pretending to be another person or, perhaps to be more optimistic about my acting abilities, becoming another person. With Owen and Gibson I am grandmother and sometimes that means being a pirate and sometimes that means being nothing more than arms and heart and soul and kisses. I will not be participating in the creation of a play but I am up to my eyeballs in the creation of my grandsons' universe.

For now, that is what I need and want to do. And hell, I can wear make-up if I want to and if I do, Owen will notice (because he notices everything) and might tell me I'm beautiful. And no matter what, Gibson will say, "I love you," and put his arms around my neck and squeeze me and kiss me.

Some day I'll tread those boards again but for right now, I'm extremely content just to tread the ones here in my house and the ground of my yard from porch to chicken coop, to the garden, to see the goats next door, alone or holding the hand of Gibson, never quite able to keep up with Owen who runs ahead and says, "Come on, MerMer! Come on!"

Sunday night. All is well.