Panthers And Tigers And Bears, Oh My!

We did indeed see the bears. Or at least, one bear. He was laying in the sun, snoozing like a beast. 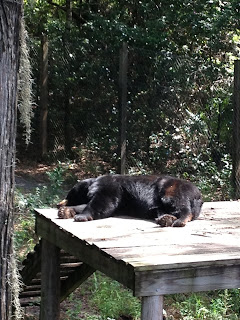 It was a good day although I swear to you I am coming down with a cold. Now if we believe in the germ theory (and I suppose we must) I can't even comprehend how I could have gotten a cold. Did some bastard on Friday night sneeze my way? I don't know. But my nose is running, my sinuses hurt and my body aches. On the way to the museum, Gibson kept putting his little hand on my arm, saying, "Hot!" Could he tell I had a little fever? How odd.
But I took Sudafed and Ibuprofen and it wasn't so bad but I never did feel very perky today. Luckily, it wasn't so hot and the boys were good boys. 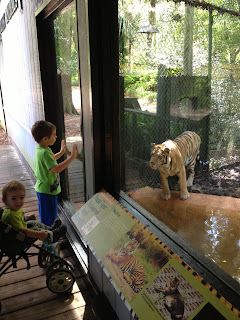 The first animal enclosure we came to was that of the Bengal Tiger's. He is visiting us and will be returning to wherever he lives soon and I am so glad I got to see him even though it does grieve my heart to see such an astoundingly beautiful wild animal in such a small place. As soon as Owen approached the enclosure, the tiger leapt up and bounded towards him and it was almost frightening. I KNEW there was no way the tiger could get out to eat my grandsons, but there is a part of the brain which was evolved way before glass was invented. I could have watched that tiger all day long but Owen's agenda does not seem to include staying for very long in any one place. Gibson, of course, is happy to do whatever.
That child. 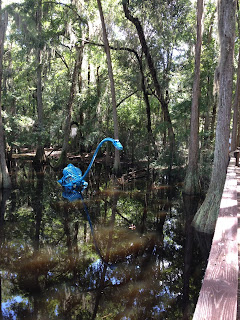 Owen and I have been discussing the fact that we both believe that there are still dinosaurs somewhere on this planet and that we would very, very much like to see one. At the museum there are at least a dozen large dinosaur sculptures made by the very talented but now deceased Jim Gary. They are made of machine parts and vehicle parts and I don't know what all but they are amazing and graceful and look perfectly at home in their woody and watery settings and I especially liked this one, wading through the water. Our rainfall has finally given this dinosaur the habitat he was built for. The museum is located on the banks of a lake and a cypress swamp and I don't think I've ever seen it look better. 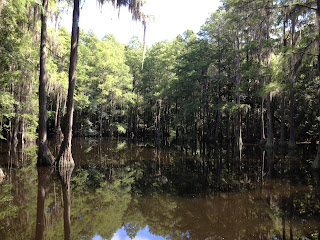 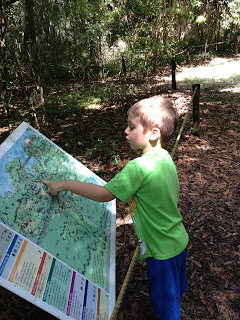 After we saw all the animals we had to go to the playground which truthfully, is probably the boys' favorite part of the whole place with the possible exception of the gift shop. They played awhile and then I forced them to go to the cracker farm exhibit with me. I love that thing. I love the pigs and the sweet brown cow and the honking geese and the chickens, of course. I love the garden and the horses. 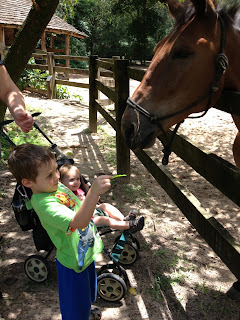 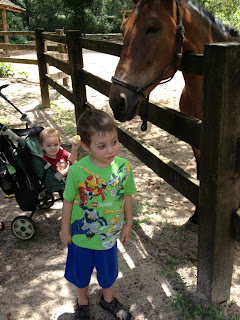 The boys especially love the horses.
But I think I love the old cabin the best. I can't peek in the door without wanting to take a nap on one of the beds. Something about that old place calls to me. 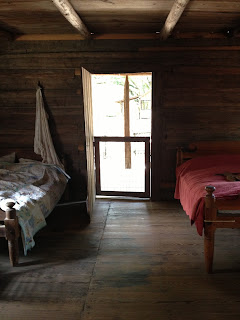 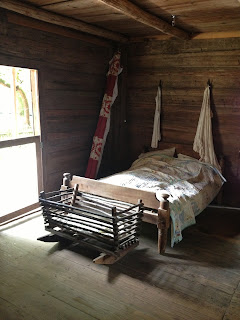 It was a hard life for the people who lived in that cabin. I tried to tell Owen about how, if he had been a boy back in those days, he would have had to work hard to help the family. He would have had to bring in wood for the mama to cook with, to bring in water for the family to drink, to help feed the animals and work in the garden to grow the food. But of course he's too young to understand all of that. He was much more interested in getting to the gift shop where I bought him five tiny dinosaurs and a watermelon-flavored lollypop with a worm in it. The worm was supposed to be in it. I think, in fact, that the worm had been in it too long and the worm-flavor had overtaken the watermelon flavor and he didn't finish it, but I thought it was brave of him to attempt it. He ate another one a few months ago and liked it right fine.

And so that was our day at the Junior. I enjoyed it so much, even though I didn't feel very well. I came home and took a little nap and now I'm going to make supper and I'm hoping I am not really, really sick because dammit, I want to go to Roseland and I want to have a good time and I'm hardly ever sick and how can this be?
Well, if there's one thing that life has shown me this year it's that there is no fairness involved and why we humans think there should be is beyond me but we do, somewhere deep in our brains. Not as deep, perhaps, as the place which has a moment of panic when a Bengal Tiger leaps towards our grandchildren but still deep enough to be firmly implanted.

We humans are silly things and some of us believe that dinosaurs surely still walk the earth or at least swim in the vast depths of the seas and on some days, anything seems possible and today was one of those days and I am grateful beyond all measure for it, as I am for this life which fairly or unfairly, I have been allowed to live.