A Sleep-Over Of Mixed Blessings

The boys went to sleep around 10:30 last night, both of them around the same time. I had Gibson in the pack-n-play in the bedroom with me and Owen in the bed beside me. Boppy slept in our old room.
By himself. And I'd arranged all of that.
I woke up about 1:30 and thought, "Wow. Maybe Gibson will sleep through the night!" as he does at times. He must have read my powerful mind-thoughts though, because he woke up right that second and started crying so I got up with him and gave him a bottle, as his mama said to do if he woke up and we sat in the dark and I rocked him and gave him his milk but then, instead of being content to be put back into his own bed (which Lily says is what happens at home), he refused to lay down and cried piteously so I picked him up and brought him into bed with me and Owen where he alternately held on to me like a cuddly tick, flailed, scratched his bug bites, kicked, and punched. This went on for about three hours until I got back up with him, changed his diaper, gave him some Benadryl and some more bottle, and finally got him to the point where I could put him back into his bed.
It was then about 5:30 a.m. and by this time I felt terribly horrible about anyone who has ever been tortured by sleep deprivation because it is the worst and really, I would have preferred bamboo shoots under the fingernails although maybe not waterboarding. Hard to say. 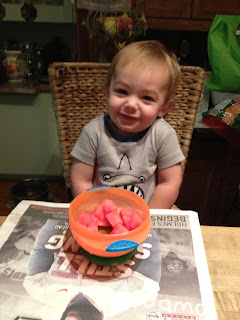 My Torturer, Eating Watermelon For Breakfast

Owen slept like a champ through all of it. He woke up slightly at one point to ask politely for more covers. When he got up this morning, he asked me and his grandfather how our naps were and said that he'd like to just have a sleep-over every night and really, that would be okay. 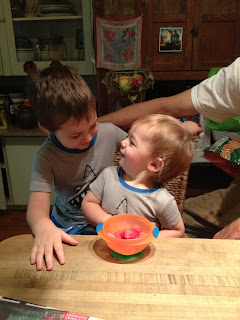 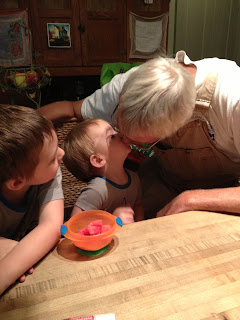 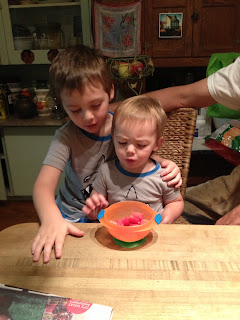 And of course, the morning sweetness made up for a lot of torture.

But then. Oh god. This is just horrible. Nature is bloody in both tooth and claw, y'all.
We went out to let the chickens out and feed them and B.B. was OUT OF THE COOP and how that happened, we do not know because the door was tightly shut and Mr. Moon found Baby, dead in the corner of the coop, almost entirely eaten.
So. Fuck. Shit.
Some animal, probably a coon or a possum, climbed up the coop and got in through a tiny vent space and murdered my Baby chicken and I'm sure she died protecting her chick.
I feel sick. Just sick.
We thought with all of our hearts that we were doing the right thing, keeping them in the coop which no animal but a squirrel had ever broached before. But you know what? Everything likes to eat chicken. Every creature with teeth on this earth loves to eat chicken and coons and possums are wily and capable and maybe Baby would still be alive if we'd let them out where they could have roosted up in a tree.
Who knows?
Obviously, not us.

Owen took the news with more equanimity than either his grandfather or I did. "Maybe you get another mother for B.B.," he said. But he allowed as how it was very sad and he told his mother and father all about it when they got here to pick their sons up. Neither Owen nor Gibson nor I saw the remains, of course, and Mr. Moon buried what was left of Baby in a real grave of sorts. We loved that bold, crazy little mama.

Well, you know- you raise chickens, you fall in love with them, you're going to get your heart broken. That's just the way it is. B.B. is back in the coop and Mr. Moon is closing that little gap and getting ready to go to Georgia. The boys have gone home with their parents who had Big Fun last night from what I hear. I sure hope they did. They deserved it. And the boys and Mr. Moon and I had fun too, up until the torture began and Mr. Moon's nap went quite well, or so he reported this morning. I actually feel about a million times better than I did yesterday, despite the lack of sleep and go figure. I'm washing sheets and drinking coffee and pondering the unfairness of life in ways both good and bad. Sweetness and slaughter, sleeplessness and coffee and feeling better, gorgeous boys who love and kiss me and their grandfather.

I don't understand or have an answer to any of it and I guess if there's one thing I am yet to learn on this earth, it is that here we are, this is the way it is, it's what you do with the reality of it all that matters.

I just know I'm lucky and I can take a nap today and that it stormed and rained like a motherfucker last night and it was beautiful and Owen and Gibson and I sat on the porch swing and watched it and smelled it and the lady spider above us (huge now) neither fell nor pooped on us and that was glory and Gibson wanted me to do the Eensy-Weensy Spider with his willing little hands over and over again and I did and he laughed and laughed.