That Boy Done Tore Up My House 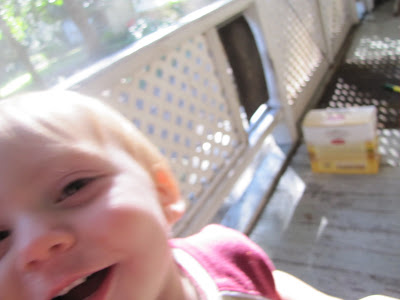 It's ten after six p.m. and here I am, sitting in the center of a chaos. Owen's gone but he left his mark, and it's not unlike the morning after a hurricane when you go outside to clear skies, sweet balmy air and complete destruction.
And those eggplant are not going to jump in the panko crumbs and saute themselves now, are they?

God it was good to have him here. When we got to his house to pick him up, he was dressed in a monkey costume. Do I have a picture? Hell no. But it was cute. Take my word. Plus, he was carrying a little ghost around going, "Ooooh."
I gave him his baby and he hugged it to him. "Doll!" he said and then he hugged me to him and I hugged him to me and it was good, people. It was good.

We did all our stuff. We played hide-n-seek and that boy can hide. And then he laughs like hell when I find him. We fed grapes to the chickens. We ate pasta and yogurt and grapes and apples and crackers with peanut butter. We read books. We tore up the newspaper. Okay. He did. I didn't. I just laughed and then cleaned it up. He also tore apart a cabinet in the kitchen. I need to go clean that up.
And he learned how to feed the goats, sticking leaves through the fence and letting them nibble. He was frantic for me to pick more leaves. He likes to feed the goats. He tried the leaves himself. He was not impressed.

And now he's gone and it's quiet. Mr. Moon is out in the woods. I am still feeling weird. Kathleen and I talked about death for awhile on the phone this morning. I'm fine with that. We're all going to die. But still- damn. I fucking hate cancer. Who doesn't? Well, Kathleen, probably. She's still looking at this whole thing like a journey, another experience, another adventure.
I wish I was as awesome as Kathleen but I am not. Let's just face it. I am not.
I do not feel any sort of affection for that sort of adventure. None. At. All.
I have an awful big affection for Kathleen, though. So there you go.

Well. Life. I need to cook supper. I have no appetite for cooking. I wish someone would bring me a nice serving of Buddha's Delight in a clever white box. That is not going to happen. Maybe once I start chopping and panko-ing, all will be well.

I noticed this afternoon that Elvis has blood on his throat feathers. So something DID happen in that hen house last night. Fuck. I guess a coon is getting in. What else could have torn the lid off the garbage can? What else would have attacked my rooster? What else could have opened the door to the coop which allows entry into the hen house and then found its way out again? Nothing I can think of but a raccoon. Speaking of clever.
I'll shut the door up tonight that leads from coop to hen house. I'm proud of Elvis for fighting whatever it was. He's a fine rooster, that one. 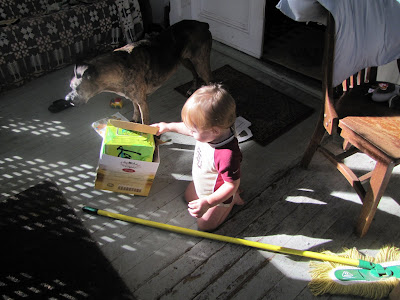 All right. There's another picture of Owen, playing with boxes, his trusty dust mop by his side, his adoring Pearl watching over him.

I better go put that kitchen back together and cook some food. That's what life is all about. Trying to keep just this side of chaos, trying to keep our bellies fed.