I Have Found The Family Compound And It Is Sweet

Now. Let me tell you a story.
When I was a little girl and lived in Roseland, there was a couple that my grandparents knew who lived in the house at the very end of the road we lived on. They were named Frank and Kay Baisden. He was an artist and art professor. She was his wife and wore long colorful skirts and silver bangles because they spent part of the year in Mexico City where Frank taught art at the university there sometimes. They were sort of Bohemian, I guess, looking back now, and I adored Kay and was fascinated and a bit frightened by Frank.
They took tea every afternoon and sometimes we were invited. I remember the tea pot and the cream and sugar cubes and lemon, if you'd rather have lemon, and Kay would read our tea leaves and they lived in one of the most awesome houses in the world (or so it seemed to me).
I have always been as fascinated by that house as I have been of this little cottage with the pool and oh yes, by the way, they're practically adjoining properties.

So. Mr. Moon and I were taking the back road to the beach this morning and we passed this sign: 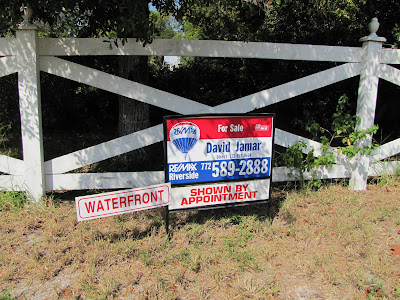 "Turn around! Go back!" I said and Mr. Moon did and we pulled up into the driveway and this is where it ended:

The other side of the Baisden House.

For a moment I could not speak. Then I could only whisper.
I called the number. Mr. Jamar answered. I recovered my voice and asked about the property.
"Oh, that's a very special property," he said.
"I know. What are they asking?"
And if I thought Garnet Hanshaw's house was out of my league, well...
"$795,000."
Okay.
"How many acres?"
"About five."
And that was really all I needed to know so I thanked him and hung up.

Mr. Moon said we should go look at it just for fun. So I called back and we met him at four and oh Lord. Well. The original small house is still there. Here's the living room fireplace. The whole thing is old pine. It looked exactly as it had when I took tea there with Frank (who did not like children) and Kay, who had always wanted children. 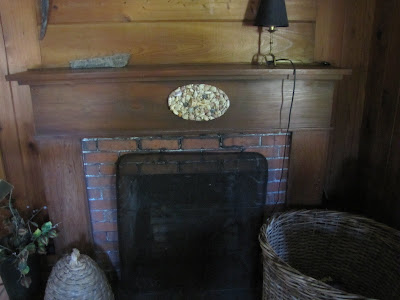 And the little front porch where a dog bit me. He didn't mean to. It was okay. 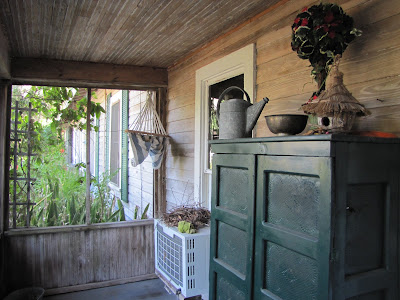 But they've added a whole other part to the house, made of an old store that was down the road in Wabasso and it is beautiful too. Florida, Florida, Florida.
I took pictures but they suck.

I would be perfectly content to own that house with its two bedrooms and funky kitchen and front porch. But no. There's more. An old train depot has been moved onto the property and that's where the current owners actually live. It's nice but not nearly as nice as the old house. I love the way it's all been decorated though. 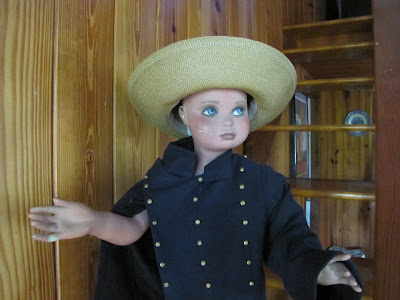 And there are two other buildings on the property, one set up as an apartment, one barebones but darling on the outside.
And...there's a boardwalk through the jungle to the river. Palms, bamboo, ferns, you name it.
Florida, Florida, Florida.

So kids- hey! If you ALL moved to Roseland with us, we could do this thing. There's a place for everyone to live. The family compound. You know you've always wanted to do that! There's a medical complex right down the road where Jessie could work and there's a Publix right down the road where Lily and Jason could work and May and Hank- y'all could find something! We'll start a business! Yes! We will! And we'll all live on the Baisden property in the compound and we'll fish and canoe and eat citrus and mangoes and avocados and plant a big ass garden and flowers everywhere and build a giant cement pool with mermaids at the corners and turn old outbuildings into studios and tool sheds and potting sheds and work rooms and GOD DAMN! IT'LL BE AWESOME! There's an elementary school nearby for Owen when he's ready.
And, and, and...
Shit.
A girl can dream, right?
Are you with me kids? Are you playing the lottery?

Can't you just see it?

We could have chickens!

But still- can't you just see it?

Think about it, kids. Get back to me.

Love...Your mama who wants us all to live in Roseland by the river in the old Baisden house.

P.S. There is room for more than just the immediate family. Kathleen? Williamsons? Lunsfords? You in?
RSVP ASAP.
Because...OMFG!
Posted by Ms. Moon at 5:06 PM