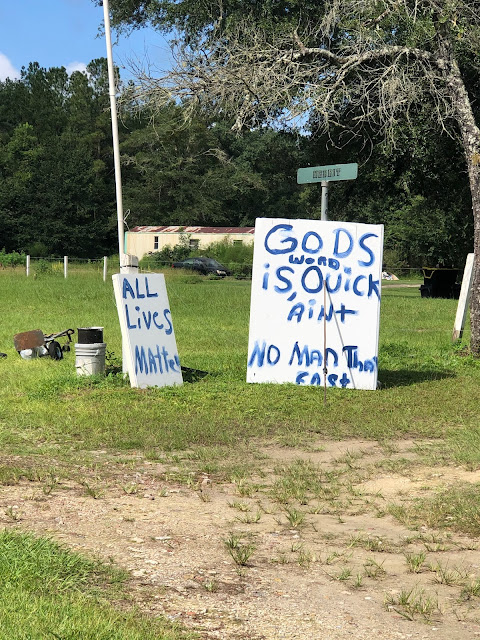 I braved the heat and the mugginess this morning and went out for a shortish walk up to the county line and back which is two miles which is nothing but in this heat and after over a month of relative inactivity, was plenty. I saw that No Man Lord had put up yet another new sign and I love it so much that I had to stop and take its picture. Can you read what it says?

"Gods word is Quick. Ain't No Man That Fast."

Tell me he is not a poet.

The sycamore trees are beginning to turn rusty. Here's a quite large one I pass by. 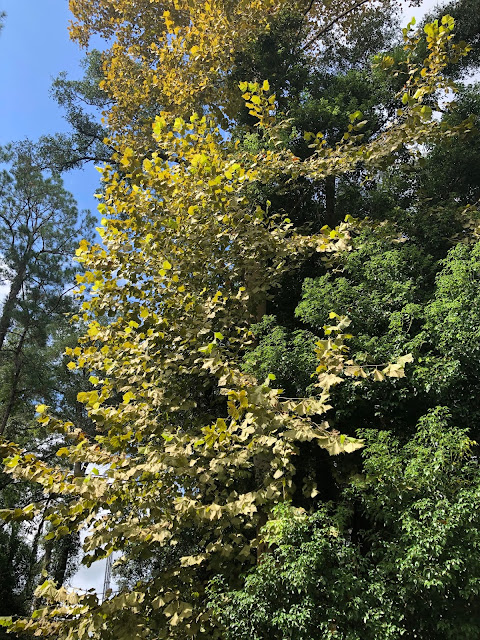 Even here in North Florida we get some color as the season changes. I took a picture of what the hurricane lily looks like today. I swear it's grown at least eight inches since yesterday. Here's the head of it, the blossom end. 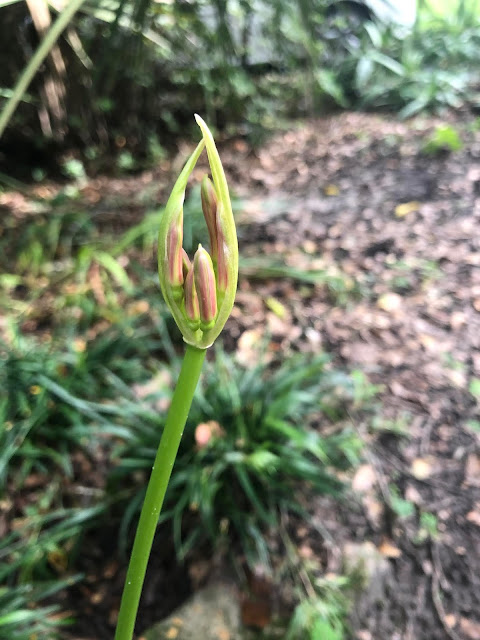 I'll take another shot tomorrow.
I rewatched the video of how to make the mask I wanted to try and I have now made two. I am quite pleased with the pattern. It is very easy and very quick to make up. Here I am, wearing one. 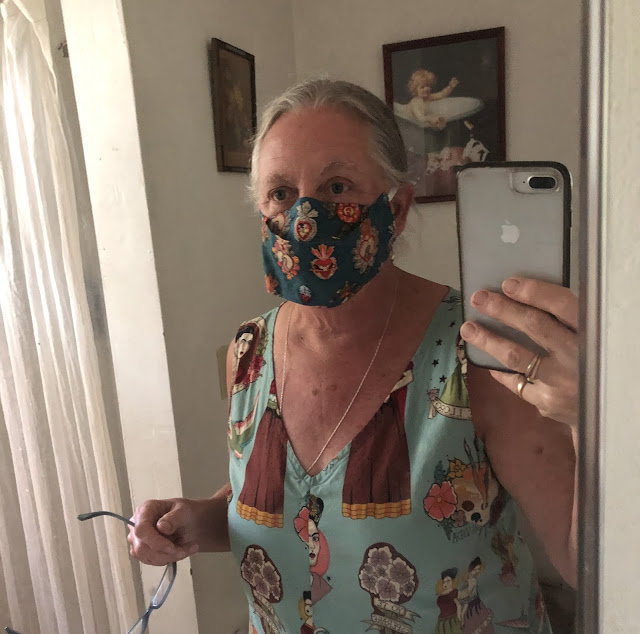 It's not perfect by any means but it'll do. It's got so much room to breathe and talk. I've made Mr. Moon one out of a little bit of black silk that I have had forever, leftover from when I made him a pair of comfy pants. I put a piece of interfacing in that one to make it sturdier and more effective. I hope he likes it. He had to go to town today with a list as long as his arm and is not home yet.
So I feel as if I have accomplished something at least today.
Jessie sent a picture this morning of the boys first day-not-back to school. It made me laugh. 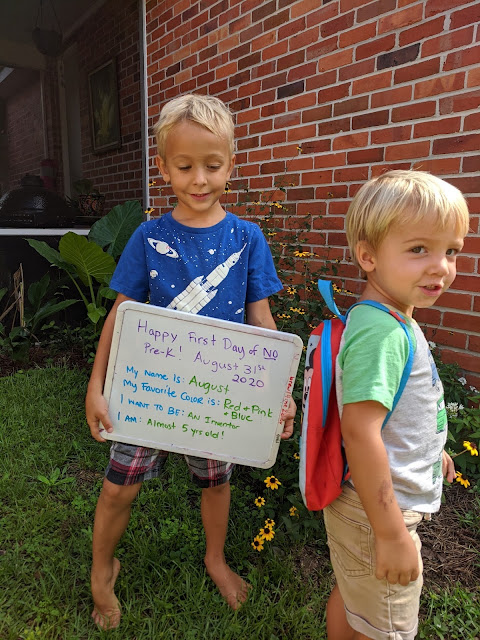 Lily had an anxiety-filled morning wherein the internet connections to the kids' schooling wasn't working and Maggie was being Maggie and no one was answering her emails asking for advice and of course the phones were all busy.
She said it got better but I know she was so stressed out. This is sort of ridiculous. But somehow, it will work. She will manage. Her children will learn. After school was over, they all went to see Melissa who fixed up Magnolia's hair, gave Gibson a haircut, and trimmed Lily's. Lily said it was the biggest social event of the season and that of course it was so good to see our darling Melissa. 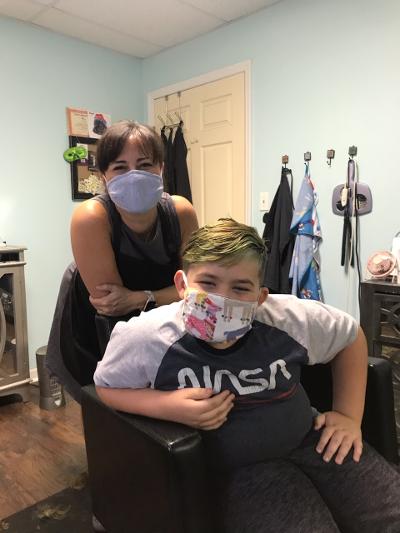 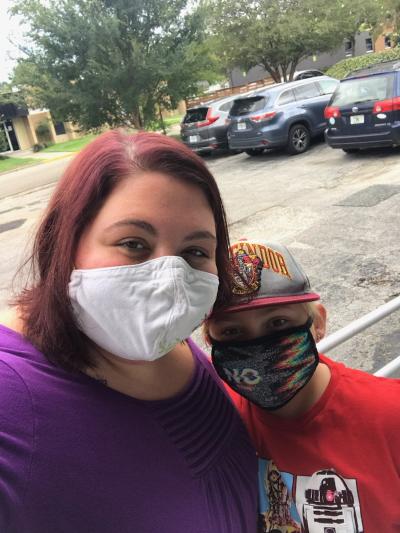 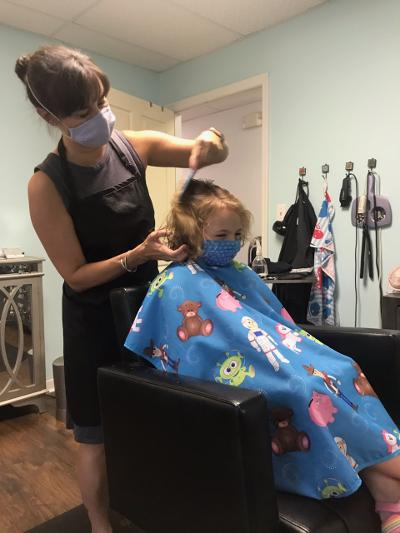 I'm so proud of how all of my children are dealing with the virus, even now, months later than when we ever imagined we'd still have to be taking such deep precautions. Mr. Moon and I were talking this morning about how we're just about ready to loosen things up a bit. Owen told his Boppy the other day how much he wants to go fishing with him and I told him that if they both wear masks, especially in the car, they should go. I keep thinking about what my doctor said- quality of life has to be considered. My husband has been living to take his grandchildren fishing since he ever considered the idea of having a grandchild at all.
Well, we shall see how things go.
Here's a picture of Maggie, all trimmed up. 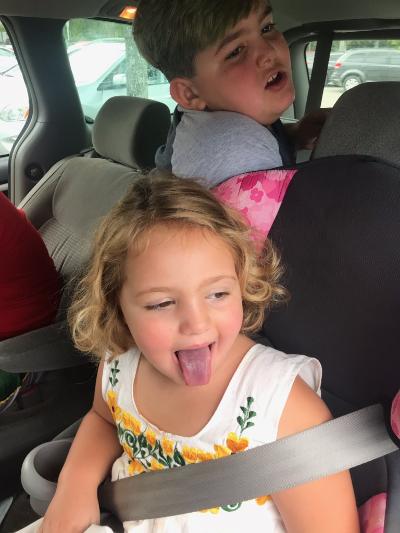 It's also a picture of her tongue. That girl. Gibson looks quite handsome, I think.
Like Linda Sue has been saying, I'm thinking a lot about how how different things were when this whole pandemic started. How we all watched Tiger King and couldn't find toilet paper in the stores. How after about a week people were posting pictures showing how wildlife was making a comeback all over the world. How everyone decided to make their own bread and yeast was as precious as gold. How we all felt like we had a mission- to do the right thing to prevent the spread of this disease. How people applauded and whistled and beat on pots and pans at seven in the evening to thank our front-line workers. How Italians sang opera from their balconies.
How we all thought we'd be back to "normal" life by July.
Oh, how silly and sweetly innocent that all looks now. There is plenty of toilet paper; yeast and bread flour can be bought anywhere. Wildlife is still endangered. Medical workers are still completely overwhelmed and there are even more people risking their lives in other occupations because things are opening up way before they should. There is still no vaccination. There is still no real consensus on the best treatments for the disease. There is no contact tracing, there is even less worry about testing.
And some of us still haven't hugged our loved ones since March.
And at the RNC chairs were placed right slam up next to each other and hardly anyone wore a mask and worst of all- our country is suffering in ways that we could not even have imagined four years ago while our citizens have not been this divided since the Civil War.
Our president incites violence daily and his fans, his base, his minions, his deluded deplorables cheer him on, strap on their automatic weapons and pretend to be patriots.
But hey! I gathered seven more eggs today!
We go on, we go on, we go on.
Love...Ms. Moon
Posted by Ms. Moon at 6:35 PM