May Your Devices Always Pair Successfully 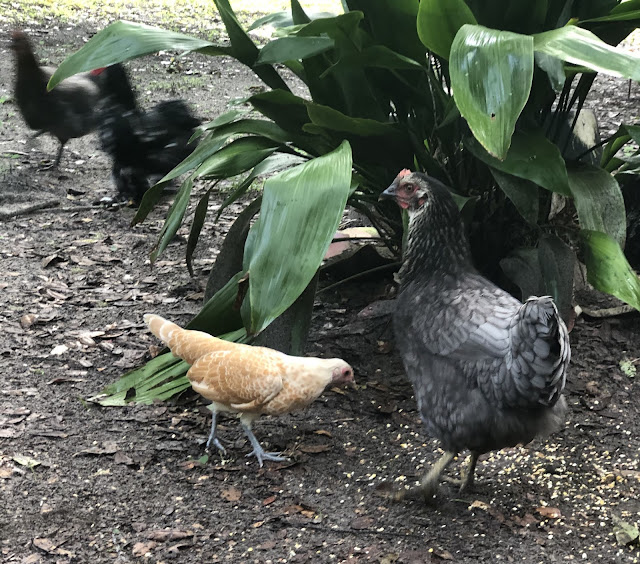 Here's a pretty decent picture showing the tininess of little Miss Tweety. The hen beside her (Grace? Robin? Eggy Nancy?) is a regular sized hen. She's like a stork canary. I swear. Either she's still not laying or else she's hiding what must be her miniature eggs. A lot of the hens aren't laying yet either. I assume. I have sixteen hens and I'm only getting from three to five eggs a day. The age at which they start laying depends a lot on what breed they are but of course I know nothing about the particulars. Neither Darla or Dottie have begun laying again after their broodings but I have noticed a lot of white feathers about and so I suppose the fall molting has begun. Even Liberace has lost a few of his pretty tail feathers.

So today was just...meh.
A day. I did do one thing that brought me a modicum of happiness. About a week ago Mr. Moon lost his earbuds and I offered him an old wireless set of mine. I'd thought it was broken and had bought a new set and then I figured out how to fix my old set so I had that as an extra. The problem came when he tried to pair his phone with it. The brand of both the extras and the ones I've been using was the same although different models and I have no idea if this was part of our problem or what but we just could not get his phone to recognize the ones I wanted to lend him and in the midst of the attempted pairing, somehow my phone would only pair with the old headset and his would only pair with my newer buds.
In short- insane.
And we tried everything up to and including wiping our network preferences off our phones and reinstalling them. Eventually we just settled for him with my newer buds and me with the old set. Which didn't really make either of us happy. He finally gave me back the newer ones saying that they did not fit his ears and I was determined to try and get my phone to recognize and pair with them again because they fit my ears perfectly.
This became my new hobby for a few days. I'd spend a half hour or so every day trying to figure out what was going on and how to make it work by googling and trying different remedies. Finally today I did the whole resetting of the network preferences again and then the earbuds did indeed and cheerfully tell me that they had successfully connected to my phone but my phone had obviously not been made aware of that fact and I sighed and put the earbuds back into their clever little charging pack and gave up and then thought I'd try one more thing and by god, the damn things connected as soon as I turned them on.
I felt like I'd solved the Houston-We-Have-A-Problem problem even though I have no idea how I did it.

Beyond somehow engendering that stroke of luck, I've cleaned the hen house and given the nests all new, fresh, fluffy straw which the chooks will have pooped up by tomorrow morning. And done laundry.

We're getting some rain right now and we got some last night. The thunder and lightening were so close and heavy that the house shook. Between that and two different cats trying to access my chair to sleep with me causing great hissing and growling and the knocking down of random items to crash on the floor, I didn't get the best night's sleep. Oh well. Maybe tonight will be better.

I'm still thinking of how August demonstrated to me yesterday how to safely climb my stairs. He was under the impression that I'd fallen on the inside stairs and not the back steps. He showed me how to hold on to the balusters very carefully and how to climb very slowly. I was grateful even though that wasn't where I'd fallen. When I explained this he wanted me to re-enact the fall so that he could see how it happened. I showed him and he is most impressed with the new anti-slip strips that Mr. Moon has installed. But I'll never forget how he slowly climbed those stairs, holding on tightly, as he not only demonstrated but told me, doing the best that he could to prevent his old Mer from falling again.

I think that I've missed hearing what the grandchildren have to say almost as much as I've missed kissing and hugging them. Or maybe even more. These conversations are hard to have when you're outside in the 90 plus degree heat battling mosquitoes, and arise far more organically while you're doing other things together. I have always felt that children have a great deal to say and it has been my experience that indeed they do and it is edifying and charming to hear exactly what it is they want to tell me. I take them quite seriously unless they're obviously trying to be funny and then I feel free to laugh. That, too, can be interesting- to hear what it is that they think is amusing. One of the most beautiful things in the world is watching a child's sense of humor develop.

All right. Time to make supper.

This is Florida in August.