Play With Me, Mer! 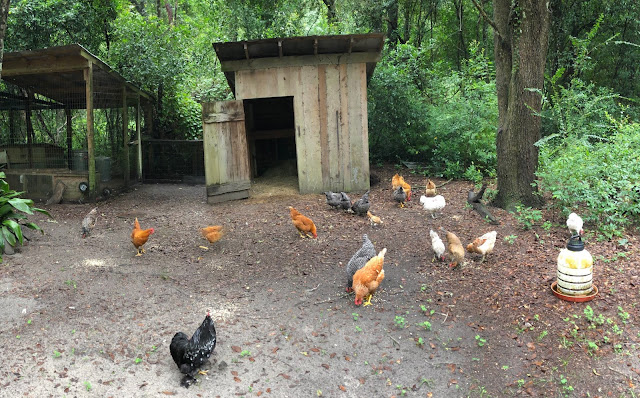 That is my pathetic attempt at a panoramic photo of my chickens as they are eating their scratch in the morning. If you count, I think you'll find eighteen even though I only have seventeen chickens and that's because one of them moved faster than I moved the camera and so was caught twice. Probably the one there that looks like part of a chicken, third from the left in the back.
Oh what fun we have here in Lloyd!
Mr. Moon and I were just talking yesterday about how Fancy Pants hardly ever crows and we wondered how in the world he was going to have his own flock and lo and behold, the little man began crowing a lot. His crow is short and rather pathetic (don't tell him I said that) but it's his own personal crow and maybe it will develop as time goes on. I saw the bold bird try to jump on one of the gray hens yesterday and really, he needs a step-ladder. She just shrugged him off and went about her business.
Poor guy.
And poor little Miss Tweety if she's the only hen he can mount and please dear GOD don't let Liberace try to fuck her. He'd kill her. 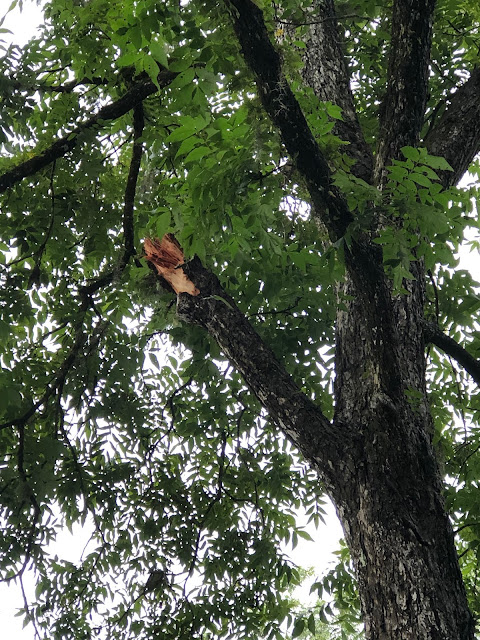 So yesterday when I got up I realized that a branch from the pecan tree was hanging down over the roof of the porch in an unnatural way. At that time it was still attached to that branch you see above but it had cracked and was broken and all of the rain we've gotten had soddened and weighted the limb and as it dipped it pulled another branch down and it was sort of a mess. After much examining of the situation, Mr. Moon decided to ask Vergil if he'd come out and help him get the limbs down. In a bit of synchronistic fortune, Vergil's test results came back this morning and they were negative. So Jessie and the boys came with Vergil to play while the men worked.
Before they got here, Mr. Moon got things ready. He put up a ladder and got out all the tools he thought he'd need and pulled the truck right up to the back porch. He was in the shed getting something else and I was sitting on the porch and all of a sudden I heard the crack and rip of the branch and down it fell, completely missing the new AC unit AND the porch, landing right where my husband had hoped to set it himself. 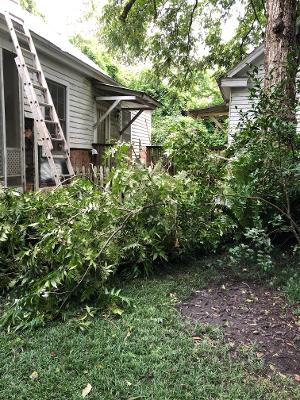 TA-DA!
We think that the ladder helped place the branch where it should go as it slid down it, almost like it was a guide.
It did not, however, pull down the other branch which was now laying precariously on the porch roof, still connected to the tree. So the men had a project to do even though part of it had been done for them.
While they did what they did (and I'm not sure what that was), the boys and I did some stuff. Mostly we read books and also, Levon wanted me to do the Mr. Ratty puppet which I did. I love being Mr. Ratty. He is the most darling puppet and can move his mouth and scratch his head and groom his whiskers and give hugs too. Levon couldn't even talk to Ratty. I think the power of his authenticity overwhelms small children. I'm not even kidding. But that was sweet fun and Levon also wanted...wait for it!...the tractor book and the dump truck book. So of course I read those. And then there was Duck In A Truck, which Jo from Ireland sent me when Owen was very young and which is definitely in the top five books that my grandchildren have loved. August listened to that one. He's over the dump truck book and the tractor book.
The boys and I talked about stuff and then Jessie and I made some lunch. We had an array of sandwiches from tuna to peanut butter to ham, along with cherries and chips. It was so nice to get to eat with Vergil. 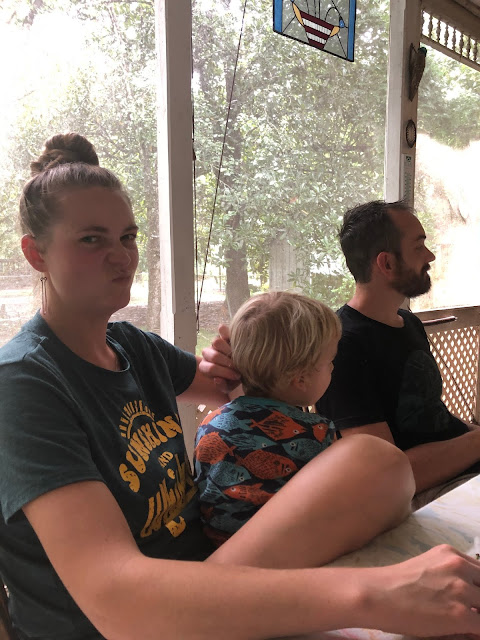 August kept pretending to call his grandfather and his dad on the old plug-in phone and Vergil made me laugh so hard when he said, "Hold on, let me put you on speaker phone," because August was about four feet away.
While they were here, Lily called for real and we had a FaceTime visit with all the grands which rapidly got way out of hand. Maggie had put together a puzzle that I'd ordered for her and wanted to show me but then she started being a wiggling worm and so August and Levon did too and Owen and Gibson could barely get a word in, but it was fun.
The level of chaotic hysteria continued on here. I asked the boys to pose for pictures and this is what I got. 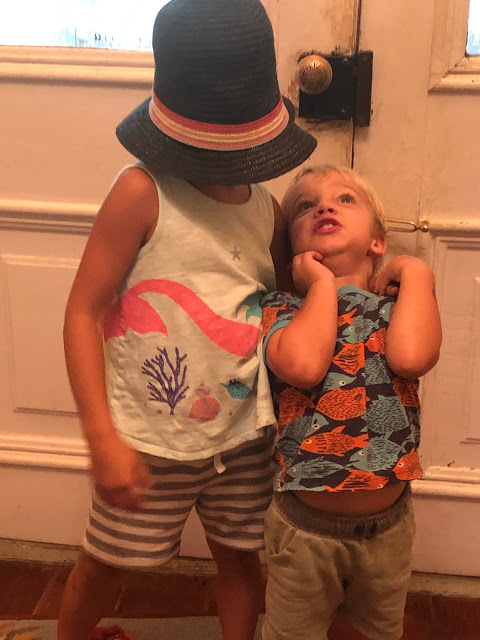 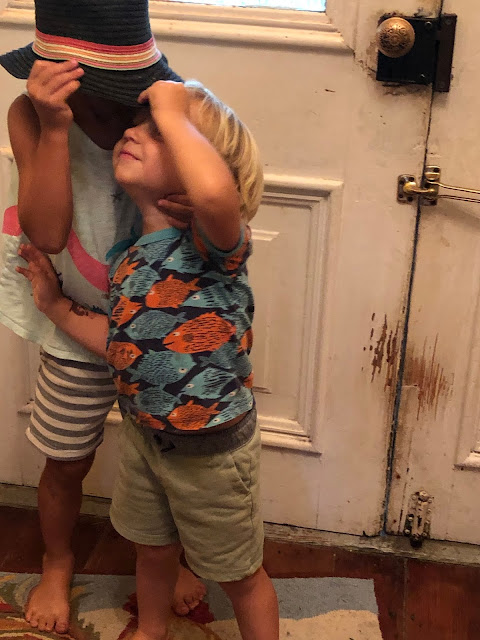 Earlier August had informed me that he'd been riding the horse in the library so fast that his hat had fallen off so I guess this was his solution to the hat-falling-off problem.
The Weatherfords had to leave soon after that as Levon was in need of a nap and wilting. Mr. Moon finished up the limb project, cutting and hauling all the pieces of branches and I was a lazy old lady and did very little.
I am making the best supper in the world tonight which is tacos made with venison and Old El Paso taco seasoning, Ortega crispy taco shells and all that other stuff that make tacos so great. I think I bought those taco shells when I was doing a panic buy and my brain had gone into survival mode. But hell- why not?
I've got a flan in the oven but I'm not sure how that's going to turn out because instead of grabbing sweetened condensed milk at Publix, I accidentally bought dulce de leche (probably during the same shopping trip I bought the taco shells) and I'd already made the sugar coating so that may or may not work. I'll let you know. Lord knows it'll be sweet enough.
I can hear thunder booming to the south. We've had rain on and off all day and in fact, both Vergil and Mr. Moon got soaked this afternoon. I do believe this is related to Tropical Storm Marco and I haven't even checked to see what Laura is doing. I hope it hasn't taken a quick hook to the east.
So it goes, so it goes. I obviously am more cheerful today than I was yesterday and I am grateful for that. And for so much more.
May all be well with you.
Love...Ms. Moon
Posted by Ms. Moon at 6:38 PM