I May Be Crazy But Not That Crazy 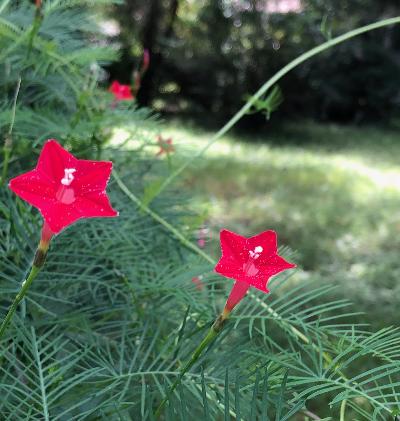 Well, I've felt more "normal" today than any day since I fell. I even took a nice little walk down to No-Man-Lord's house and back and to the post office which is about one and a half miles and although it was like ninety degrees and who knows what the humidity was, it wasn't bad. I've been thinking about those pretty red flowers that grow on my neighbor's fence and there they were today. I'm glad I didn't miss them. Every year I look them up and every year I forget their name. I looked them up again today and that is the cypress vine. Cypress trees have needles like those of the vine and so there you go. Will I remember this next year?
Oh hell no. I won't remember it next week. I would learn so much if I went back and reread all my blogs. I would be amazed.
And then I would forget it all again.

When I got to the post office, the mail lady had already shut her window because it was after twelve. Here in Lloyd we only have clerk hours until noon but we're lucky to have that. As I opened my box, I heard her call from the office behind, "Hello!" and I answered back. I saw I had a slip for a package in the box and she said, "I'll get that for you."
This is how things go around here and I love it. Rules are rules but hey! She had to slide her window open again to hand the package over and I toted it home along with my mail. It was the puzzle that I ordered for August and Levon. 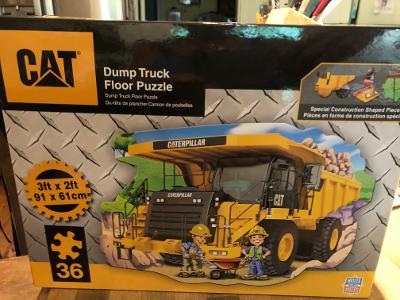 I know at least one little boy who's going to like it.
I spent the rest of the day doing things in the house. I thought about doing a closet clearing and I reached for a linen shirt that I haven't worn for a very long time and I thought, "Yes, this can go," but immediately I thought about the night I'd worn it in Cozumel with a pair of white linen pants and we'd had such a good supper and the beers were two-for-one and we couldn't finish all that beer and so we left some for the waiter who hid it for later and we were co-conspirators and then we went and played mini-golf which was right across the street from Pepita, the hotel we stayed in on our first trip to Cozumel in 1987 and how it was so magical. We were the only people at the mini-golf and the attendant played the music we asked for and there were iguanas hanging out and pretty birds in cages and we laughed and we laughed. Of course they sold drinks at the mini-golf. They sell drinks everywhere in Cozumel. The National Park has waiters wearing white who trudge through the sand barefoot taking your orders for pina coladas and nachos.
So. Did that shirt spark joy? Yes. Yes it did even though I may never wear it again. Marie Kondo's definition of sparking joy may be different than mine.
That whole entire memory and train of thought went through my head as my fingers were on the shirt and I let it stay and sighed and walked away from the closet.
I did, however, bake a loaf of bread and did some laundry which is all dried and put away now. I've got some chicken thighs cooking in a red sauce with chopped eggplant and peppers and onions and mushrooms and garlic in the crockpot and I also sat on the couch and did a little more mending on my old, old dress. 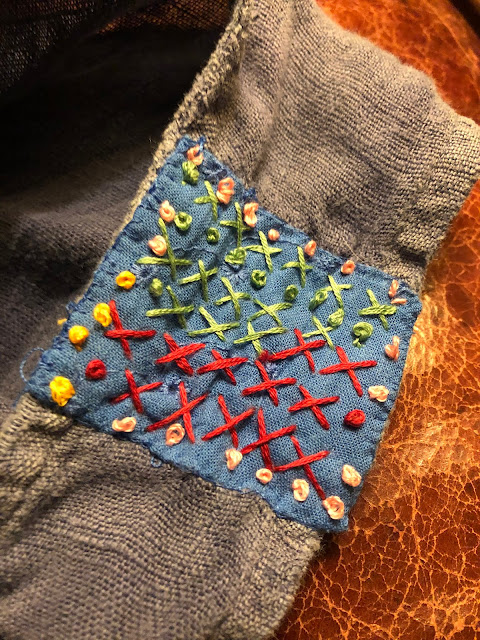 That's one of the shoulder straps. The fabric had completely worn away there. I've started on the other side where there is not yet a visible hole but the you can see right through the fabric. This is all so ridiculous. Not only is the dress threadbare, it's also so faded from its original perfect sky-blue that at this point, it's more memory of a dress than actual dress.
Ah. Back to memories again.
Perhaps I can just spend the rest of my life patching and decorating this dress and when I die, they can put me in it for my cremation.
In a related topic, I am now watching the next-to-the-last season of "The Office." Dear god, what am I going to do when I've finished watching it? Those characters have become my people, my family, my friends, my escape, my entertainment, my soothers and comforters.
I'd say I was crazy but I doubt this is the craziest thing going on right now in this strange and sometimes horrifying world.
Which brings us to Jacob Blake.
I can't even talk about it. How does this keep happening? Not only have cops paralyzed him, they've fucked up his kids for the rest of their lives.
I can't. I can't.
And then there's the RNC which I have not watched one second of because what's the point? Do I need to hate these people even more than I do now?
Give me  "The Office". Give me embroidery thread. Give me a garden that needs clearing and dirt to plant seeds in and give me vegetables to chop. Give me books and give me crosswords. Give me vinegars and oils and sourdough starter and flour and give me children to read to and a husband to cherish and give me chickens. 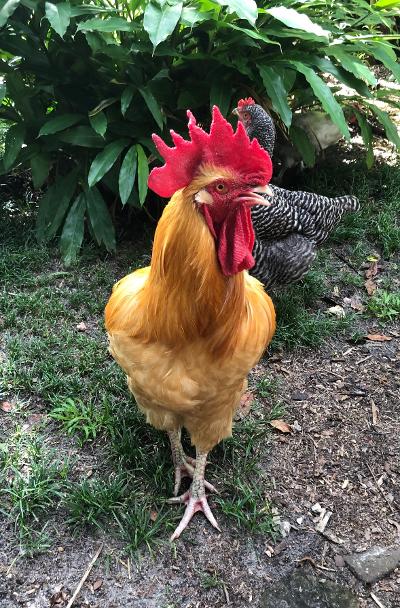