And Have You Heard About The Asteroid Which Will Hit The Day Before The Elections? 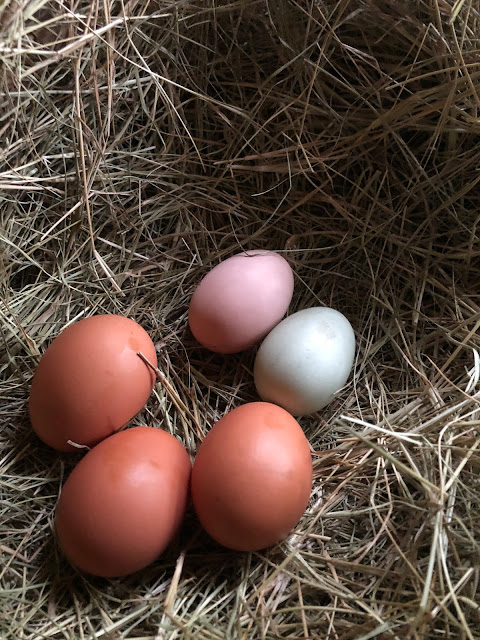 Here are five of the six eggs I found today. There was one more in another nest which I believe was Miss Susie's. I'm going to have to start selling those things. Or giving more away, most likely.

So the big news is that I slept in the bed last night and I was comfortable, on the whole, but my ribs have ached all day which is not comforting at all. I guess lying down in the chair, even though it's relatively flat when it's reclined all the way, puts my center of gravity nearer my butt instead of my ribs. Or at least there's less pressure on them. It was nice to wake up in my own room again, though.

Lily sent a series of pictures this morning which were alarming. 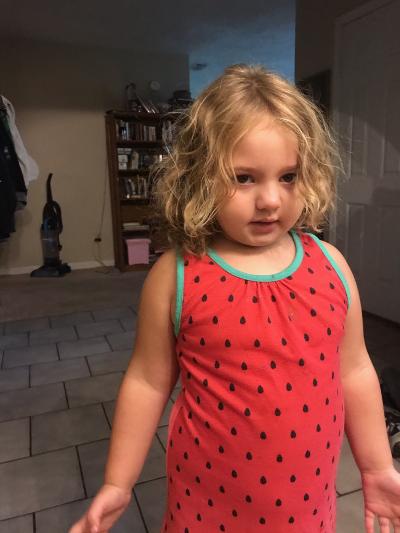 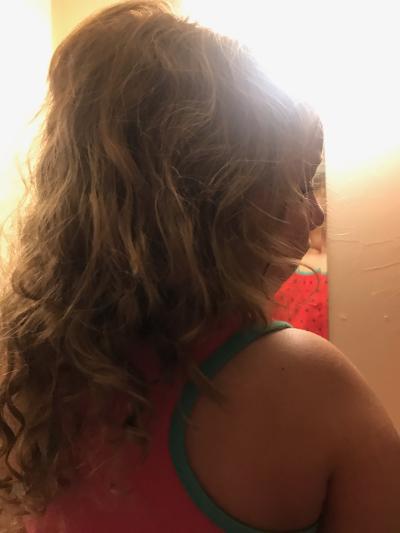 Maggie decided to cut her hair which is something that all children do at one point or another unless one of their siblings does it for them. Lily was beside herself with grief. Maggie's hair has never been truly cut, just trimmed a little bit for fun and those curls she had were her first curls and no matter what, she'll never get those back.
I can't even bear to show you the picture where Maggie herself is crying. It's too heartbreaking. And of course she's still the cutest girl in the world. Here she is after Lily washed her hair and dried it. She still has curls. 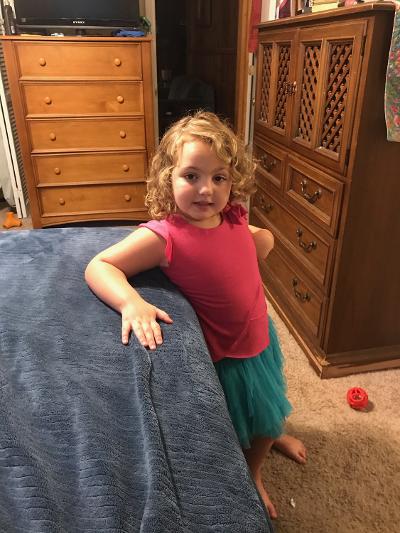 She's still our sassy Miss Thang.
But I understand Lily's grief. Those curls are Magnolia June's glory and what a glory they are. Still. But the rich abundance of them has been somewhat diminished. And they were part of her babyhood and with every step that our children take away from that stage of life our hearts ache a little. That's just the way it is.
And my heart has ached today too. Not so much for Maggie's curls. I know this happens and I know she's still beautiful and I know that hair grows. I don't even know why I've been so down. Is it because yesterday was my dear Lynn's birthday? I don't even know how old she would have been. Sixty-nine? Seventy? She was always so timeless. I just looked up her obituary. She would have been seventy-one. That is unbelievable to me. Almost as unbelievable as the fact that she's been gone for twelve years.
I probably would have said seven years, eight at the most.
Time. There is no stopping it, that wily, slippery concept.
But I don't think that's entirely the reason I've been so filled with the black-dog funk. It may have something to do with the weather which has been gloomy and swampy all day. Even when it's not raining everything is just wet. Of course it could be so much worse. We could be on fire here like they are in California. Wet would be most welcome there. Somehow knowing this doesn't help and in fact, makes it even worse because thinking of how the planet is giving us obvious and undeniable evidence that we've fucked it up is not a pleasant thing to ponder.
Maybe part of my mood is missing the children and grandchildren. Some days that missing becomes overwhelming. I wish I could hold Maggie and tell her how beautiful she is and that she is a smart, strong, amazing little girl. I want to have conversations with Owen and with Gibson, one-on-one, sitting close together. I want to be able to hug and hold my son and my daughters and their beloveds.
I was thinking this morning about the days when I'd tell Owen the Mr. Peep story that always made him fall asleep at nap time. How I knew those days were precious even then and how now, looking back, that story about the old turkey who played and played all day until he grew weary and needed a nap of his own, is something that I hope the mind-erasing years of old age never touch.
Perhaps I'm just thinking about getting old and dying. One may think that one is accepting of death but when the years get shorter and the math starts being done, that acceptance is a little harder to maintain, becomes a little less of a cosmic concept and more of a personal issue.
Oh, sigh.
Who knows? Maybe I just have the saddies, as Sue used to say. No real reason, just a gloomy Sunday.
But hey! I ironed some shirts! Mr. Moon does need a few nicer shirts to wear into town when he goes to run errands. So I set up the board and plugged in the iron and turned the TV on to "The Office" and now he has six crisp, smooth shirts to wear.
I wish I could say that thought brings me pleasure but that would not be much of the truth. Maybe a little.
I scrubbed a window sill and a doorway. All that did was to reinforce the knowledge that this whole house needs every sort of tending from deep, deep cleaning to pressure washing to painting. Not pressure washing on the inside, although that would be helpful. If mold and mildew are deadly, we should have gone to glory a long time ago.
Elizabeth sent me a poem yesterday. I keep going back to it. It reminds me that well, yes, this is who I wanted to be. Every time I read it I love it more.
HereHere I am in the garden laughingan old woman with heavy breastsand a nicely mapped facehow did this happenwell that’s who I wanted to beat last    a womanin the old style     sittingstout thighs apart undera big skirt    grandchild slidingon     off my lap    a pleasantsummer perspirationthat’s my old man across the yardhe’s talking to the meter readerhe’s telling him the world’s sad storyhow electricity is oil or uraniumand so forth tell my grandsonrun over to your grandpa    ask himto sit beside me for a minute    Iam suddenly exhausted by my desireto kiss his sweet explaining lipsGrace Paley (2000)
I'm not sure I'd call my face "nicely mapped" but besides that...yes.
Thank you, Elizabeth.
Yours Truly and Much Love...Ms. Moon
Posted by Ms. Moon at 6:31 PM