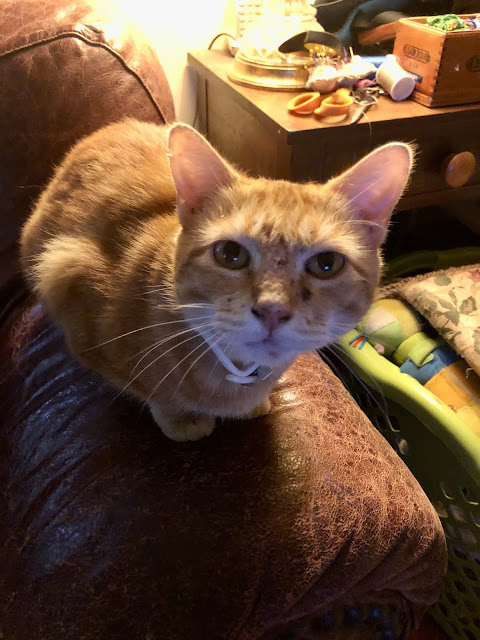 Here's sweet Maurice with her Jack-scarred face. She's been spending most of her time in a new place which is on a pillow on a buckwheat cushion on the floor of the Glen Den. The buckwheat cushion may or may not be a meditation cushion and which I may or may not know how it got here. I think someone told me but I've forgotten. I certainly never bought it.
Jack has been annoying the crap out of me lately. Not only does he beat up Maurice every chance he gets but he also has taken to sleeping right outside the Glen Den so that he can attempt to kill her if she should make the mistake of leaving the room to eat or go outside to attend to her toilette. And last night he insisted on sleeping with me in the chair and woke me up about fifty times by moving or grooming or whatever the hell he was doing. I pushed him off a few times but he got right back up and it's hard to argue with a ten thousand pound cat (that is exactly what he weighs at night) who has toe daggers.

Okay. That was fascinating.

August and Levon were supposed to spend the night tonight but in a bizarre twist of fate Vergil got sick this week and although he is fine now, he got tested for Covid of course and Jessie wants to wait until his results come back. To be honest, it would be easier for me if I was able to sleep in the bed while they're here instead of the chair for a myriad of reasons. This is disappointing but we are all getting good at patience.

What else?
Not much. I watched Joe Biden's speech last night and in my heart I think he's truly a decent man. As would anyone who's spent an entire lifetime in government, he's made some mistakes but I do think he's evolved. Also- if there were truly any real scandal about the man it would have been revealed by now. A little plagiarism, a tendency to stand a little too close to people, a rather advanced age- these are all nothing compared to what we're dealing with now. I love the fact that although he's a very practicing Catholic, he's a staunch supporter of a woman's right to choose and I believe he came out before Obama as being a supporter of same-sex marriage. And he obviously adores his wife, the amazing Dr. Jill Biden, and family and he's been through enough tragedy to give him incredible, deep, and true compassion.
Also, he's not Trump. And that is all that really matters to me right now. And Kamala Harris is not Mike Pence. To be quite honest, I think that they could have one of the best administrations ever if things go well.
I will not lie to you though- I am scared to death that we won't get the chance to see. And if Trump is elected for a second term, there will be absolutely no stopping him. It does seem as if the winds of change are blowing with Republicans coming forward and announcing their support of Biden and with former staff members doing the same. Or at least the ones who haven't been arrested.

On to hurricanes. Looks like the first storm to get close is going to pass right over Cozumel before it gets to our area if indeed it does which it may not. The folks in Cozumel are predicting just a tropical storm with some rain and not very high winds. It'll be there by tomorrow. That one doesn't even have a name yet and is still a tropical depression. The one following that is called Laura and is a tropical storm and that one has more of a potential to affect us and to develop into hurricane status. This probably means nothing to most of you and there's no reason it should. If you live in Ohio, there is absolutely no need to clutter up your brain with the difference between tropical depressions, tropical storms, and hurricanes. I'll just let you know if I personally am in danger because it's all about me. Right?

Wrong.
And yet, we all cannot help but see the world through the lens of our own eyes.
How fucking profound was that?

I better go pickle some onions and cabbage to go on our black beans. There will be avocados too. I'm pretty excited.