Whether it's because I have been relatively busy all day long or because of reading about last night's RNC at the White House with 1500 desecraters not wearing masks combined with all of the rest of the horrors, I do not know.
All I know is that I am tired.

I went to Publix today and got that out of the way. Nothing outrageous or exciting happened. When I got to within a block of my house, I saw Pinot trying to wave me down. At first I just went on by. I have no idea why except that I was really focused on getting home. I got to my house, turned around, and went back.
"You need something?" I asked. "Just a ride," he said. It was raining a little bit.
I cleared the passenger seat and he got in and I realized that he was wearing a mask and that I should be too. I put mine on and said, "Here. I'll be a good person too."
I swear, I would have completely forgotten about any Covid threat if he hadn't been wearing his mask.
He wanted a ride down to No Man Lord's place. That's how he identified it too. "The yard with the cross and No Man Lord."
In the short amount of time it took to get there he re-established the fact that we were both born in 1954 and that my name is Mary and his is Pinot. I told him about breaking my ribs and explained that that was why I haven't been walking lately. I am not sure why I thought he had even noticed. I doubt he has. I asked him if he'd ever broken any ribs.
"No," he said. "But I've been busted up pretty bad."
I can only imagine that he has. Pinot has not had an easy life.
We got to No Man Lord's place and there are new signs. One said, "I AM My Brother's Keeper. Amen." Another said, "All Lives Matter." Despite the fact that NML is Black, I can see exactly why he'd put up that sign. To him, I am certain that all are important to his god, regardless of any outside or inside differences. All of us are his god's children.
Before Pinot got out of the car he said, "When's your birthday?" I told him "July 28th."
"When's yours?" I asked. He named a date in March that I've already forgotten and I laughed and said, "Ha! You're older than me!"
He laughed too and said, "That makes you feel good, doesn't it?"
"Yes it does!" I said and laughed some more. Then I said, "Not really."

We said our take-cares and I drove home and I was glad I'd gone back to see what he needed.

The rest of the day I just did house stuff. Laundry and bed-making and I made a blueberry pie. 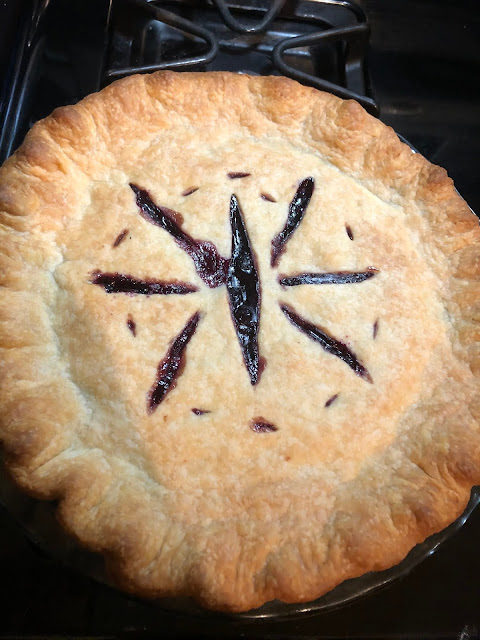 Mr. Moon had bought a bag of frozen blueberries when he was doing the shopping because he likes to put them on his cereal but he's used to the small, wild ones I get at Costco and the ones he got were the plump ones from Publix so I used them all up in that pie. I hope it's good. The pastry looks to have turned out well.
We got a text from Lily. Owen has gotten his new pet rats. Have I discussed this before? He's been getting ready for a few weeks now, collecting the things he needed either through people giving him things or buying things with his own money. He was going to get two but the pet store had three left and they did not want to leave one all alone so they came home with Bailey, Queenie, and Poppy. 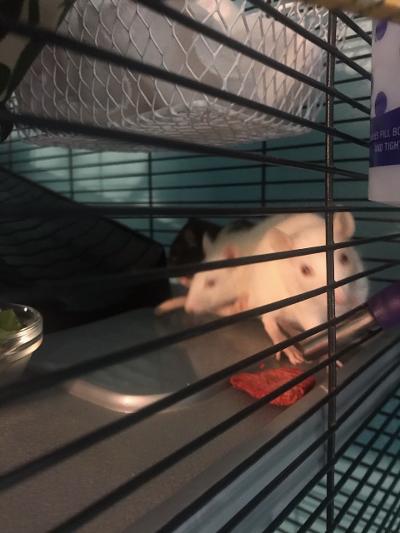 For some reason I had forgotten that rats can be white and had envisioned something more like nightmare-gray sewer rats so their nice, tidy appearance makes me feel a little better about Owen owning rodents. I texted back to say, "My new great-grand rats!"
I know O's excited. He's always been such a nurturer.
I really don't have anything else to say this evening. Too tired to even think properly, if indeed I ever do these days.
Let's all get good sleep tonight, y'all. And take your vitamins and eat your vegetables and just take care of yourself in general. This is not the time for any of us to fall out. We've got work to do and votes to cast and hearts to bless.
Every dang one of us.
Happy Friday.
Love...Ms. Moon
P.S. 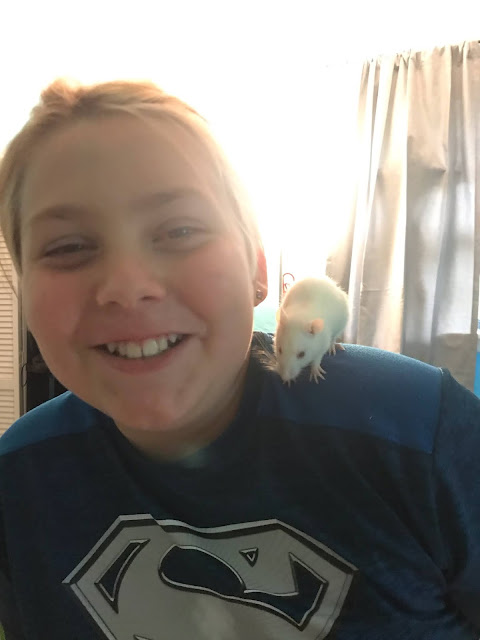