Not Much But Here It Is 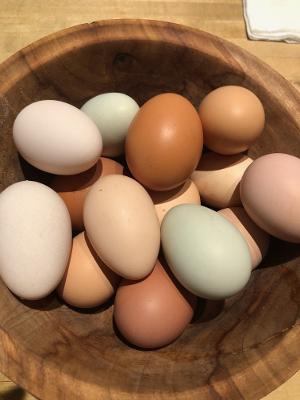 This is two days' egg haul. As Mr. Moon said, "We're back in the egg business!" Eight yesterday, seven today. And there is the potential for plenty more if all the hens start laying and laying where we can find their eggs. But as they say, "Don't count your chickens before they're hatched," and as they should say, "Don't count your eggs before they are laid."
So. It has been a Sunday but not a bad one. I slept another nine hours in the bed last night, waking up from a back-in-the-dorm dream wherein I couldn't figure out what to wear. There was a boy I'd set my eye on and another girl was trying her darndest to drag him into bed but I just bided my time, waiting for the fella to get tired of her tacky and obvious behavior and come to pursue me.
I have no idea who this boy was. To tell you the truth, I remember more about the different outfits I was trying on than I do about what he looked like.
It started raining this morning and so Mr. Moon decided to re-vacuum the house and re-spray for fleas. Therefore I could not go either inside or outside and so I sat on the porch and did a Sunday crossword and was simply lazy. After it quit raining I went out and pulled a few plants that were in the wrong place and repotted an avocado tree that had grown way too big for its pot and in fact was falling over. I put it into another pot- a huge one- where it's not going to get enough sun but the pot was too big to move and so it's root hog or die for the avocado. I looked at a pattern for a mask that resembles one that Jessie had the other day which both Mr. Moon and I admired. It looked something like this. 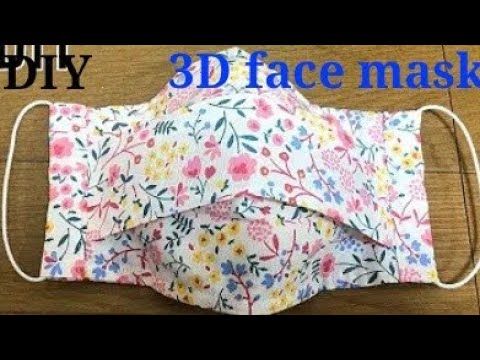 The extra part there allows you to speak and breathe more easily. Of course all I did was look at the video of how to make it because I couldn't go into the house to get out fabric and set up the sewing machine. Who knew that there would be a time in our lives when the idea of a more breathable, talkable mask would be a thrill?
Not me, baby. Not me.
Jessie sent a picture of Levon lining up pictures they'd printed out of large machines for coloring. The boy was getting them all in some sort of order. 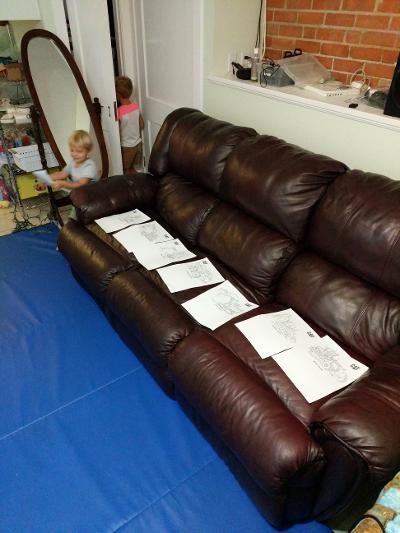 That is so Levon. August is doing better and he wanted pictures of hearts to color. As Jessie says, "He loves love."
I went out just a little while ago to take some pictures. And here we go. 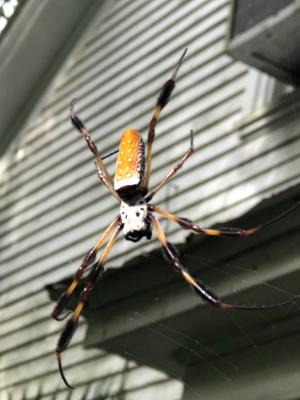 I don't think I've posted a picture of a banana spider all summer long.
This is the front of one. 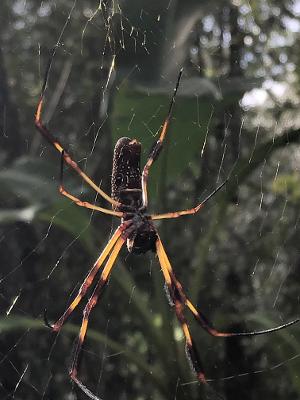 And here's the underside. You can get a small idea of what her web looks like. They are tremendously huge and they glow in the sun. The spider's real name is a golden orb weaver and yes, they are.
Speaking of glowing in the sun. 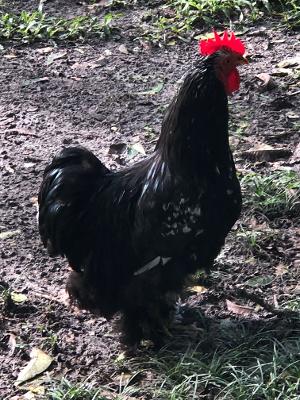 I do love the way a chicken's comb looks with the late afternoon sun shining through it. Little Fancy Pants. Can you see his feathery feet? It's wonder he doesn't step on those feathers like a man wearing a pair of too-long pants.
I noticed the other day that I could smell the tea olive and sure enough, it's starting to bloom. 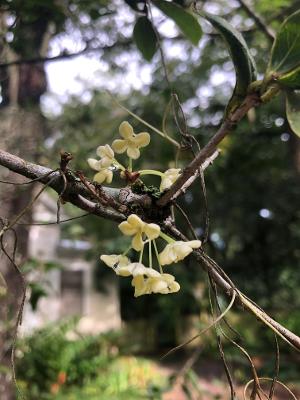 Each of those blossoms is smaller than the fingernail of a newborn babe. And yet, as I point out all the time, they are the most fragrant of blossoms. I always smell them before I see them. They smell of apricots and peaches and honey. They smell of the sweetness of the sweetest memories. They smell like what I think heaven would smell like if I believed in heaven.
I saw the first upwardly thrust stem of a hurricane lily but I did not take its picture. I will when it blooms. The rain has cooled things off and I can tell that the days are growing shorter.
I feel peaceful tonight and I hope that you do too. Tomorrow a new week will begin although in this time of Covid, there is very little to delineate one day from the next. Still, somehow Sunday has its own feel, one which I do not often enjoy but as I said, today has not been so bad.
I am grateful.
Love...Ms. Moon
Posted by Ms. Moon at 6:32 PM