Who Knew That Sleeping In A Bed Could Be So Sweet? 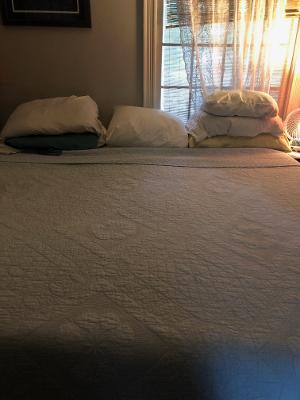 I do believe I am back in the bed for good now. Or at least until I break another rib which is hopefully NEVER. Last night I just made up my mind that it was time and I slept very well for nine hours. I discovered something that helped, though. I had been thinking for some reason that raising my head and shoulders would be better for my ribs but last night I thought about how in the chair I didn't use any pillows under my head and although the recliner does elevate the head a little bit in its furthest-back position, it's not much. So I took out all but one pillow and that did the trick.
And there you go.

Every day I feel better and better and today I cleaned out the hen house (and found seven lovely eggs), pruned the other spirea, and did a little weed-pulling in the garden, getting things ready for the fall plantings. None of this was very physically challenging but when I think back to the first week after I fell and remember how weak and lousy I felt, not even up to shelling beans as I sat in that chair and watched "The Office" I am rather amazed.
Oh! And I picked...BEANS! And peppers. 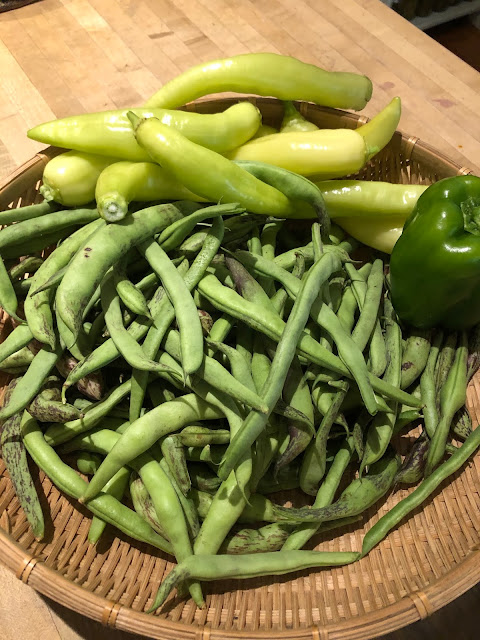 After the last picking of the green beans, I had thought that they were done but after I dumped the chicken hay in with the compost I saw that there were still some hanging from the almost dead-looking vines and so I picked all I could hold in my hands and later went back with my basket and picked more. Some of them are way over ripe but I just shell those and we eat the nice beans inside. I cooked the last ones I had in the refrigerator last night and mixed them with the lovely vinaigrette I've been making and added all of that to a nice salad with spinach and tomatoes and pine nuts. And now I have more! We are still not tired of them.
Jessie and the boys were going to come over this evening for a slumber party and to let Vergil get some work done in the attic at their house that he needs to do but we got a text from Jessie today that August had been throwing up.
WHAT?!
I mean, seriously. How can any of us catch anything with all of this isolation going on? 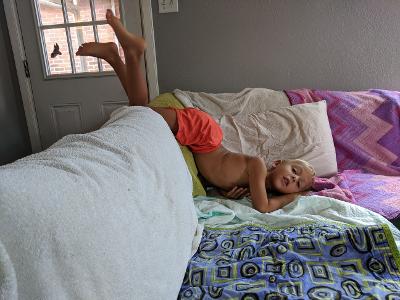 Such a bummer. Isn't he getting long? I'm sure he'll be fine. He was already bored when she took this picture. She said at one point this morning he swore he was SO hungry and she reluctantly let him have some cereal which resulted in her having to do a lot more laundry. Kids are so good at getting their puke everywhere, aren't they? Every mother in the world knows all about this. And some dads, too, I'm sure.
Mr. Moon has been pretty busy today. In fact, before I even got up he'd been to town and come back. He needed to do a little business with a tire store and while I was still drinking coffee he met with a guy who'd come over to check out the spaces for the doors that we're finally getting on the Garage Mahal.
This is pretty huge. For the past sixteen years my husband has been saying, "Well, I think I'm about ready to get some doors for the garage."
I would just nod and mumble something like, "Okay, dear," and get on with what I was doing but it's really going to happen.

We're about to have our ten millionth quiet evening at home. I have absolutely no problem with that at all. Supper, some TV, and then sleeping in a bed.
Sounds really good to me.
I better get on with the supper part of the evening. Might do a little crocheting. Who knows?