The Other Daily Show 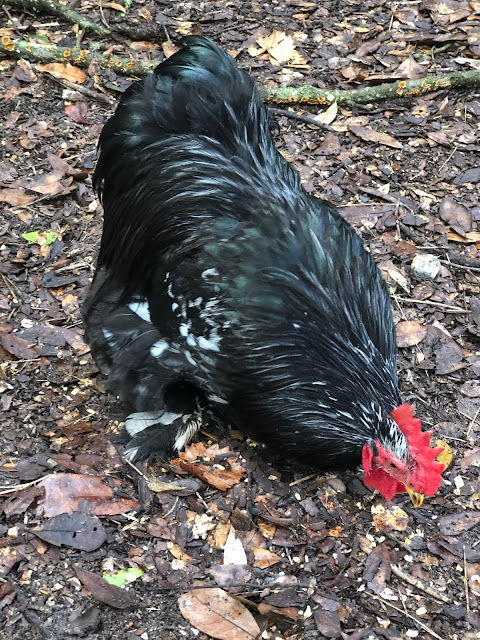 The number of feathers on Fancy Pants must range into the tens of thousands. I swear. That is the fluffiest chicken I've ever seen. So far he's holding his own in the flock. I have not seen Liberace do anything but ignore him although I have seen the little man accomplishing The Sex with a few hens. Turns out he does not require a stepladder. Anyway, I took that picture this morning before Jessie brought the boys out and I just thought y'all would be thrilled to see a picture of this sturdy little feather-duster of a rooster.
Sure.

Speaking of thrilled, I do believe August and Levon were quite happy to be here today. We gave them the puzzle and Levon was beyond excited. August...not so much.
"Is there another present?" he asked.
But soon both boys and their grandfather were on the floor in the hallway putting it all together. 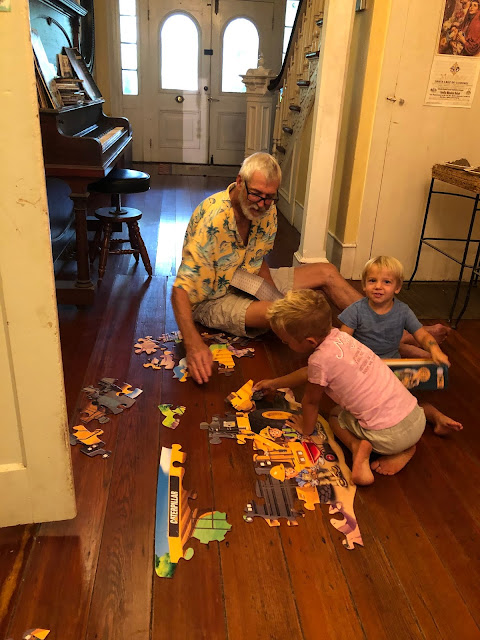 The boys are quite good at puzzles and I love it when they fit a piece where it should go and then hit it with the end of their fist and say, "Boom!" It's a cool puzzle. 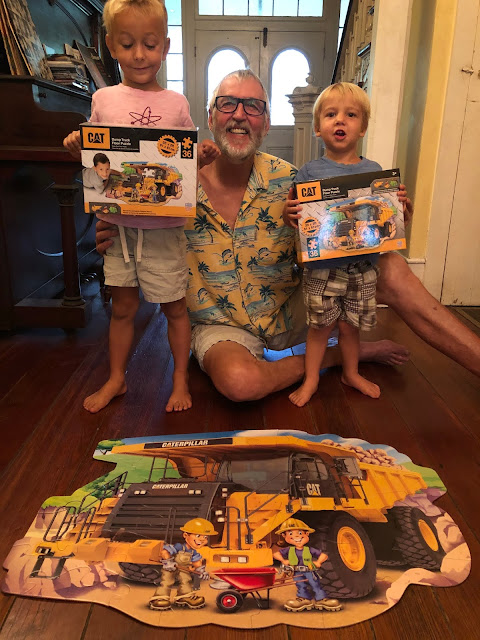 Levon was hoping that there would be a track hoe hidden in there somewhere but sadly, there was not. After that puzzle they were fired up and did another puzzle from my collection. From the one dollar price tag on it, I must have gotten it at the Bad Girl's Get Saved By Jesus Thrift Store and to my chagrin, turned out to be the exact same puzzle that I ordered for Ms. Magnolia June, paying full price on Amazon.
I'm an idiot. Of all the puzzles I could have bought her, I picked out one I already had. And of course I have no recollection at all of buying it and yet I must have because here it is. It was not magicked here, I can assure you.
After doing puzzles, we let them watch some TV because that's mainly why they love coming over. August sat on the chair with his Boppy and Levon sat on the couch and The Mighty Baby Bheem was selected as we all love it. Little short episodes that are silly and sweet and absurd and all set in some part of rural India. It's a delight. 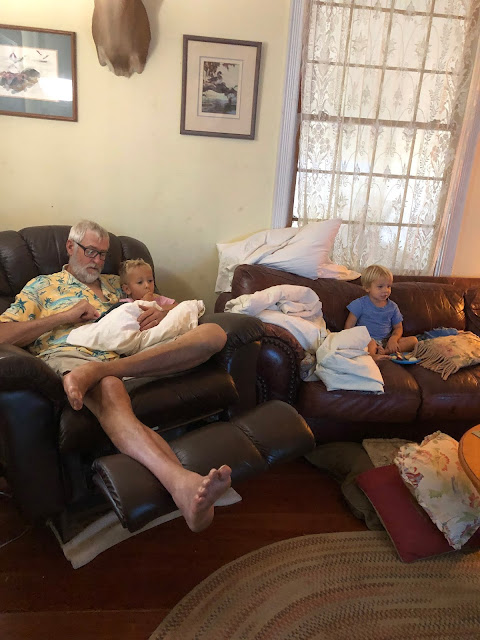 I sat on the end of the couch to the left of Levon and did some embroidery and at one point I said, "Levon, do you want to sit next to me and cuddle?"
He looked at me in true wonderment and asked, "Why?"
Ha! Good question. He does allow me to kiss him quite graciously. August is not so accepting of my love and that's okay. I give him his space. Obviously though, he does love sitting in that chair with Boppy. When his mama came back he told her, "When I was sitting with Boppy in his chair, I got hot as a toaster oven!"
He was proud of that.
After a few episodes of Baby Bheem I got up and went and made lunch. When I was incapacitated from my ribs, I asked Mr. Moon to get some Kraft Macaroni and Cheese. I think I may have mentioned this. He bought two boxes but not the regular kind. The Deluxe kind! The kind where you boil the macaroni and then squeeze the "four cheese" blend of orange cheezy paste into the cooked noodles, doing away with the need to add milk and butter. August watched me do that and he was so excited. "Yum!" he said. He was right, too. It is yum. And salty as shit.
I gave everyone some of the gourmet deluxe macaroni and a little bit of salad and a few nice green beans and cut-up cucumbers. 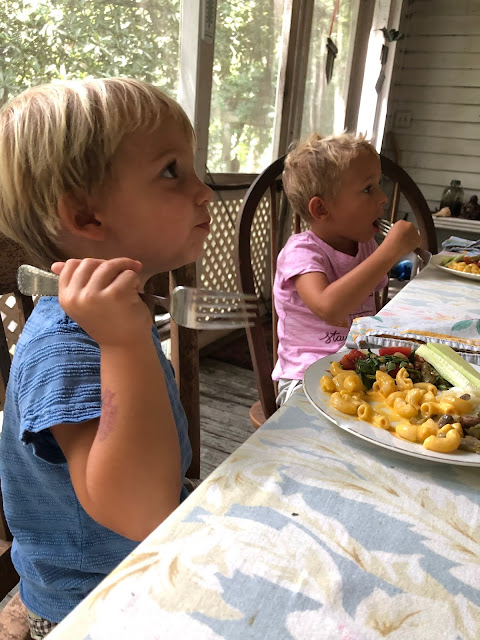 The boys plowed through the mac and cheese, ate a few green beans reluctantly, and that was lunch. Hey! I did my job.
Then it was time to play with toys. Out came the Lincoln logs and the little houses where the rabbits and, either mice or bears, we're not sure, live. Somehow we started on a search for more Lincoln logs which led to going through the entire toy basket which was a lot of fun. We organized things and found surprises, the favorite being a duck flashlight that goes on a keychain that not only lights up but also quacks. We also found an old Barbie whose arms had been amputated.
Don't ask me.
Mr. Moon referred to her as "your baby" to Levon and he was quick to correct his grandfather. "She's a lady," he said.
He's right.
Jessie came back while we were sorting and organizing toys and we were all like, "What are you doing here?"
She'd had a good few hours of shopping, even managing to go to TJ Maxx and getting herself a little bit of new clothing including a very cute bathing suit. So Mama was happy.
Soon it was time for them to leave which went smoothly enough as I promised them treaties when they got buckled in. This is our ritual. August had even pulled the stepladder out, put it by the kitchen hutch and opened up the cabinet where the treats are stored to pick what he wanted which of course was M&M's. When he got in his seat and was all secured I asked him how many he thought he should have.
"Five," he said.
"I'll give you ten," I said. I counted them out and he accepted them and said, "Levon gets ten too."
"I know," I told him. "He will." And he did.
I also ate a few toes.
And so that was our visit. After they left I went out to water the porch plants and I happened to glance over by the little swing porch and guess what? 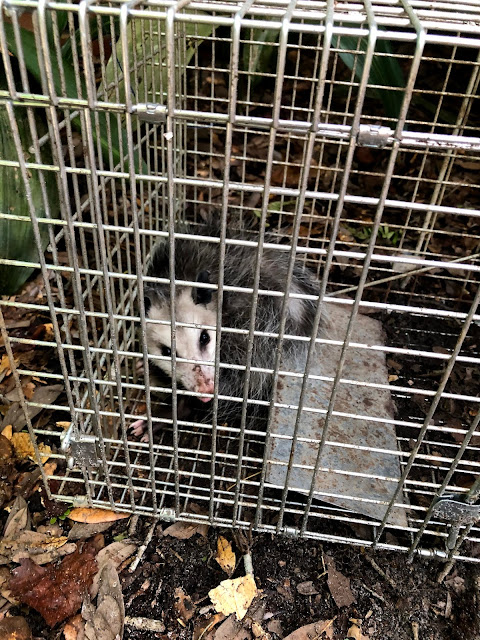 Mr. Moon finally caught a possum. It was a young'un and I'm thinking there's probably an entire extended family under the house. He was taken down to Lloyd Creek Road and let go. I hope he survives. It's not ideal to try and relocate wildlife but I suppose it's better than shooting them.
I decided to trim the palms out front but Mr. Moon said, "Let me do it with my little power saw." I bitched a little saying that I could do it myself with the loppers but he insisted that it would be so much easier. And damn if he wasn't right. In about ten minutes he'd trimmed the cabbage palms which were blocking access to the porch and the Canary Island date palms which we refer to as the goddam fucking killer palms and why did I plant them? palms. 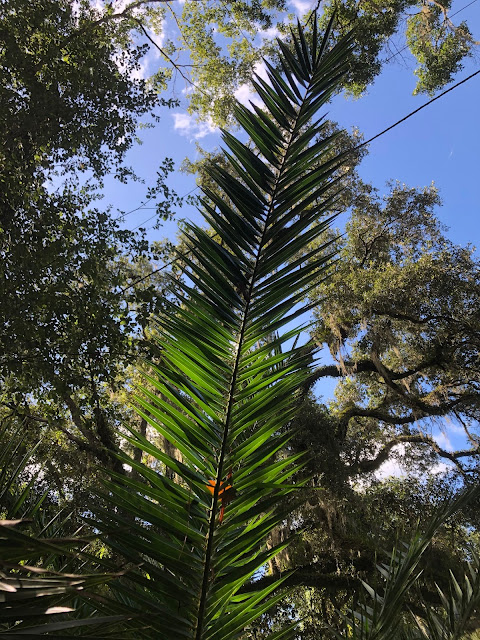 Every one of those spines can pierce your skin like a surgical instrument. I always swear I'm going to get rid of them and today Mr. Moon put their removal on his to-do list.
I loaded up all the trimmings and also trimmed back one of the spireas that I stupidly planted there. There's another one on the other side of the gate that I'll get to tomorrow if possible. I hauled everything to the burn pile and I am pleased to report that I did not spike myself once although my husband did. Which is why he is now totally onboard for pulling them out.
Yesterday was five weeks since I broke my ribs and unless I put pressure on them, they do not bother me at all. Still, lying on the bed puts pressure on them and I'm starting to wonder if I'll ever sleep in the bed again. Every night I give it a try either before or after my shower. I lay down and read for awhile to see if I'm comfortable, if it feels okay. And every night, no matter what position I'm in, I soon develop what feels like a stitch in my side and end up sleeping in the chair.
Overall, though, it seems rather miraculous to me that in five weeks I've gone from what I really felt as agonizing pain to being...pretty darn okay. Occasionally I can still feel what appears to be a bit of a cracking sensation. Not like a cracking-in-half sensation, just a not-quite-all-there-yet cracking feeling. But sometimes I throw caution to the wind and grab Levon and hoist him up to kiss him and that doesn't seem to bother me at all.
And that's more than you wanted or needed to know about Lloyd tonight. I've been thinking about Jacob Blake all day long. I've also been thinking about that little piece of shit who killed two protesters and wounded a third and how he managed to just walk on out of the situation, a seventeen year old kid with an automatic rifle in his arms, even after he announced, "I just killed two people!" I try not to be a violent person in thought or deed but I swear- sometimes it's hard not to control my reactions. His parents have a lot to answer for.
Is the RNC over yet? I have no idea. I just want the whole damn nightmare of the past four years to be over. I often have intensely disturbing dreams but my mind could never in a million years have come up with the one we're living in.
Hang in and hope. That's all we can do.
Love...Ms. Moon
Posted by Ms. Moon at 6:55 PM