Why Mop? Why Do Anything? 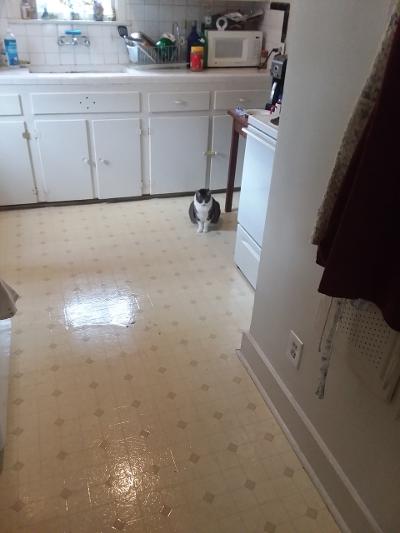 When I got up at the crack of nine-something this morning I'd already gotten that picture from May on our all-included texting group. She'd written, "She's mad I mopped." That's her cat Lupita.

This motivated me to think about mopping our kitchen but since it was raining and will be for some time most likely, I decided that mopping would be a waste of time because we'd just track in mud and then there we'd be again.

I can talk myself out of anything.
Anything I don't want to do, that is.

My motivation is shot. The only things I'm motivated to do these days are laundry, cooking, and watching The Office. Maybe doing a little needlework. Except for not being able to get comfortable lying down on a bed, I'm barely handicapped at all by my ribs anymore. That's the honest truth. They ache some when I wake up and they remind me they're there if I make the wrong move but otherwise, they're hardly bothering me at all. I have been thinking about clearing the garden to get it ready for fall but, oh golly, did I mention it's raining?

I was grateful to get a text from Lily asking if I could make her some new potholders. A project! I was so excited I got online and ordered some cotton yarn in many colors to crochet with. While I was there I ordered a puzzle for August and Levon and one for Magnolia.
I felt like I'd done a whole day's work.
Which in my case today mostly was. My whole day's work.

Doesn't look like either storm is going to cause us much trouble. I'm glad of that. I hope they don't cause anyone any trouble but that's hardly possible. And of course we never know.
From the National Hurricane Center's website I grabbed this image of Tropical Storm Laura's supposed path. It's forecast to turn into a hurricane when it gets into the gulf but it doesn't look like it's going to one of those horror shows of a hurricane. Still, even a tropical storm can cause great damage with its winds and rains. 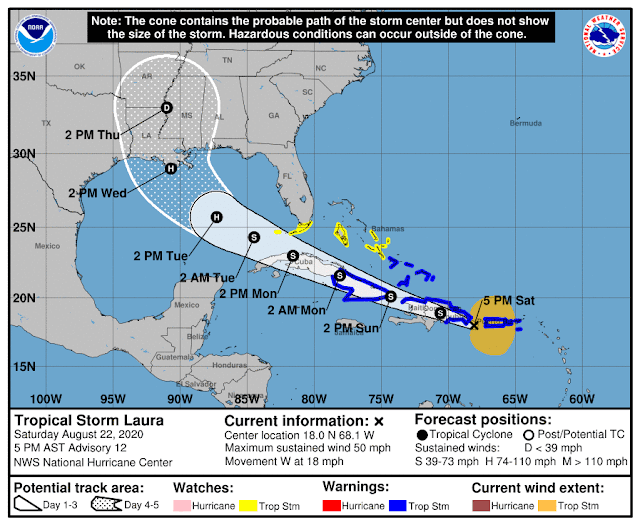 Poor Cuba. They get 'em all. And it would appear that Louisiana, Mississippi, and Alabama are going to suffer. Just what they need, right?
As to now-named Tropical Storm Marco, this is what it looks like. 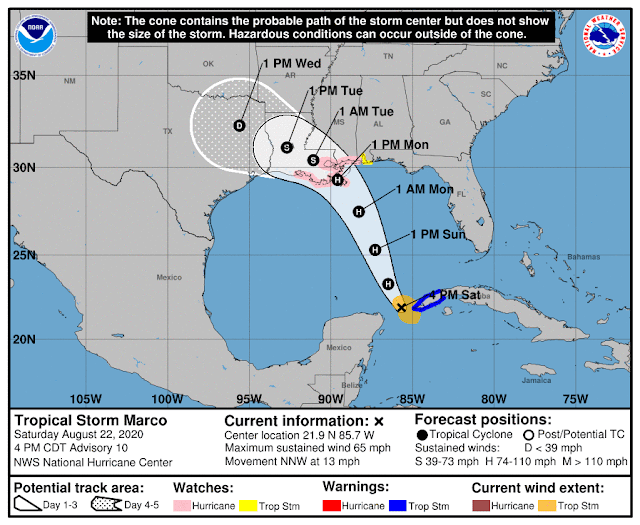 And I now see that the forecast on that has changed making it look more dangerous than it did before and guess what? It's going to land in the same places as Laura does.

It's unheard of for two hurricanes to be in the gulf at the same time. Somehow though, this does not surprise me. It's still 2020, right?

Obviously, I have nothing really to say. Life in Lloyd is being lived. Cat life, bird life, chicken life, squirrel life, possum life, all-the-four-legged-critters life, plant life, insect life, spider life, human life. We mostly try to stay out of each others' ways although we do interact sometimes. Have you ever bounced off a golden orb weaver's web?

It's cool tonight, relatively, only 76 degrees out on the porch. I'll try again tonight to see if I can sleep in the bed. One of these days it is going to happen.

Meanwhile, I'm going to go cook some green beans and potatoes. We're almost to the end of the fresh ones. It's been a great run.