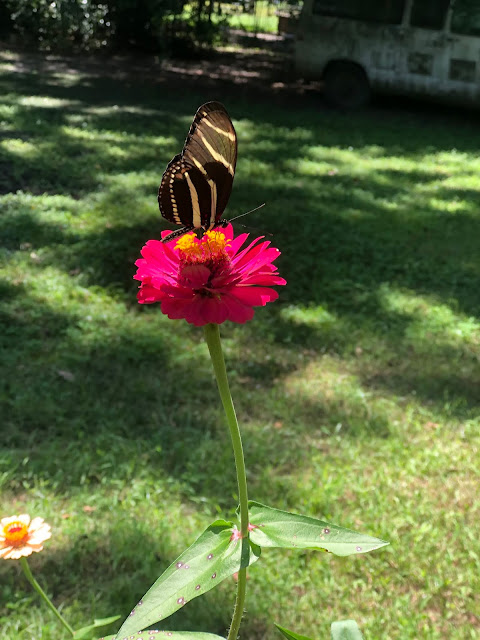 Well, as these things go, today was a bit rough. I wasn't in a great deal of pain, I just didn't have much energy. I keep thinking about the fact that I am going to have to go to town soon to grocery shop and there is really no reason why I shouldn't. Mr. Moon's been doing a great job and I've been using up what we have in the freezers and garden but there are certain things that I need in the pantry and refrigerator and it's just too hard to explain to him which type of mozzarella I buy and where the Shake'n'Bake is and which sort of flour and, and, and...
Plus- the longer I stay hunkered and huddled in Lloyd, the harder it's going to be to leave and I really, really do not want to develop a case of full-blown agoraphobia and it's already way too easy for me to just stay right here tied to my little piece of property, my house, my chickens, my cats, my chair (his chair), my three dresses and my garden.
Physically, I can drive to town and shop. That's really not the issue. Yeah, it'll wear me out but who doesn't it wear out to shop these days? Publix and Costco, baby. I can do it.
Maybe tomorrow.
We shall see.
Meanwhile, I just did the little things today. I made about the eighth batch of pandemic pimento cheese for my husband. Did a load of clothes. Swept the kitchen which yielded about a half pound of black, gritty Lloyd dirt. And then because I can't and won't waste any of those green beans, I went out and picked another basketful. There are fewer now by far and if I get another whole basketful I'll be surprised. Last night I made a green bean salad with a dijon and shallot and garlic vinaigrette which is our favorite way to eat them and it was so good that I am loath to waste a fresh bean. The zebra-winged butterflies are drunk on zinnia pollen right now (or is it nectar) and at one point I saw four feasting or sipping on a patch of the flowers that are still blooming nicely. 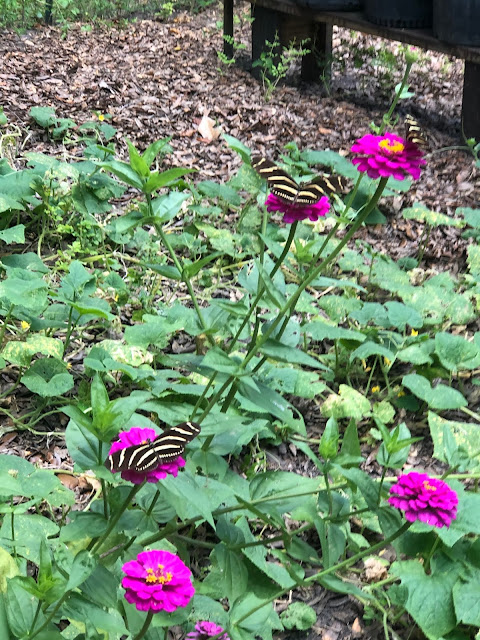 There are only three in this picture and one of them is hard to see but trust me- there were four.
Here's what I picked today. 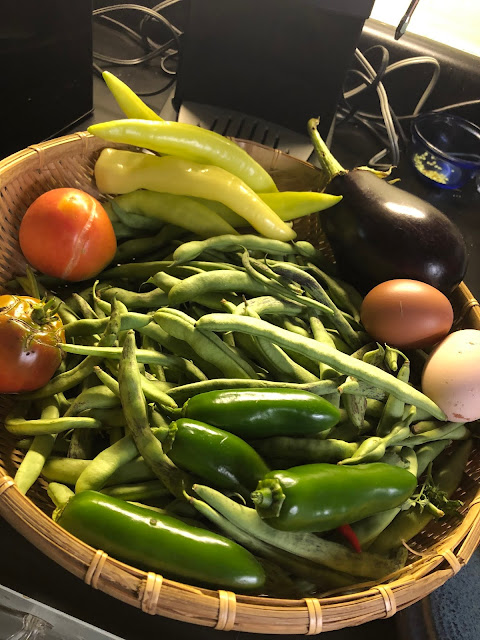 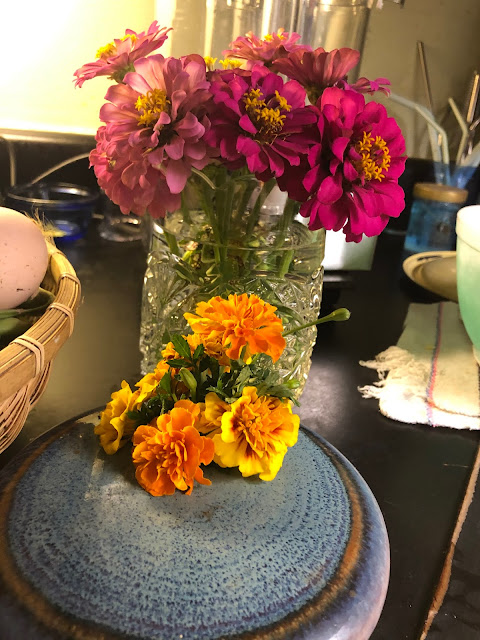 Well, I didn't pick the eggs. It was more like I plucked them.
Then I sat my old-lady ass on the couch and snapped those beans. The garden has been such a joy this summer.
So of course while I was snapping, I was watching "The Office" and I'm now into the season where Kathy Bates plays a woman named Jo Bennet who is the head of the company that buys out Dunder Mifflin and she lives in Tallahassee. Tallahassee is a place name that authors and screenwriters and TV writers seem to love. It just sounds so...ridiculous? I don't know. But it's used far more than you'd think. And generally, it's the butt of a sort of joke about the south and our...ridiculousness?... and although I agree on some levels it still hurts my heart a little bit. I never, ever planned on living in Tallahassee (or even as nearby as I do now) and yet, I moved here in 1974 and here I am, rooted as deeply as one of my oak trees. Four kids and five grandkids will do that to you.
But I love the way Ms. Bates plays a Tallahassee business woman. She's such an amazing actor. She doesn't play Jo as a cliche but gives her a great deal of depth. And her accent isn't completely terrible.
Oh Lord. This is now my life- reviewing the performance of an actor on a ten-year old TV show.
So that's about it. I swear I am going to try to sleep in the bed tomorrow night. Last night, as an experiment, I laid for awhile on first my injured side and then my un-injured side and both were sort of okay. And this too, is my life right now- talking about my sleep positions.
Yeah. That's enough of THAT.
Oh! Here's a picture that Jessie sent today of her boys on a hike. 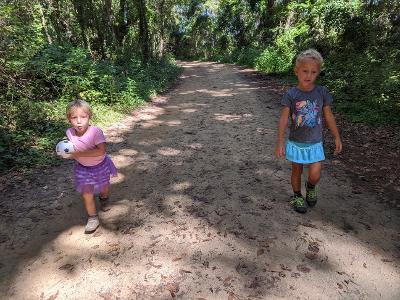 They are making good use of some of Maggie's hand-me-downs. I just love how they pick out exactly what they want to wear without any fear of criticism about wearing "girl" clothes. And Jessie said that this morning Vergil told the boys that they looked very nice today. What a good daddy he is!
Why should girls get all the fun and fancies?
No reason at all.
Love...Ms. Moon
Posted by Ms. Moon at 6:28 PM