So, well, hey, here we are.
I waited approximately three-quarters of the day for the new refrigerator. While I waited I did something I've needed to do for a long time which was to scrub my kitchen island. It looks like this. 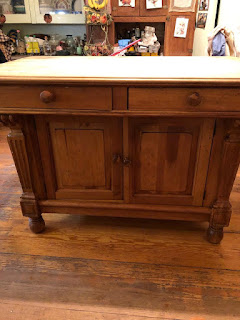 It came with the house and it takes up about half the kitchen but I use it for storage and I keep stuff on it and pile stuff on it and I roll dough out on it, etc.
I had made up some of Birdie's special cleaning concoction of half dishwashing liquid and half cleaning vinegar and I sprayed and scrubbed and sprayed and scrubbed.
A toothbrush was involved.
I point this out because no one in the world would ever notice that I did it and I feel the need for credit if not praise.

I took stuff out of the freezer and put it all in a ice chest while I waited and also some of the food in the refrigerator and some of it I just put on counters. It was a mess.
But then, the men in the truck came and after a great deal of wrangling and setting-up of doors and the water line and I have no idea what-all, they took their leave and now, I have this in my kitchen. 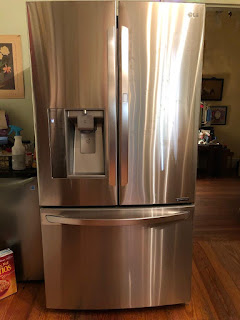 Cue Thus Spoke Zarathustra
Isn't that ridiculous?
I keep thinking about the woman who moved into this house when it was first built and how she would not even have the slightest idea what in hell that gleaming piece of metal-encased box is.
I was a bit intimidated as well. 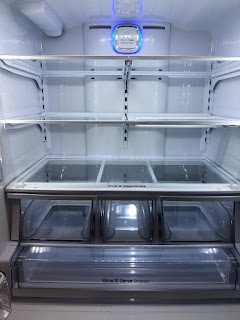 Oh, the white virginal interior holding nothing but air and dreams and potential!
Where to put everything? How to arrange it all? It was almost too much responsibility.
But I did it. 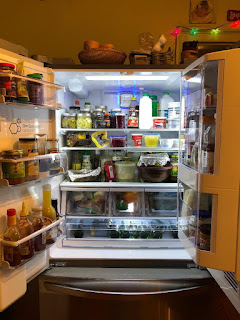 Can you see how many condiments and pickles I have? My god. As I told Lily and Jessie today, my refrigerator is like the United Nations of condiments. I've got everything from Tahini to curry sauces  to Mojo to salsas. I have four different types of hot sauce alone. Tabasco, Crystal, Mexicana, and Sriracha.

So. There you go. There was nothing of any real interest under the old refrigerator, sadly. Just a crapload of dust, mostly. Hank and Rachel happened to be here when the old one was moved out and Rachel did most of that particular cleaning chore which I really appreciate.

Well, one thing my new refrigerator will not do is cook supper so I better get in there and cook it myself. Going to get really chilly tonight and down to freezing tomorrow night and that means that Mr. Moon and I are going to have to bring in at least some of the porch plants and you know how much I love that yearly event.
Why do I feel as if I must make my porch a jungle of tropical plants which cannot withstand cold?
I do not know.
Perhaps I am hoping to lure dinosaurs to my house if they should ever decide to come out from their hiding places. I know they still exist.
Until that happens, I have my chickens.

And a brand new stainless steel refrigerator! Let's see how long it takes before shit starts breaking on it.
I'm such an optimist, aren't I?