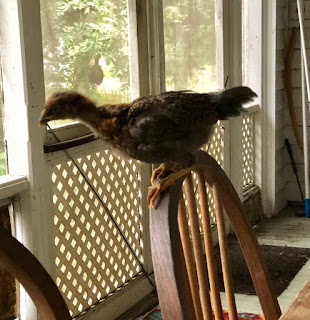 Today was slow and gray and Sunday. I stayed busy for most of it, primarily with making a soup out of the turkey carcass which I started boiling right after breakfast. I messed with it all day long, getting all of the meat off the skeleton, chopping garlic and onions and celery and carrots and collards and peppers. I added some of the beautiful Mexican red Recado paste I love so it is a lovely color, almost as if it had saffron in it. I will add rice when it is closer to supper time and that will be our meal.

As I made the soup I cleared things out of the refrigerator because the new one is being delivered tomorrow. I was not exactly ruthless but I did get rid of a few things which I will never actually use in this lifetime and combined a few things, too. Mr. Moon cleaned off the top of the refrigerator which means he took everything down from it and left it all on counters for me to figure out what to do with.
Anyone need a coozie?
Or a bottle of fingernail polish remover?
Or a tube of Super Glue which is no longer viable because it's solidified into Super Glue Cement?
Dear god.
I cleaned off the outside of the refrigerator, removing pictures and love notes, cards of the business and romantic and funny sorts. There are a few things that are going to go on the new refrigerator as soon as it's in place because I love them and I do actually look at them daily and am glad, every time.
Perhaps the most cherished photo is not even one of a grandchild but is this one. 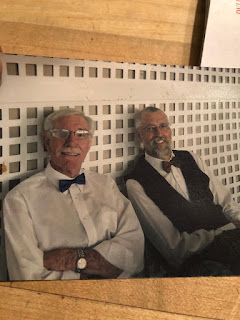 That's my handsome husband sitting with a man I truly loved with all of my heart and I'm not ashamed to say that. My husband loved him too. Every one did.
Colin Rolfe.
If you're newish here, you probably have no idea that I used to be quite active in a community theater in Monticello, Florida, and that picture is from an event held at the old Opera House where we rehearsed and performed. Colin and Glen were bartending for some event. Volunteer work, but a joy because Colin was there. I wrote a post seven years ago about him and you can find it HERE.
I just reread it and am now crying a little bit and to tell you the truth, every time I look at that picture tears well up a little.
So. Colin and Mr. Moon will go back up on the new refrigerator.
And probably this as well. 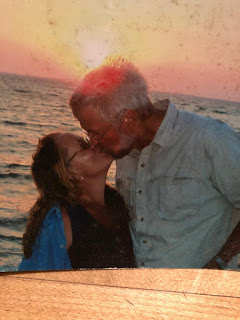 My husband and I kissing at sunset on Dog Island. I have no idea when that picture was taken but it makes me happy to see it. The dress I was wearing is the same one I've worn to each of my grandchildren's births. It is tattered now and becoming quite beyond repair but it is precious to me and so is that picture.

On a more prosaic note, I cleaned out the hen house and put fresh straw in the nests. I also filled up the waterers with fresh, clean water. Chicken care honestly takes very little time. I suppose if I was more obsessive about cleanliness it would take more time but my chickens never seem to get worms or diseases or infections so I guess the level of hygiene is acceptable.
Knock wood.

I am noticing that the babies are venturing farther and farther from their mother these days but not far enough yet for her to not be able to hear their still-constant twittering. They are so dang cute at night, huddled up next to her in the nesting box where they roost as she makes her come-to-me-now cluck. They are no longer small enough to hide beneath her wings but they still try. Last night I was shining the flashlight on them, trying to get a count and had my face right up next to Ringo who was sitting at the front of the nest. He was a bit agitated because I was so close and he finally reached up and gave me a little peck beside my mouth. It didn't hurt and I know he was simply telling me that I was way up in his space and he did not appreciate it. I was in the wrong and I know it and I apologized to him. Whether he accepted it or not, I do not know but I did back up and he settled down.

I just went into the kitchen to punch down the bread dough and to add the rice to the soup and I swear, that blindingly white bare refrigerator is freaking me out. 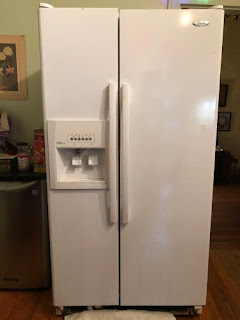 Mr. Moon said that he feels the same way.

I wonder what we'll find tomorrow when they move this one out of its space. Dead roaches are a given, probably desiccated lizards too. Marbles? Vitamins? The hair of dogs long in the grave? The long-lost hopes and dreams of a frustrated novelist?
One never knows but one thing is for sure- I'll apologize for what IS there as if a good housewife would somehow always keep the area underneath her refrigerator dust and detritus-free.
Key words being "good housewife" and I certainly do not claim to be one of those.