You know this did not happen.

On to Lowe's. There we decided that yes, we still liked that model the best.
On to Home Depot where I almost lost my shit and decided that perhaps I may be somewhere on the Autism scale because I CAN'T TAKE THAT SORT OF IMPUT! Lowe's and Costco had not been so bad but Home Depot was crazy.

We still liked the same refrigerator.

One more place to stop. A local appliance store that's been in business for about a hundred years. We checked out what they had and were still thinking we wanted the original make and model we'd seen at Costco but then the sales lady sort of pushed us towards another model of the same make. It doesn't have the door you can see through and it doesn't have internet access (I am not kidding you) but it does have two separate ways to access the ice maker and THAT IS IMPORTANT!
So.
We got that one.
Which is fine. I really don't need to see through the door although the feature where you knock on the glass twice to make the light come on is unbelievably cool, and I really don't want my refrigerator to have internet access.

So. That was that. And on Monday they will deliver this brand new stainless steel-looking fancy pants thing and moving the old one out.

You know, sometimes you just don't really look at something that you use a hundred times a day. Or you may look at it but you don't really see it. Suddenly, I am seeing my refrigerator and it is a pure-T mess! 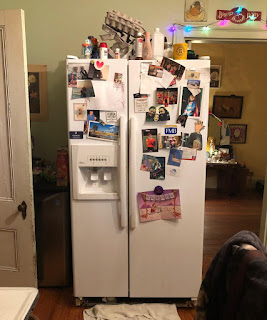 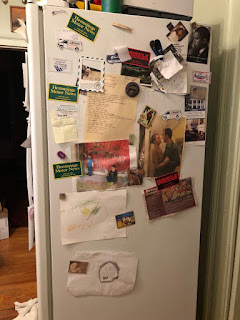 It is a great white megalith museum of our family, a very messy and disorganized and flapping megalith museum of pictures taken and pictures drawn, of cards and sweet notes, of magnets from fancy stores and magnets from Hemmings Motor News. Whatever that is.
I think I am going to remove everything from that refrigerator and put all of it in a box and stash the box somewhere to be discovered and gone through like a time capsule by some unfortunate child of mine in the future.
I wish I had the courage to just toss it all because haven't I been looking at these things long enough to have gotten all of the spiritual and mental juice out of them?
And of course we haven't even discussed the TOP of the refrigerator which I have told Mr. Moon is his responsibility because to be honest, most of the stuff up there is his.

So. My life is about to change and I hope for the better. You can't buy love and you can't buy happiness but you sure can buy a new refrigerator that doesn't have a crumbling interior and shelves held together with super glue and rubber bands.

After we purchased the new kitchen megalith we drove over to Jessie and Vergil's house where we picked up this kid. 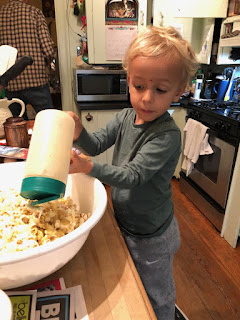 That's him sprinkling the nutritional yeast on the popcorn I made for him and his Boppy. Boppy's got a basketball game on and August doesn't really like basketball but he's having a good time hanging out in the Glen Den and playing with stuff.
I've got his bed all made up and he's placed his animal friends on it to be ready for sleep.
Pizza dough is rising.

And in very, very exciting chicken news, Dearie has her babies with her in the hen house where all of the chickens roost instead of in the little coop in the big coop where they have been sleeping since birth. There was quite a bit of fussing and fretting to achieve this, but Dearie did it. And I have to report something very sad which is that last night one of the littles was snatched, I guess, because she is not here. When we got home from Lily's, some of the babies were still outside and I have no idea what was going on there. Mr. Moon got all of them that were outside into bed with Dearie and the rest of the chicks and this morning that turned out to be nine instead of ten.
Four brown chicks, five yellow.
I am sad but also very grateful that this is the first one we've lost.

August needs and wants some attention. Time to go.