So. Just before I started writing my post last night a guy walked into a Tallahassee hot yoga class in a building about a quarter mile from where I lived when Lily was born and shot six people and then himself. Two of the victims have died.
I didn't hear about it until after I'd published my post and at that point I was too disheartened to say anything about it. It made the national news which I am a bit surprised about. I mean- only two victims dead. That hardly registers on the ol' tragic-o-meter these days.

I didn't know any of the victims but seems like a lot of people that I do know knew them.

Could there be a safer place than a hot yoga class on a late Friday afternoon?

Andrew Gillum's been campaigning with Barack Obama and he had to come home because he is the mayor of Tallahassee. He's back out on the trail again today and I don't blame him. Somehow I feel like if he doesn't win then I'm really going to give up on humanity entirely. Or at least Americans.

Jessie and the boys are here as Vergil's in the woods trying to get a deer to restock their freezer. He hunts for one reason and one reason only and that's to get good meat for his family. I never would have foreseen him doing this. He was raised vegetarian and ate mostly what came out of his mama's garden or from her goats or apple orchard. I think that did influence him though to know that whatever it is you eat, the closer to the source the better and your own harvest is always best in all regards, whether of fruit or vegetables or meat or fish. Anyway, I'm making a corn and vegetable chowder for our supper and have rolls rising which may have way too many healthful grainy ingredients in them. They remind me of the rolls that I made once for Thanksgiving back when I was a true hippie-in-training and my grandmother, sprung from the nursing home for the dinner gnawed away at one of the puck-like whole-grain gobs of baked stuff and finally said, "What is this?"
"It's a roll, Mother," said my mother.
"Must I eat it?" asked my granny.

I hope they're not that bad. 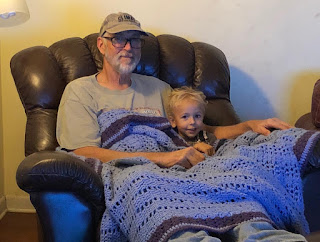 August in his happy place.
Before they sat down to watch the TV, they went to the dump with an entire truck-load of stuff to get rid of. That made August so happy. He helped his Boppy unload the stuff and Boppy paid him with the quarters that were in the truck.
Win-win for August.

He checked to see if the lightbulb in the range hood was still nice and clean.
It is.
Jessie told me that when she asked him if he wanted to go to Mer's this afternoon he said, "Yes. Can you leave me there?"

Thoughts and prayers, y'all.
A friend of mine on Facebook reported that a friend of his said that the shooting made him feel "ragey and votey."
Yeah. I think that's about the correct response and I couldn't have possibly said it better myself.
Although I feel mighty sad, too.

Take care of each other. It's a crazy world out there. And no, you don't have to eat the rolls if they're too hard to chew. That's the rule.