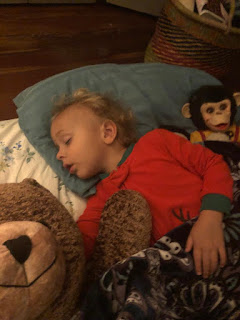 After a bath and reading five of our favorite books last night, August laid down on his little bed beside our bed with his animal friends tucked in beside him. I laid down beside him too, as he wasn't quite ready for me to leave and we talked about things and he told me some of his long stories and I was amazed at how much a three-year old child had to say, especially one who was half asleep.
Finally I told him that I needed to go take my shower so I could get in my bed and he let me go and was asleep within minutes and this morning when he woke up he stood up in his bed, his pajamas entirely off for some reason, and began his story-telling again. He crawled in bed with me and it was as if the entire night had merely been a breath he'd taken in his musings and instructions.
Boppy, who had already gotten up, came in and took the boy away to dress and to let me get a little more sleep but I was already awake at that point, infected and injected with August's morning enthusiasm.

There were, of course, pancakes. And bacon. 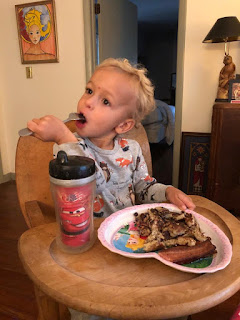 I am so grateful that I still have little ones to sit in the old high chair and eat from the princess plate. He stabbed and ate those pancakes in about five minutes despite his grandfather and I pleading with him to slow down and chew his food. He did not heed our warnings one bit.
"I is so hungry!" he said when I set his plate in front of him.
I do believe he was.

And now here's the part that might well freak some of you out. It freaks me out a little bit. Maybe more than a little bit but it's a reality here in Lloyd and what happened was that while we were eating breakfast, Jason called to tell Boppy that Owen had shot a buck. He's been hunting for quite some time but this was his first, uh, kill? I guess that's what we must call it. And he did wonderfully well, dropping the deer right where he stood so that death was instantaneous and painless. Owen talked to his Boppy and he was proud. I could tell. And so after breakfast Mr. Moon and August took the truck over to Lily and Jason's house and loaded the deer in the truck and brought it back here to clean.
This is a process that Owen has participated in before. If you are old enough to shoot a deer, you are old enough to see blood and guts and to help turn the animal into meat.
And so it was.
I went out and did something I don't ever do which was to say, "Show me your deer," and they did.
I told Owen that I was very proud of him and he said, "But you wish I didn't hunt, don't you?"
"Yes," I said honestly.
"You're terrified, aren't you?" he asked me.
"Yes," I said. And then, "No. I'm not."
And I'm not because if there is a right way to do this, that is what's being done.
Owen has been taught slowly and patiently and he will never be in a deer stand alone until he is much older.
This is all something that I do not really understand, even after having been married to a hunter for thirty-four years but what I do understand is that it's not necessary for me to understand.
And Owen will eat what he killed. And he will appreciate that. And he will see his family eat what he killed and I think he will be very proud.

Like I said, this is difficult to talk about. I never honestly considered this sort of situation when I married my husband. Perhaps I thought that he would become more domesticated over the years and lose that desire to get up in the early, early morning darkness to go walk through the woods and sit and watch as the day begins and the creatures stir and to sometimes shoot one of them and bring it home for me to cook.
Well, if I did think that, I was wrong.
And he has become very proud to see his sons-in-law become good hunters who provide clean meat for their families.
And now, his grandson.
I wonder if August will want to hunt. He is fascinated at this point by the deer and it doesn't bother him in the least that the deer is dead.
Gibson flat-out said that he doesn't want to see blood and guts. No way. And certainly, no one is going to ask him to hunt if he doesn't want to.

And while Owen and Jason and Boppy were doing whatever it is that they do out there in the garage, Jessie got here and we got to see Levon. Gibson asked if he could hold him.
"Sure," I said, and told him to sit down and then plopped the little guy on his lap. 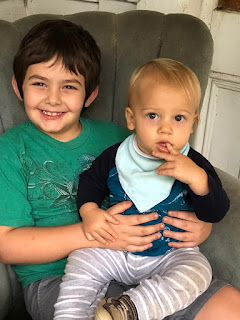 Gibson is sort of blowing my mind recently. Not only is he still the sweetest child in the world, he's really starting to spell and read. He's constantly asking how to spell words or else he spells them for me on his own. He asked me how to spell "Levon" and I said, "You tell me."
And he figured it out without a hitch.
He wanted me to lay down on my bed with him to read Professor Wormbog In Search Of The Zipperump-A-Zoo, and I did and he read parts of it to me. I'm not surprised that he's learning to read- I mean, he is in the first grade, but what does surprise me is how he is constantly thinking about how words are spelled.
Each of my grandchildren is so very, very different than all of the others and each of them astonish me in different ways. You'd think I'd be a little more nonplussed about watching children go through their growth and developmental stages at this point in my life but honestly, I'm not. In a way it's like watching my own children grow up again, each one of them so different in the ways they learned and related to others, their own unique strengths and gifts, except that time seems to pass so quickly now that it's as if I am watching it all over again in fast-motion.
Ah, life.
And speaking of which, Levon is walking more and more every day. He does the drunken sailor roll across the floor, his little legs spread far apart as he finds the balance it takes to be a biped. When you ask him a question, he nods his head, and he waves at every car which passes his yard when he's outside. He claps his hands with great enthusiasm and giggles when he is tickled. He's a dancin' fool when the music comes on. When I pretend to chew on his toes he offers his foot up over and over for me to continue to nibble. He nurses standing up, looking around, upside down.
My baby-baby is growing up too.

They all are.
And if I married a man who has influenced our grandson to be a hunter, well, that is what I have done. When it was almost time for Owen and Jason and Gibson to leave, I heated up some pizza for the boy. We chatted in the kitchen as he ate and it felt good to me to offer him food after the morning he'd had. He is really, really growing up. And he still loves his Mer. I know he does. And he knows I love him. He will always be my first grandchild. There is no changing that. I look at him, almost as tall as I am, parts of his hair dyed green, wearing silver hoops in his ears, watching out for and protecting his sister, and now, bringing meat to the family table and I wonder at the way things have turned out. I certainly never could have predicted any of this.
As I have said before, I never even dared to dream of a future where there was goodness and happiness. And if I had not married Owen's grandfather, there simply would not have been.
I am pretty certain of that.

One last picture. I found it from Thursday and had taken it at Thanksgiving but had forgotten it in the celebration and exhaustion of it all. 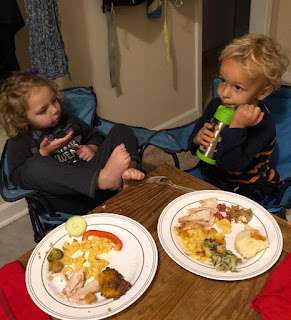 Maggie and August, eating their Thanksgiving dinner at the children's table, Maggie relaxing with her feet up on the table, obviously making a point to August in their conversation.
He does not seem to be convinced.