It's Going To Freeze In North Florida Tonight 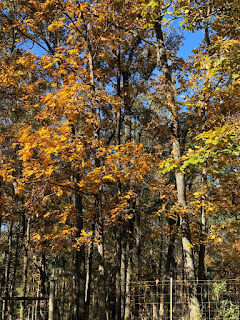 Got a beautiful ramble in this morning and it was cold! At least for this old Florida lady. The sky was so blue, some of the trees actually have fall color and I saw woodpeckers and squirrels and heard different birds calling and singing from the pine woods beside the road. I was actually glad to be out.

The houses on White House Road where I walk have started their Christmas decorating. Here's my favorite so far. 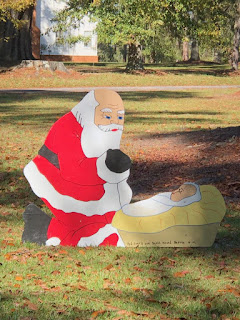 If you can't read what that says at the bottom of the sweet baby Jesus' manger it is, "And everyone shall kneel before Him."
Now that's what I call keeping the Christ in Christmas, y'all!

The yard where the Halloween decorations were over the top have replaced the pirate ship and dragons with all sorts of lights and seals balancing balls on their noses and what was Boot Hill with gravestones and skeletons on it just a few weeks ago is now the Nativity with a little stable, I guess, and life-sized figures of the Holy Three along with various wise men although one of them has blown over unless it was a camel. I couldn't tell. Nor could I get a good shot of it.
I'll keep trying.

I had to go to town for groceries (one cannot live on condiments alone) and saw my beautiful friend Brenda at the Costco. She was wearing the sparkliest silver eyeshadow today I have ever seen which cheered me considerably. I just can't be too upset with anything when I'm around Brenda. She is absolutely proof that with make-up, less is not always  more. Sometimes, more is more! And beautiful! I don't know that I'd like the same make-up on anyone else in the world but it is perfect on Brenda. I think it must reflect her shining soul.

When I got home I knew I had to do something with the damn porch plants. Mr. Moon's been having some pretty serious back issues and I could not stand the thought of him picking up those heavy pots. So I did a lazy-girl version of frost-damage-prevention and brought some into the house that I can carry and covered the rest up on the porch with my stash of blankets and sheets and old tablecloths that I keep just for that purpose. 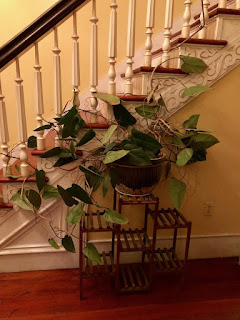 I have had that same plant or, actually, ancestors of that same plant for at least thirty years.
Nope. Not kidding. It grows like crazy and sends shoots out that will stick to walls with rooting tendrils. I have at least two other pots of it and also a large vase with some rooting in it. You can root that plant for years without any obvious degradation in its green healthy appearance. It does not care. It's sort of the perfect houseplant.
Or porch plant.

So I did all of that and got clothes off the line and folded laundry and probably did a bunch of other stuff too but nothing very important. I should be exhausted after such a day but actually feel pretty good which is perhaps a result of not sweating for at least 36 hours. Of course I bitched to myself like crazy this morning when I was hanging clothes on the line. My hands felt like they were going to fall off they were so cold. We really are not used to this weather and I noted that many women in Publix looked very well turned-out in their skinny jeans, sweaters, vests and boots. It was like they'd all gotten a memo. They also, to a woman, had chic, funky hairdos and very fashionable glasses. It was a good look and I was jealous and felt quite frumpy in my pilled old black knit jumper and clogs which I didn't even bother to wipe the mildew off of before I left the house.
I did wear earrings which for me is making an effort.
We will not mention the leggings I was wearing under the jumper which were the same leggings I'd worn under cargo shorts for my walk.

And none of this stuff matters in the least as our country is lobbing tear gas at babies and putting more and more kids in detention centers which are staffed by who-knows-who? As our president's lies become more and more hugely blatant and where he appears to think that addressing the troops from his privately owned club on Thanksgiving and telling them how great he is, is a perfectly presidential thing to do. Where...
Oh, let's just stop there.
It's so bad. It always seems as if things can't become any worse or more terrifying or immoral and then they do.
And they decorate the White House for Christmas with red "trees" that look like they were made from the pelt of Satan. 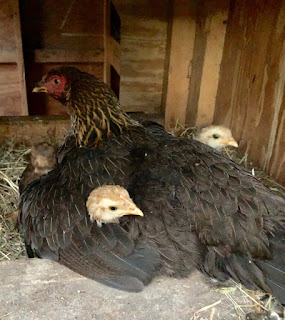 Dearie's little babies are still trying to sleep under her wings and she is doing her best to accommodate them.
That little hen has more courage, integrity, love, and devotion in one of her pinfeathers than Donald Trump has in his entire body.