Years ago I used to throw a big old Thanksgiving Eve party. It started small as could be, just having people over, some who might be in town just for the holidays and a few friends. I'd make a big bowl of easy pasta and the musician people in the group would bring instruments and play and it was always my favorite part of the holiday, even when it got huge and EVERYBODY came, worlds colliding with people from all parts of my life which was busier and more extended then. Kids running everywhere, music going on in the library or on the porch or outside with a fire going and oysters being cracked and slurped and it was wonderful.
Of course, it made getting up and doing Thanksgiving a bit harder and I always did Thanksgiving here then too, so it was getting difficult and frankly, I look back and don't know how I did it.
This wasn't even that long ago, really.

But then one year the ex actually booked a gig for that night for himself and the friend who always came to the party to play with him and my party was unnecessary because really, it was all about the music for me.
And the other friend is very, very dear to me and so is his wife and my ex's wife is a good friend of mine too, and so it was fine to go out on Thanksgiving Eve to a true, real venue to hear the music and another friend from days of long ago would show up too and it was always wonderful.
I always felt like I had a part in this because of various paths which I had been a part of back in those old, old days but in the last few years I have felt less connected and without a doubt not vital to the situation at all.

And here we are tonight. The gig is booked, it is happening and I am exhausted. I spent most of the day baking and cooking and Jessie and the boys came out and there was playing. 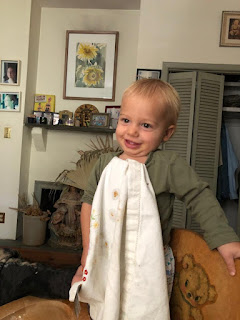 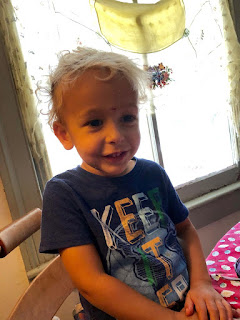 I asked August if his bulldozer was running.
"Not yet," he said gravely.
I have a feeling that when Boppy gets the tractor running, the bulldozer will start running as well.

Here's some pies I made. 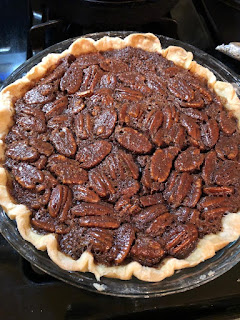 Chocolate pecan. Yes. It is a sin in all of the major religions. 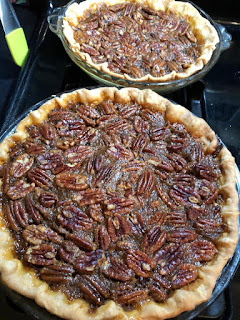 Regular pecan pies.
I tried so hard to do the pastry correctly. I spent a good fifteen minutes forking the ice water a tablespoon at a time into the flour and shortening and butter, making sure not to overdo it and I chilled the dough for hours before I rolled it out. I just suck at pie crust.

I made the regular cranberry sauce and the cornbread for stuffing and I have boiled the eggs for deviling and I've made angel biscuit dough and here I sit, thinking of a million reasons not to get dressed and drive into town. My sweet husband would actually do the driving so I don't even have that excuse.
Put on a bra, put on some clothes. Get in the car and ride for twenty minutes.
Go into a bar and see people I love, listen to music I love.
Really. Good. Music.

And there is every reason in this world to go and not one reason not to go and yet, I can't imagine going.

Well. I still have a few minutes to change my mind.

And speaking of going to hear music, The Rolling Stones are going to do an American tour this spring and summer. This cheers me immensely in that it would indicate to me that Keith is doing well. I mean, those insurance companies aren't going to cover a tour if they think that he's going to keel over onstage. This is just a fact, Jack.
They'll be playing in Jacksonville which is about two and a half hours away and my husband says, "Let's go!" and honestly- how many more chances am I going to get to see Keith Richards play again? It's not that I think he's ever going to die but I'm quite sure I will.
And yet, I am already thinking of reasons not to go, the main one being that they'll be playing at a huge stadium and unless we want to pay astronomical ticket prices, the old boys will be about as big as tiny ants viewed from a standing position and I will be surrounded by gazillions of people.

When did I become this insular, isolated hermit? Too timid to say yes to life?
I don't know.
I don't know shit.