This Matters So Much 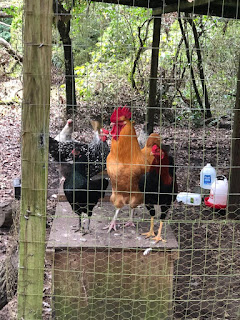 Since I voted a few weeks ago I simply scrolled past all of the VOTE! notices on Facebook and put my hopes in my pocket and got on with life.
Which today, did not entail a great deal.

I did go for a walk this morning and I just don't know what I'm going to do about walking. It simply hurts so much when I'm done. Muscles, joints, nerves- probably even corpuscles. I don't know. It's not so bad when I'm doing it but afterwards, I am, quite frankly, lame.
I also got rain-caught about a mile from my car but it wasn't so bad. It was more of a good shower than a downpour and the water was as warm as the air which was already so warm and muggy that the rain barely made any discernible difference.
While I was walking I noticed a guy in a rented flatbed truck pulling into various driveways and then out of them and after awhile, I'd see him driving back down the road or back up the road. I figured he was looking for something and sure enough, he stopped to talk to me and said he was looking for a road off to the right (and he gestured to the left, which was confusing) with "an Indian name." For the life of me I couldn't remember one. He said that three black cows had found their way to his yard in Capitola which is a few miles away and he was trying to figure out where they'd come from. I told him where I'd seen black cows before and he thanked me and drove off in search of the owners and I continued my plod up the hill.

Mr. Moon is back already. The weather in Georgia where he hunts has become abysmal, rainy and muggy like here which makes for poor conditions. I think his plan is to stay home until it gets cooler and the weather clears. I will admit that I am a bit disconcerted. Last night I made a vat of curried squash and sweet potato soup which he is not especially fond of but that's what we'll be eating tonight although he's going to a basketball game in Tallahassee later and the pita bread I'm making to try and round out the meal may or may not be done before he leaves.
Confused?
Me too, baby. Me too.

It's raining again and thunder is rolling across the sky to the west. I just stole this picture off of Facebook. 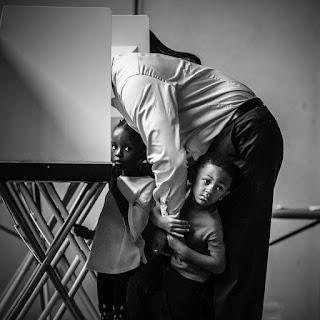 The photo was taken by Mark Peterson, if Facebook isn't lying and I think it's beautiful. That's Andrew Gillum, voting with his children.

Like I said, I've put my hope in my pocket but if you could dig deep enough to find it, it would look like that. Just like that.

Let's hold tight. Whether you wear your hope right on your bosom like a big ol' red, white, and blue sticker or keep it hidden away to try and protect yourself, just hold tight and don't let go of it entirely.