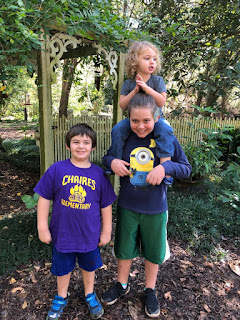 There they are, the Hartmann Three! They came over with their mama and roommate Lauren today. We decided to get together and go have lunch at the Hilltop. It was such a perfectly gorgeous day and you can eat outside there.
The Hartmann's had never been to the Hilltop.
"What do they have?" asked Owen.
"Name a food," I said.
"Shrimp?"
"Yep."
"Burgers?"
Yep.
"Crab?"
"Uh...not sure."
Turns about they have Krab. In a salad. Krab salad, in fact.
That place is crazy. I did not get a chicken salad today. I got barbecue. And fried okra. I could not possibly have eaten it all.
Gibson got a corn dog of almost inappropriate length. The children were amazed.
Since we were the only people eating at the time the kids could run around like crazy after they finished their lunches. Tag was played. There was much screaming and laughter.
When we got back to my house Maggie played with her dolls, putting them to sleep and then getting on the couch to go to sleep herself. Her mother and I kissed her good-night and covered her with a blanket. Later, I asked her if she wanted me to rock her. She came and got in my arms and I cradled her and rocked her and she said, "Sing Rock-A-Bye, Baby. Do it!"
I did it. She pretended to fall asleep.
The boys were rather wild and when Lily sent them outside they got an old piece of bamboo about fifteen feet long and hit it on a tree until it was of a sizable length to take home.
After they left I had to take a nap. They are off of school for nine days and Lily is already pretty sure she's not going to make it.
That does seem like a rather long Thanksgiving vacation.

So that was today. I also ordered a bathing suit online. I can't tell you how many bathing suits I have now. And there is something wrong with every one of them.
Truth?
There's nothing wrong with any of them. It's me and my body I am so upset with.
Well.
That could be an entire book in and of itself.
But I have to have a bathing suit for Cozumel. I mean- I spend half the time there in the water. I remember the last time we were there and I was snorkeling on our last day and began to cry. Underwater. I cried underwater. I was still crying when I got out and the woman who cleans the rooms had to put her arms around me and reassure me that I would be coming back. That it was okay.
I'm starting to cry a little bit right now, just thinking about it.

Mr. Moon is home. He is unpacking and doing laundry and I need to go make us some soup. Thanksgiving will be here in four days. I checked my thawing turkey in the garage refrigerator today and "thawing" is hypothetical. Why does this always happen?

Well, I've never served a frozen turkey yet and I've been doing this for about forty years now.
Forty fucking years.
Can you believe that?

How did I get so old so fast?