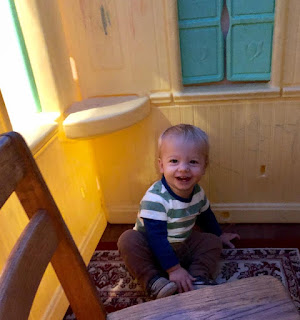 Man, it's been a day.
Well, you know- for me.
I got my tail into town at 9:30 to go with Jessie to the doctor for Levon's one-year check-up. There's a play house in the waiting room that the kids love. I personally think of it as Casa Virus or perhaps Chateau Bacteria but there it is and it's going to get played in. 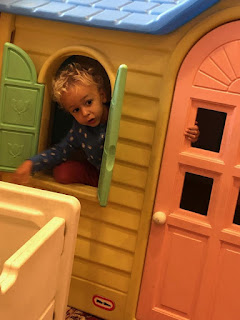 Levon was awesome and let the doctor listen to his heart and his lungs and he is fine, of course.
The nurse told us a funny story about her experiences with her own pediatrician when she was a child. She went to the same doctor I took my kids to so that allowed me to envision all of this even better. Her parents were both deaf and she was an only child and, according to her, spoiled rotten and when the doctor told her what to tell her parents she would sign things like, "I can eat all of the candy I want and I don't have to come back for a long, long time."
The doctor would observe all of this and then say, "I don't think you're telling them what I'm telling you."
Haha!

Anyway, after we left the pediatrician we went to a place called Southern Velvet Cafe and it's just the sweetest place. The most thoughtful place. They have coffee and a few egg dishes and pastries and hand pies. Things like that. They have an entire corner with a small table for children and toys and a pretend kitchen and costumes and hats and books.
The boys were enchanted.
There's a beautiful little room for baby-changing and both restrooms are non-gendered. There's also a tiny lending library.
It's pretty perfect.

And then we went back to Jessie's and I said good-bye to everyone and took two dresses that I bought off eBay to be altered because unbelievably they were too big. Just a brand-sizing thing. So I crossed that off my list and thank goodness.
And then to Costco for gas and then to Publix where I ran into every person I've ever known throughout my entire life.
Okay, okay. Not really. But just about. I saw two people I knew before I even got into the store!
One of the women I saw in the store burst into tears when she saw me and I hugged her and she, "Oh my god! I so need a Mary Moon hug right now!" and I hugged her harder. We talked and talked and talked, standing right there in front of the BOGO bins.
She never did tell me why she was upset but reassured me that it wasn't life or death.
Bless all of us humans and how we try so hard to put things in perspective which are obviously extremely important to us, even if they aren't life or death, as if that were the only criteria for deserving to be upset.

But the craziest thing that happened today was that the damn, damn dog from two doors down got out of his yard again and if Mr. Moon had not been home, there would have been a slaughter.
For those of you who do not know, there's a neighbor family who owns a dog who, if he gets the chance to escape, runs straight to our house to kill as many chickens as he can.
And he can kill a lot of chickens in a very, very short time.
I won't go into all of the details but I will say that by the time my husband got out to the yard and yelled the dog away, he'd been right at the entrance to the hen house where Dearie and her chicks were cowering in a corner.
Miraculously, there were no chickens killed today but the problem has not been solved. The owner refuses to take responsibility. It's his wife's dog. His wife let the dog out. Our neighbor between us has chickens which drive the dog into a murderous frenzy.
None of this, obviously, is HIS fault.
He claims he's bought $300 worth of electric fencing to put up and he'll just throw the dog up against the wire a few times and that will teach him not to try and cross it.
Yep. He said that.
He also said that he'd pay for any chickens his dog killed and when Mr. Moon pointed out that these chickens are just as much our pets as his dogs are his (or his wife's, I guess), the man laughed.
I haven't even mentioned the Rottweiler who also got out because she's in heat. I've never seen her.
I'm not just concerned about my chickens in this situation. If that dog got out and one of the babies was in the yard, I have no guarantees that he wouldn't go for them.
It's a bad situation and I am not sure what to do.
Call the law?
It's going to be our word against his. And this is an extremely rural county. However, if there is an ordinance about keeping dogs contained or leashed, we have a complaint.
Despite what he said about throwing the dog up against the wire, I don't think that the animals are usually mistreated or neglected, especially in the context of this county.
But at the end of the day (which it is), I'm just so very, very grateful that my husband was home and that all the chickens are well and alive.
Things could have turned out so very, very differently.