Words Of All Sorts 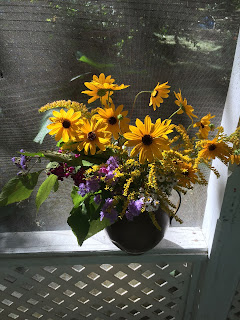 A friend of mine e-mailed me this morning to say that, no pressure, but he'd checked the blog to see if I'd posted anything about Dylan winning the Nobel prize for literature.
This is what I answered:

Just got back from my walk. I will probably say something about it. I've had a lot of thoughts, reading this B. Springsteen autobiography. Not about Dylan but about musicians in general and how they are as varied and different as say, lawyers or mothers.

As I wrote Hank last night, seems to me that one of the main differences between Springsteen and Richards is that Richards probably had the better childhood, believe it or not. He had a lot of love. Also, Springsteen grew up Catholic and has never really quite abandoned that faith. It's bloodstreamed for sure. And he's spent most of his life in therapy. Richards of course just became a junkie although supposedly he's given up heroin whereas Springsteen will be introspecting for the rest of his life. Springsteen knew from the very beginning that he was not interested in just being a part of a band. He is and always has been the boss of his band. He gives everyone mad props and seems to have, as does Keith, very intense relationships with other men and has grieved mightily when they have gone through bad times. But overall, I'm not enjoying this book as much as I did Keith's. Springsteen's soul is darker although he surely does speak highly of every fucking body, even those he probably has no call to. But damn- not one scene where he does a Keith and pulls a knife on someone. He can be funny though. But it's a sort of sad humor and always leads back to something dark and introspective.
How odd is it that both are long-time married to women named Patti?

Anyway, feeling pretty dark myself today. I think this whole Trump insanity has been a trigger for bad feelings, as the Cosby thing was. You read about things like "triggers" and you feel like that may be a bunch of PC crap and then it happens to you and you realize...well. Fuck. Might be true.
It is cheering, though, to see Dylan win the Nobel. I mean- it's about damn time. God love the old man. I wonder how that made him feel? I doubt we'll ever truly know. Even if he ever decides to write about it, it will probably be impossible to understand.
Which makes him Bob Dylan.
There was one passage in the Bruce book where he was talking about playing that night of the video I sent you and how Bob was so nice to him and said, "If you ever need anything, let me know," and Bruce said, "No man. You already gave me what I needed. Thank you."

My friend texted back and said, "That would be a wonderful post right there."
So, I guess I agreed or, if not wonderful, at least adequate.

And here's the video I was talking about. It was at the Kennedy Center Awards in 1997. I love the expression on Dylan's face. He's a mystery, that man, and we'll never pin him down and we don't have to. In fact, we shouldn't.