The Topic Is Mostly Shit, Once Again 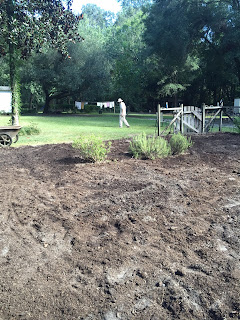 So, I thought, as I shoveled and toted and spread the mushroom compost today. What the hell is this shit?
I had a vague idea that it was the leftover material after mushrooms had been grown on it. It seemed to contain what I would have to call horse shit (I've shoveled my share of that, believe me), along with straw and, well, I didn't know. It smelled not poopy but a little acrid. I could smell ammonia. I could smell something almost like creosote. What was I putting on my garden?
I came in for a break because I had to take a break about every twenty minutes and I'm not kidding you. It feels lovely cool in the house but out in the sun working it was Sweat City. Not to mention that I'm sixty-two years old. Anyway, while I was on my break, I googled mushroom compost.
Here's what I found on the all-knowing internet:

Spent mushroom substrate is the composted organic material remaining after a crop of mushrooms is harvested. Mushrooms are grown in a mixture of natural products, including horse-bedded straw (straw from horse stables), hay, poultry manure, ground corn cobs, cottonseed hulls, gypsum, and other substances.

Yep. That made sense.

So. Between the two of us, Mr. Moon and I got all of it spread out on the garden and then Mr. Moon tilled it in and now I'm watering it in. As it is, just off the truck, it's too salty and intense to germinate seeds in, which would sort of negate the beneficial properties of it so it has to mellow a bit, as does horse shit or chicken shit. Oh god. Y'all don't need to know this. You really don't. And if you're a gardener you already do so I'll shut up now.

So now neither one of us can hardly walk and we're moaning and complaining about every movement we make and we're laughing, too, because GOD DAMN! how'd we get so old? Mr. Moon also worked on his deer blind project and smashed his thumb and I got stung by a wasp that had crawled into my glove to take a nap while I was taking a break. This is not the first time that's ever happened to me and it's my own stupid fault for not checking before I put them back on. Why a wasp would want to crawl into a nitrile coated glove, I do not know, but it happens.

And so it goes. My anxiety got sweated out of me, mostly, and I have venison marinating and the laundry is put away and it's peaceful here in Lloyd. The chickens are having their last scratch-about before roost time. I opened the door to the big coop today to let the Darla, Dottie, and Nicey II go out to explore the world but I believe the very idea frightened them so much that they spent most of the day huddled in the baby coop.
Them chickens ain't right.

Maybe tomorrow I'll go buy my seeds and get those started in the ground. Maybe even a few already started plants, too, just to get things going. I am SO ready to start eating some fresh greens. I remember back when it was only in spring that I got the garden fever but these days, it seems to come on at least as strong, if not more so, in the fall.

Let us all sleep well tonight, my dears and dream of green and tender things.
Having said that, I'll probably dream about shoveling shit all night.
Well, there are worse things to dream of. Trust me. There's shit and then there's shit and horse shit is not that bad and good things can come forth from it.