Having Visited The Church Of Pain 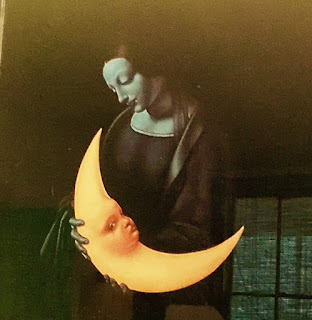 I got up in the early dark morning, having barely slept for the proceeding two hours and got dressed in the chill and drove to town, to the hospital, where I finally found where I was supposed to be and got to see my friend in pre-op. She was in the room with her brother and cousin and I just went in and kissed her, told her I loved her. There is a two-person visitor limit in pre-op and I did not want to take a space which rightfully belonged to a kinsperson.

And then, for the next three or so hours, we waited. I cannot give details because my friend is very private and has told no one but a few family members about what's going on and that is her pure and simple right. But it was a lengthy surgery, and some of it came out better than we had feared and some just as we had thought and the path before her is not going to be easy or pain-free.
I was a bit surprised to see that the surgeon was the same one who did Mr. Moon's surgery a few years ago and had done another one on him many years ago and indeed, on May when she was but a bit of a little dancing girl, and so it comforted me to know that he had been the one welding the scalpel.

After he spoke with us in the surgical waiting room, I left and came home and ate some leftovers and laid down on my bed and read for awhile until the words were making no sense and I closed my eyes and slept and then woke up and felt as if I could not move. My bones were so cold, the bed felt as safe and protecting as any mother's arms might have felt and I laid under the heavy covers in a position such that I felt no pain at all and anyone who had observed me would have thought me deep, deep in sleep, my breath regular, my eyes closed, but I was awake, and not even near that line where dream and reality blend, that dozy drugged-like place, but simply still.

Here is what I was thinking of- cake.
I desperately wanted a piece of cake. Spice cake, heavy and dense with nuts and raisins and a white frosting.
Perhaps it was the old A&P Spanish bar cake I was wanting and I kept thinking I could get up and get out of that bed, that state of near catatonia and make a cake. Not the Spanish bar cake from my childhood, but a good cake, nonetheless and I could almost see the fork, cutting into a slice, the moist crumb of it, and could almost taste the cinnamon, the nutmeg, the spices, the dark sweetness of it, the ridiculously sweet and silly frosting.

Finally, I opened my eyes and tentatively moved a leg, an arm. I closed my eyes again and went back to that cake place but finally, I got up and went to the kitchen but I did not have what I needed for the frosting and so I gave up on the idea and went about my chores, my laundry, my dishes, my floors. My husband came home. He had gone to Monticello to vote and we talked about that a little bit, and I wanted him to put his arms around me and comfort me but I did not know how to ask him and he is in the garage now, doing something with machines and hammers.
I swept the porches and their steps.
I am heating up soup for our supper.

I am still thinking about cake and what I am thinking is that the cake has taken the place of sorrow in my soul but of course, not really. And even if I made that cake, even if it was as good as the one in my mind, it would not, could not fill that place where sorrow lies.

I think yesterday was Kathleen's birthday. There is no celebration this year, of course.
I think of the friends whom I have lost over the years and this sorrow encompasses their absences from my life. I think of all the time I've spent in that hospital and today as I walked the hallways, waited in the waiting rooms, I realized, as always, that except for the maternity/newborn unit, there really is no joy in hospitals. Everyone has a sadness about them, everyone is there waiting to hear news good or bad, waiting to hold the hand, kiss the face of someone they love as they face something they would rather not.

Well. So it goes. And hopefully, my friend will come back from this particular surgery in less pain and with a clearer picture of what is ahead, with hope instead of the fearful dread she has lived with for too long now.

Love each other, y'all. That's all we really have.
And cake. Or at least the idea of it.