Kumbaya, Y'all. It's A Party

Owen has come to spend the night. Gibson decided to go to his other grandma's so that he could play with the darling Lenore. Although we miss him, it is lovely to have Owen here. I think he's having a good time. He's had his hand in a lot of different things today. I say "hand" because he's still got a bandage on the hand he cut last Sunday. He's being very good about keeping that one clean.
His feet are another matter.

He helped me in the garden some. We pulled up the sweet potato vines and dug around and this is what we found. Well, these and some rotten ones.
Pathetic.
Thank god we don't depend on those to sustain us through the winter. We would die.
Oh well. It was a noble experiment.
He also helped me with some weeding. There's a sort of shamrock-y weed that has the deepest root which looks like tiny garlic buds which I happen to think is a pretty fun thing to dig up. Of course, I'm weird. I showed Owen how to do it and he thought it was okay fun too. So he did that for awhile.

Then we moved on to the kitchen where we washed our hands really, really well (or in Owen's case, hand) and made bread. He liked pounding the dough. We set that to rest in the bowl and I did remember the yeast today.

After that, it was pumpkin carving time! At first, Owen declared that pumpkin guts were the grossest thing ever and he refused to touch them with anything but a spoon.

This aversion quickly passed and before I knew it, he was kneading those guts between his fingers like he was getting paid. I hadn't carved a pumpkin with a kid in a long time and I have to say that I've missed the experience.
As I have said here more than once over the years, I am a pumpkin-carving traditionalist. Don't even talk to me about those fancy pants stencils and shit. I do not want to use surgical instruments to create a work of art. I want to make a goddam Jack O Lantern and that is what I make. Triangles are involved. 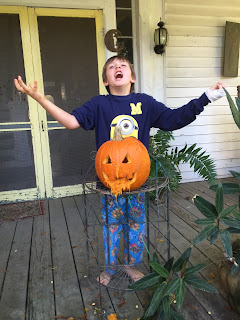 We did get a little jiggy with it and used some of the innards as puke coming out of the pumpkin's mouth AND nose. (That was Owen's idea.)
This is an innovation I approve of.
We shall light the candle when it gets dark.

Somewhere in all of the activity Boppy and Owen did some bike riding. Mr. Moon has been looking for a bike to ride and let me tell you something- they don't make bikes for men who are six feet, ten inches tall. However, the other day at work, he was telling someone about his search and another employee overheard the conversation. It turns out that a relative of that person who is also six feet, ten inches tall had had a beach cruiser and no longer needed it due to an extremely unfortunate event and so, would Mr. Moon like the bike?
Well yes, Mr. Moon would. And so the bike was shipped here and he has worked on it some and he is enjoying it although the seat is still not tall enough for him as his legs are 3/4's of his height, at least. 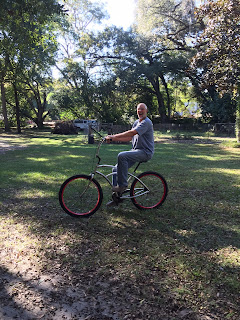 Still, he is delighted by it and has ordered a thingee to get that seat up a few inches. Last night he rode it down to the old truck stop and reports that there are many, many cats there, some of whom look a lot like Maurice and Jack.
Go figure.
Anyway, Owen got his bike out and they rode around the yard together. 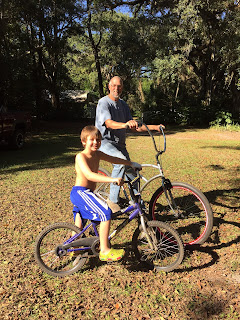 And Owen helped me get clothes off the line and gather the eggs and since I posted that last picture we got a call that Gibson had decided to come join the fun so Jason brought him over and Maggie's here too, but just to visit. Not spend the night. 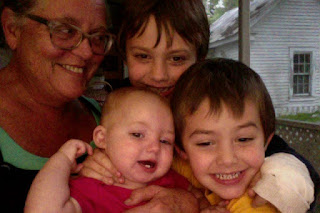 And dear god, now they've all gone out to light the brush pile and there's a smaller fire to cook steaks on and the bread is made into loaves and is rising and Owen and Gibson are going to help me mash potatoes and make salad (so they say) and I've had some very, very good conversations with my oldest grandchild and the brush fire is popping like it's got firecrackers in it (bamboo?) and the chickens are going crazy 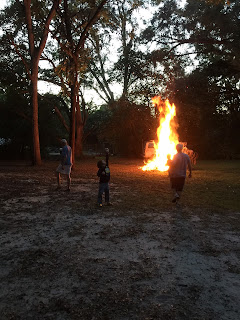 and well, it's just another peaceful night in Lloyd. 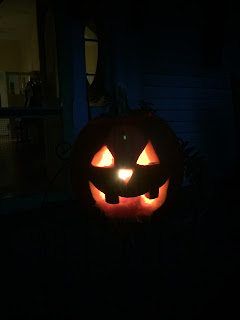