Antidepressants You Don't Need A Prescription For 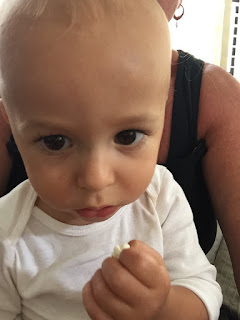 I was stuck in my darkness today until I went to town to stay with this big-eyed guy for a few hours. He was asleep again when I got there so I settled in on the couch with a New Yorker and read an article or two but before long he started peeping and so I went to his room and he held his arms out to me, seemingly not surprised at all to see me instead of his mama, and we went to the kitchen and he was as happy as a child can be to eat all of the crackers and some popcorn. I know how much he loves to put the lids on things so I brought him a recently emptied out Mentos gum container and he played with that thing for over an hour. I put popcorn in it and this delighted him. He'd eat and close the lid and then open it up and fish some more out.
We got popcorn and cracker crumbs everywhere. The child knows the sign for "more" and it was used frequently.

He loves the couch. It is his rock gym, his playground. I would take him and set him down on the floor with his toys but he'd go right back to the couch and climb on. 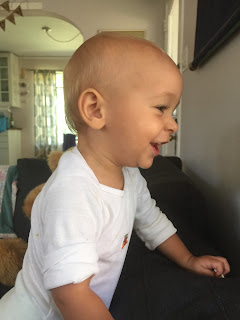 "You goof!" I'd tell him and he'd laugh and sign for more crackers.
We started looking at some books and he backed himself into my lap so we could read them together better. He liked the sea creatures book the most and the turtle is his favorite in that. "Where's the turtle, August?" I would ask him and he would point that little ET finger at it.
He was wearing a little owl sticker on his onesie and he would pat it and say, "Hoo-hoo!"
Brilliant child.

His Boppy came over for a little play time and snuggles too. 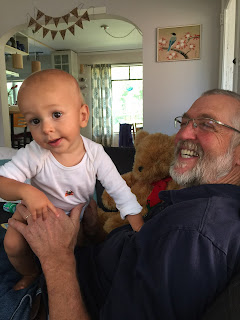 He showed his grandfather the turtle, the owl, and made the sounds of it. He shared his cracker with the giant teddy bear and also sat on its back and rode him like a horse and hugged him, too.
He drank water from a glass like a big boy and he was just in the best mood, never a tear or even a fuss.
When his Boppy had to leave, he waited until he got into his truck to begin to wave and say, "Bye!" and to throw kisses. He even grabbed my hand and kissed it and tossed it into the air. I took him to change his diaper and he was well behaved and I ate all of his toes and tickled his tummy and he showed me where my nose was.

Soon after that, his mommy came home and we watched her get out of the car and cross the yard to the door from the window and he shimmied and laughed and reached out for her and she took him and he settled in for some nursies because it had been HOURS! and he was happy.

Such a precious boy and it makes me feel so good to know that he feels comfortable with me now and trusts me and does not worry about where his mother is when he's left in my care. I think I was deeply scarred in my childhood when my mother had to be away for one reason or another and I'm sure that it was because my childhood was so fraught with unhappiness and the threat of so much uncertainty due to the situation we were in at that time. One of my most piercing and lasting childhood memories is being left in a church nursery while my mother attended the services. I can remember the kindly (and I knew she was kind, I sensed it) attendant trying to get me to stop crying by offering me Play Dough and I didn't want to play with the Play Dough, I wanted my mother and finally after an eternity, all of the parents came to collect their children and it seems to me that I was the last and I can remember looking out the doorway, so afraid that my mother would never come and when at last she did, she was limping because one of the heels on her shoes, her fancy church shoes, had fallen off, and my relief was enormous.
I do not even remember her coming into the nursery to get me, only that sight of her coming down the hallway, my mother, my savior, my comfort. This experience is burned into my brain, and I am very loathe to be the one left with a child who only wants his or her mother and so when August holds his arms out to me to be picked up, when he settles into my lap happily to be read to, when he laughs at me hiding popcorn in the Mentos container, I feel as if a great blessing has been bestowed upon me.
He has not been in my care since infancy, the way Owen and Gibson and even Maggie, to a much lesser degree have been but it is obvious that he is old enough and accepting of me now for me to take care of him and that brings me much joy. Because he has been loved so well and so fully by his parents since birth, he knows he will be taken care of and seems to think of my tending to him as nothing more than a little adventure.

When I left, he was outside, stealing spinach from his parent's raised bed garden. 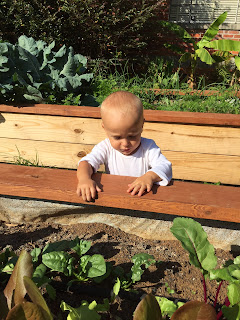 And I was the one who was loathe to leave him. I kept ducking back for a kiss, for a sweet nuzzle but he was as happy for me to go as he had been to see me when he woke up and he waved and he blew kisses and he said his "Byes!" and I drove away, feeling as if I was the luckiest Mermer in the world, as indeed I am, and my spirit was restored and my heart was happy and I continue to be in a much better mood as I have made the biggest pot of venison and vegetable soup to share with my friend who had surgery and her family.
I mean, seriously. Biggest. Huge. Trust me. It is the biggest and hugest. It will be the best biggest and hugest. And see? I can even make jokes about Trump again and let me say that I probably got more joy out of hanging out with my grandson and coming home and chopping meat and vegetables and putting them all together into this soup than Donald will ever experience in his incredibly successful life.