Pictures Of A Great Day 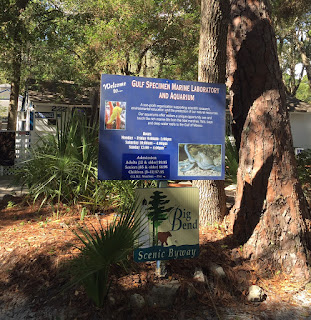 Tucked away under the pines near the Dickerson Bay in Panacea, Florida is Jack Rudloe's Gulf Marine Laboratory and Aquarium. It truly did start out as a marine specimens lab and Jack would collect all sorts of things from the bay and the sea and pack them up and send them to universities and labs all over the world for study.
He still does.
He and his wife Anne, a Buddhist, a scientist, an author, a professor, who died a few years ago, raised their children there beside the bay and expanded the lab into a place where school children could come and actually touch sea creatures in various tanks and look into other tanks to see everything from octopi to sharks to rays to turtles. Jack especially loves the turtles and his book, Search For The Great Turtle Mother, is one of my favorites. Fishermen bring him injured turtles they find and at the lab they are treated and taken care of until they can be released back into the ocean and when those days come, it is always a special occasion and Jack wears a suit as he wades into the water to give back one of these most precious creatures to the world in which it belongs. 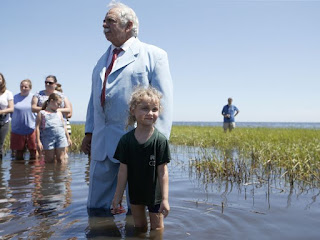 I've been taking my kids to the Specimen Lab since they were little and it's grown and changed some, but not too much. There's a very cool gift shop and a few things for kids to play on in the front of the building and some picnic tables. 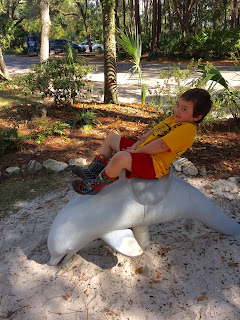 It is, as you can imagine, a favorite field-trip destination.
There is also a dock which Jack wrote about in his book, The Living Dock, and speaking as someone who spent much of her childhood, and certainly most of the happiest parts of it, on a dock over a river, I have to tell you that this book, too, is worth reading.

So that's where we went today, all of us but Hank who is still thrust firmly into his work with the Gaines Street Festival and it couldn't have been a better day unless he too could have been there. 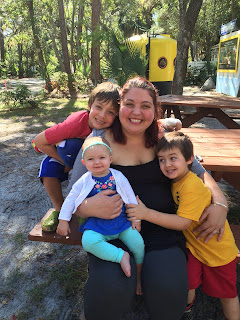 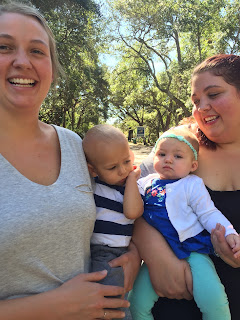 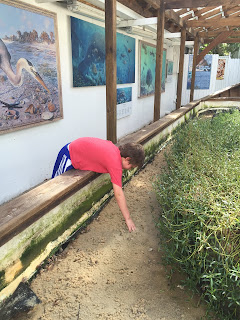 The fiddler crab enclosure. Owen could not keep his hands out of it. He was creating entire kingdoms of fiddler crabs in his imagination and there was in fact a King of that kingdom who pinched Owen with his kingly fiddler crab claw. 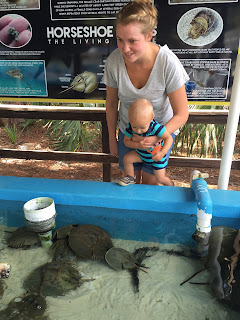 August desperately wanted to get into the tank with the horseshoe crabs. 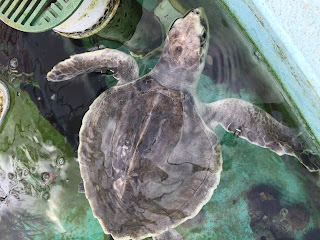 One of the juvenile turtles waiting to be released. 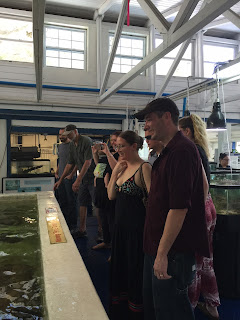 The family watching the stingray get fed. 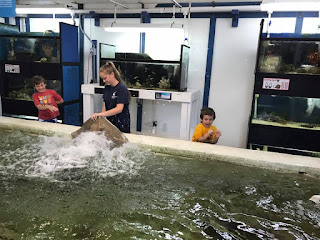 It was very dramatic. Gibson loved the stingray. So much. 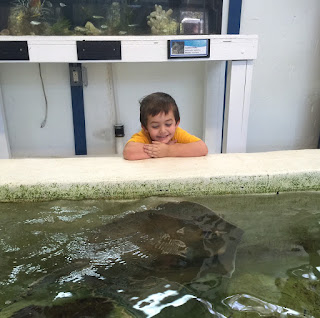 "I am so happy," he told the sweet young lady who was feeding the ray. 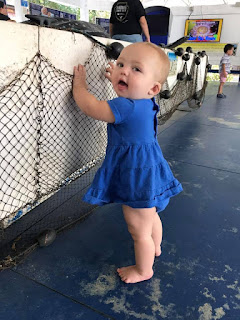 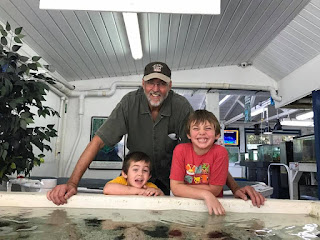 Some of my handsome lads. 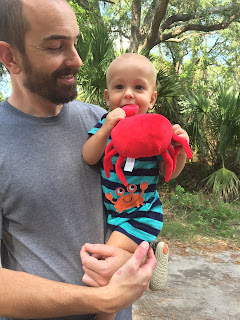 August with his crab from the gift shop. It made him wriggle and wiggle with great delight.

After an hour or so, we were all starving and headed for a local...seafood restaurant. Of course. 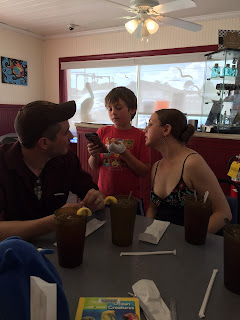 Owen instructing May and Michael concerning Pokemon stuff. I think. Hell if I know. 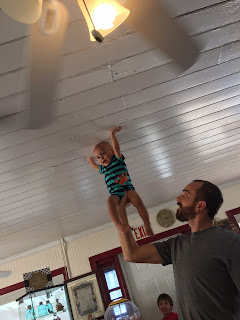 August holding up the world.

It was simply the most beautiful of days. Cool enough and warm enough and simple enough and amazing enough and a wonderful continuation of the time Mr. Moon and I got to spend with Owen and Gibson this weekend. On the way there and back, Owen helped me with the Sunday crossword puzzle (damn, that child is smart) and leaned his head on my shoulder as we figured out the clues and filled in the spaces.

This world is so filled with anxiety and fear and horror and trouble right now and I feel as if we stepped away from it all for a little while into this tiny but extremely real and important world where a very good man and his very good wife and now their children have spent and do spend their lives trying to educate the old and the young as to the importance of our seas and our marshes and our bays and our rivers and the creatures who live there. 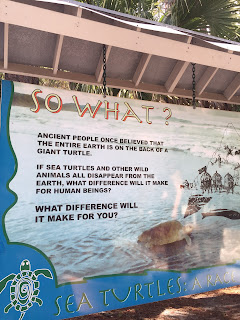 The message is given over and over with art 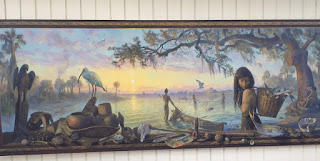 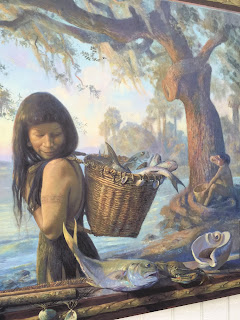 and with words and mostly with the creatures themselves in such a way that everyone can understand.
It is truly a treasure, this place, and if this planet does survive, it will be because of people like Jack and Anne Rudloe and certainly not the politicians.

And that's all I need to say about that.

Yours in gratefulness and love...Ms. Moon