I Did Not Have To Take The Valium 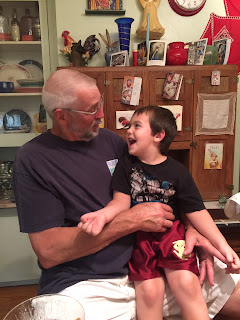 Things have been a bit crazed around here lately. Both sons-in-law have taken does to fill their freezers with good meat and last night it was Jason's turn and he and the boys came over so that Jason could use the equipment here to clean his deer and the boys ran in and out of the house and ate shrimp and corn and shouted and laughed and were merry and wild and I was barely hanging on with the anxiety which had my core tightened to a steel knot of twisted wire but it was okay. It really was and by bedtime, I was so glad to get in my bed and finish Springsteen's autobiography. I had saved just a few last pages to read and overall, the thing that got me hardest was the fact that Bruce has spent so much of his life suffering and battling depression and then, in his sixties, anxiety.

So much of what he described could have come directly from my own mouth- the inability to find comfort, the lack of interest in anything, the constant feeling of certain and imminent doom. I thought about all of this- how Bruce Springsteen who probably has one of the strongest wills on the planet, who through talent and belief and the hardest work imaginable has made a life which not only touches millions but also includes a family life with a loving wife and children raised and doing well. And that if this man who has had access to every sort of medical care available and who has had the loving support of his wife and his friends, found himself unable to leave the bed for days at a time- well, then I needed to admit that these horrible teeth of the black dog which bite my ass are not my fault and that there is no shame to them. I do not invite their horrible terror. I do not in any way ask them to come and live with me.

I am grateful to Bruce for speaking openly about these things. About his therapy, his use of medication, his struggle.

I enjoyed the book and here I will give you my favorite line:

"I've come across many spirit-filled folk in my travels but no one as spectrally beautiful as Keith Richards."

He had never met the Stones until a few years ago when Mick Jagger fulfilled his teenaged fantasy and called him to ask if he'd sit in with them on "Tumbling Dice" in the concert that the boys were playing in New Jersey. The same one I saw on pay-per-view two years ago. Three years ago?
I don't know. Time flies.
He of course accepted and when he got to the rehearsal, he said it reminded him of playing in a garage as a teenager, the same set-up with mics and speakers and that he was completely overwhelmed to be in the presence of the men who had invented his job.

Of course I loved reading that. That was one of the joyful parts of the book and there are plenty in the book along with the darkness.
And let's face it- if Springsteen wasn't who he was with his demons of darkness, he could never have written those songs, would never have had the motivation to prove himself to himself.

Knowing what I know about depression and anxiety, I cannot in good conscience say that it was an even trade. But it was what it was and the world is a far richer place because of him, exactly who he is.

So, this morning I woke around four and had a hard time sleeping for the rest of the hours left to me in the bed because I knew I had to get up and go with Lily and Owen and Maggie for a follow-up appointment from when Owen had his little incident on the bus a few weeks ago which may have been a seizure. So I drove to their house and we dropped Gibson off at school and went to the hospital, my least favorite place in the world and I had even tucked my last remaining Valium in my purse in case I needed it but it was okay. It was all okay. The doctor talked to Owen and his mother and then they did an EEG and if nothing shows up, that will be the end of it unless something else happens. Lily's mama-gut tells her that her boy is fine and of course, I trust that.
And also, of course, being the anxiety-ridden-Chicken-Little-the-sky-is-falling person that I am, I still worry.
But we shall see. While the test was going on, I took Maggie out for a walk and in her stroller and she fell asleep and we sat under some trees and it was peaceful and good.

After the test we went and picked up Gibson and then we met Jessie and August and Hank at Japanica! for a lunch. Here are all four of my grandchildren sitting on the most comfortable couch in the world. 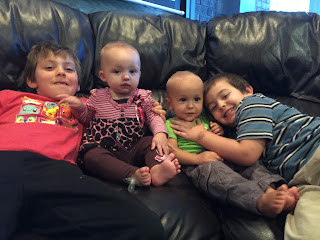 And here are the two babies, considering each other, as they do. 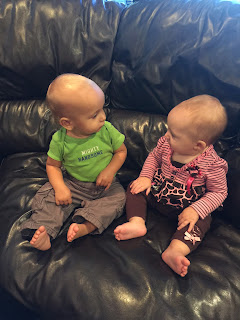 After lunch I went back to Lily's house and got my car and drove back into town and got to stay with August for a little while as his mama had a doctor's appointment of her own.
He was asleep when I got there and Jessie told me that he would probably stay down for an hour or so and I laid down on the couch with a New Yorker I've been trying to finish for a few days and of course, about ten minutes after she left, he woke up and he was so sad, that little boy.
I worried that he would be sad the whole time, missing his mama, his beloved mama who is with him day and night but we had a graham cracker and we looked at books that he loves and we played with a few toys and before I knew it, he was happy and beaming and grinning and guffawing as he took the top off of this sippy cup and put it back on, took it off and put it back on. 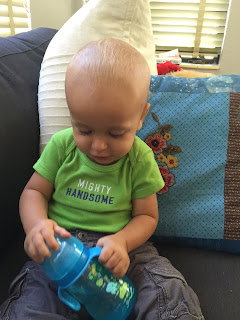 We put things in a bag and took them out, we put things on our heads and laughed and laughed. We kissed the giant bear, we read more books. We had fun. 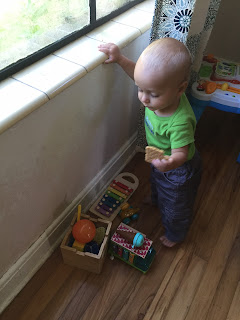 He was perfectly content with me, he was a merry little soul, and when his mama came back he was happy about that too but he had the good grace not to cry and pretend that he had been bereft the entire time she'd been gone and I was delighted.

And by then, my soul had calmed. The knotted wires of steel in my belly had disappeared and I left with many kisses and went to the store and came home and it had been over nine hours since I left my house and it was all okay.
All.
Okay.

And so that's been my day. Having talks with a seven-year old and a four-year old and having snuggles with babies. Being with their mothers and also my son. Feeling needed and adequate. Being loved and giving love. Thinking about things, deeply and with distance and rationality from my own perspective and from the perspective of others.

Time to go make the supper.