Good Lord but what a day starting with actually last night when I heard something flinging itself against the door of the hen house accompanied by chicken distress so I sent my husband out there (of course) and he reported that there was a possum in the hen house and Otis had been the one trying to escape out the closed door which is what I heard.
Now, for those of you who do not know, a possum can tear up some chickens, especially small ones and I have six of those so Mr. Moon took matters into his own hands and well, that possum won't be eating any of MY chickens, sorry Mr. Possum or Ms. Possum and life is tough out here on the range.
We don't know how the critter got in there although he was probably hiding out in the run/coop which he/she would have had access to all day long and then crept in after all the chickens were in their doze coma.

So this morning I had to make the decision on whether or not to go with my friend who just had surgery to an appointment which had become available very suddenly and I hemmed and hawed and then I went and I was so glad I did because the news we got was absolutely best case scenario for the situation and we were sort of stunned into relief and the doctor was wonderful. He pulled out the foot of the exam table (no one was ON the exam table) and used the paper on it to draw us diagrams and pictures and outlines about everything that has gone on and is going on and he spent at least thirty or forty minutes explaining everything in a way that made such sense and was so thorough that we barely had any questions. Hey! I learned a LOT!

Such was my relief that when I finally got home after going to the store and made my bread dough, I realized right as I went to set it to rise that I had forgotten to put the yeast in it and so back into the mixer it went and I kneaded it some after that and although it took longer to rise than it normally would have, it did indeed rise and I eventually delivered soup and bread to some happy people and we hugged and gave great thanks and now I am home and pretty much exhausted because I've been going at it all day long with one domestic chore or another, not to mention the two hours in a MEDICAL FACILITY where I had to pretend to be an intelligent adult, etc.

So it was an excellent day and I got a lovely package in the mail from a blog friend which included such love and charm that I felt loved and charmed to pieces and when I was talking to Mr. Moon in the Glen Den just a little while ago, Maurice darted into the fireplace after something and I got some pictures of her. 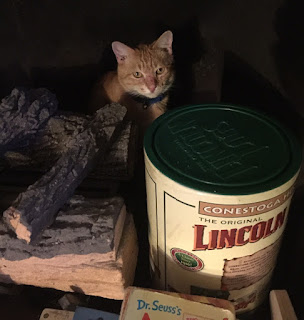 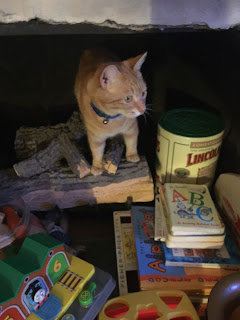 And so it goes. A day that I had thought was going to deliver us news we did not want to hear but which delivered news which was sweet and there is nothing better than that.
Also? Clean sheets on the bed for when I finally get to lay my head down.

Here's what the sunset looked like over the garden. 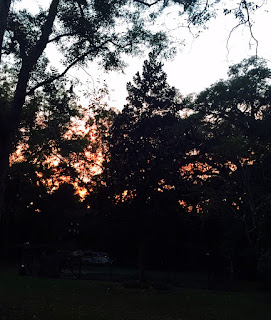 Fire in the trees and peace in the heart and cat in the fireplace and crab legs about to go into the pot and a little loaf of bread and salad with micro-greens from the garden and a sweet man to sleep with and golly- who knows what tomorrow will bring?
I probably shouldn't say that, should I?

I wish everyone in the world could enjoy a day like this. At least now and then.
Just...as I said, golly.
Now if these fucking gnats would just go away and quit tormenting me and if the possums stay out of the henhouse, it would all be about perfect but life is rarely perfect and good enough is absolutely good enough.