Bless The Mothers, Bless Their Babies 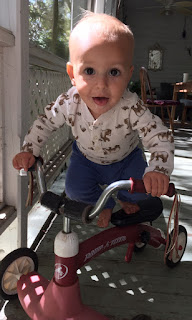 Jessie brought her boy out to see her daddy and mama today and we had a very fine time with them. Now- let me stop right here. A momentous thing happened last night in that both Lily and Jason witnessed Magnolia June taking three steps at a time.
As in- she is starting to walk.
But August, who is three months older than his cousin, has no interest in walking whatsoever. He can rise from a sitting position to stand all by himself but when he wants to get from one place to another he does a crab crawl like none other I've ever seen and he is fast and except for getting his hands dirty as he goes, there seems to be no reason whatsoever (in his mind, at least) that he should simply walk. Now, I can't wait for him to start walking because he's such a skinny little monkey and when he does start walking he's going to look so adorable because all babies look like drunken monkeys when they walk and he's going to be the cutest little skinny drunken monkey on the planet.
Perhaps he knows this and is preserving his dignity whereas Maggie just wants to keep up with her brothers and is not overthinking the situation.

So. Okay. We have this little Radio Flyer push trike sort of a thing out here that I believe my ex-husband and his wife gave us when their grandchildren had outgrown it, knowing that I had grands who could and would appreciate it. I gave it a quick wipe-down with the Fabuloso-vinegar-water spray today and we offered it to August for his enjoyment. He was so excited about it that he almost leapt from his mother's arms and when he finally got to it, he figured out everything he could do with it in about one minute. 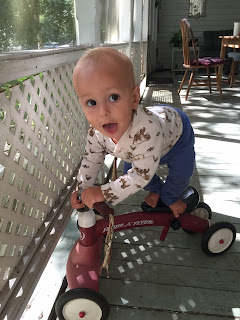 This included standing on the seat and dare-dogging it. He rode it, he pushed it.
He loved it. 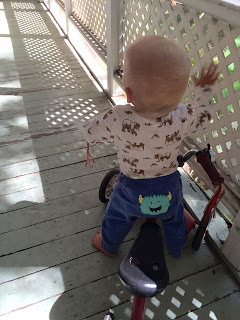 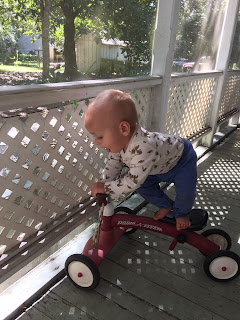 He figured out how to sling a leg over the seat and to get on or off it. He was the boss of that thing.

Before he and Jessie left, I cleaned his hands of the Lloyd black dirt but he got them dirty again, escaping from the kitchen and making his way back to the porch and back to the trike.

So he was amused and we were too.

His Boppy babysat for him while Jessie and I went down to the Subway next to the Flannery O'Connor convenience store and got lunch which we brought back and ate as a picnic in the backyard. 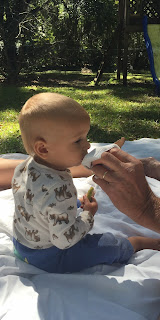 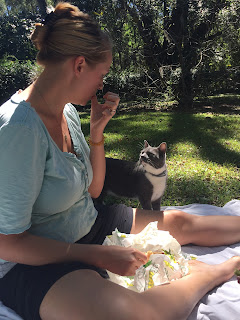 It was just the most beautiful day and the kind of day that makes you want to hit the road on a trip down long and interesting highways with no destination in mind, or perhaps to take a ride out on a river. Something. Anything.
But we stayed here and that was okay, too. We discussed the washing machine situation and Mr. Moon called a repair service and dammit, it costs so damn much to have someone come out and replace the shit that's broken that it's hardly worth it and I think we're going to end up buying a new one and, researching the blog, I believe that washer is only about five years old and that's a fucking sin.
I don't know.
Anything beyond picking out what sort of a sandwich I wanted was just too overwhelming for me today so we haven't done anything about it and have spent the entire day doing not much of anything beyond playing with that boy. 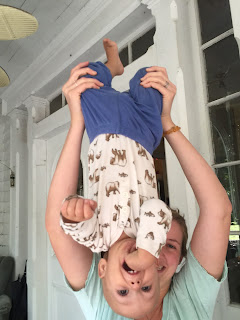 Well, that's all right.
He's a good boy to play with and it was proven today that he is as happy as he can be out here in Lloyd with his grandparents and so he needs to start hanging out a little bit more and maybe giving his mama and his daddy some time off.
It's not like we don't have any toys or anything interesting to look at or do. It's like a damn day-care around here plus, petting zoo, plus library. And snacks. Plenty of snacks. And porches to swing on and rock on and hang out on and mermaids to look at. August was fascinated by my mermaids, probably because they all have bare breasts.
Or as we call them- nurseys.

He's just such a delightful child, as all of my grandchildren are, and when he left he was holding a feather we found in the yard by the car and had tickled him with and was tickling his own head with it, and also a giant bear which I gave him because we have three giant bears and god knows, nobody needs three giant bears and he loved it.

Despite all the joy he brought us, I have felt a bit under the weather and low-spirited and so have made a pot of garbanzo bean and everything soup, and have some bread rising. The laundry is piling up and I should have taken the garbage and recycle today but did not.

Well, so it goes and so it is and tomorrow I guess we'll go buy some new expensive crap washing machine that'll get us through another five years and tonight I'll get in my bed and read some more of Springsteen's autobiography which I am very much enjoying.

One more thing:
It appears to me that every famous guitar player who ever lived had a mother who bought him his first guitar. They may have been cheap guitars, they may have come from the Sears and Roebuck, or they may have come from the Western Auto but by god, those women went out and spent every penny they did not have on an instrument for their kid and to a man, every one of those guitarists remember those guitars with almost obscene pleasure and are beyond grateful to their mamas.

And oh yeah- almost all of these begged-for purchases were inspired by Elvis Presley's first appearance on Ed Sullivan. Or the Beatles.

And that's your fact for the day from me.