Donald Trump Is Fucking Up My Life 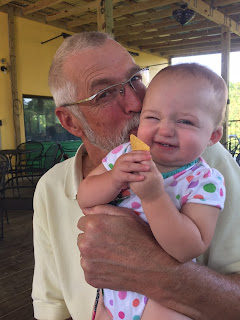 It's my anniversary today, thirty-two years married to that man.
Over half my life, at this point. The best half, without a doubt.
We met for lunch at El Patron with Jessie and August and Hank and Lily and Maggie and Gibson.
"Happy anniversary!" said Lily. "If you hadn't gotten married, there wouldn't be all of this."
And she gestured to take in the babies, the sweetness of it all.
"I want the cheese sticks!" said Gibson. To the hostess as she sat us at the table with our menus. Because really, that's what matters and the sooner he can order them, the better. 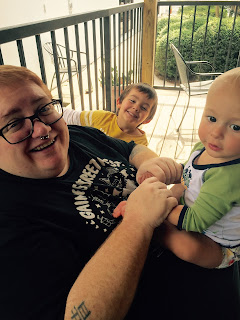 Trump is speaking in Tallahassee tonight and his minions have been lined up all day, waiting to bask in the reflected Cheeto-lit glory of his face. I hear the traffic is fierce and poor Lily has to be at work and her Publix is literally right across the road from the venue- an antique car museum owned by Tallahassee's most ardent supporter of anything that doesn't restrict his ability to make money. People keep saying that they hope he got his money from Trump up front but I'm thinking that he's the one who paid to have him here. That's the only thing that makes sense to me but fuck if any of this shit makes any sense.
I just read that the traffic on I-10 is backed up for miles and see? This is what is still scaring the living shit out of me. I don't care what the polls say- if he has a chance in hell then I'm scared.
My next door neighbors have put a Trump-Pence sign out front of their house. I knew this was coming. And the damn thing is- I like these people as neighbors. You could not ask for better.

It's all so fucking fucked up.

I'm going to cook some pork chops. What the hell else is there to do?
Apologize to the world, take care of your babies, sweep the floors, love and kiss the ones you love as much as you possibly can.

Be grateful that you married a man who voted early so that he could be sure that his vote for Hillary counts.
I swear to god- even after thirty-two years, as much as I love him, as darling as he is, if he voted for Trump, I might have to leave him and that would make me sadder than I can say.

And Lily reports that she still hasn't been able to get to work due to traffic and sheriffs and blocked roads.

I'm just going to stay drunk for the next two weeks.