Yes, Danielle, You CAN See Through This Guy's Wings 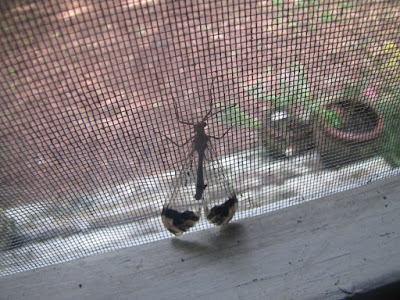 Guess what? It's hot. Haha! And guess what else?
It's humid!

But that's okay. I'm sitting here drinking my smoothie and I've been to the dump depot and to the post office where I saw Hippie L, a woman I've known since dinosaurs walked the earth and I had perky titties. That's a long time. She reminded me today that I have the best man on earth.
She's always yearned for my man. I know she has. She's not the only one. I think that somewhere there is a sign-up list for women who want my man should I, oh, disappear. And Hippie L is on it. Believe me.
I saw her the night Mr. Moon and I got engaged and she told me that although she rarely told anyone that they should, indeed, get married, she was telling me that in this case, with this man, her advice was to DO IT!
That was almost twenty-six years ago. And she's still telling me what a fine man I have.
Well. She's right.

I was telling Kathleen and Sweetie yesterday, though, that when Mr. Moon retires, there are going to have to be some ground rules. The main one is that when I get up in the morning, there must be at least fifteen minutes, MINIMUM! before he is allowed to speak to me beyond, "Good morning, I love you."
And that will be pushing it.
Every morning of my life I get up and wonder if really, I can do it again. Live through another day. That's just the way it is. That's just the way I am. And I work through that, every day. But it requires some time and some silence.
It does not involve having someone tell me about articles in the newspaper.
And please don't suggest that I get up earlier than Mr. Moon. I have to wait until the moment is ripe for arising. When I gather my forces, gird my loins, and make the heroic effort to rise from my dreams.
And usually a hot flash because I have to throw the covers off me anyway.
Unless of course Owen is coming early or I need to accompany someone to town for an appointment or I am going to get on a plane to Mexico. (Best case scenario, that one.)
In those cases I get up at a specific time and it's not bad. But still, there must be a period of silence for me to work through my morning-blues and I set the clock accordingly to allow for that.

We all have our quirks and our rituals. We all have our needs and sometimes we just have to make them clear. If I were Mr. Moon and I saw ME in the morning, I would not say a thing for fear that if I opened my mouth the words out of them would be, "MY GOD! YOU'VE AGED FIFTY YEARS SINCE LAST NIGHT!"
Or something to that effect.

Well, good morning. I have things to do. And the phone man has exactly one hour and thirty-eight minutes to make good on the promise the girl made me yesterday when I reported my phone was out. She said that it would be fixed by 11:30 a.m. today.
Hmmmm....
Where are you, Mr. Phone Man?

And have you watched any of the Drunk History videos on youtube? If you haven't, you should check them out. They're flat-out hysterical. Just go to youtube and search for Drunk Videos. SOMEONE IS HAVING FUN IN THIS WORLD!
I hope you're one of them.

Sign-up sheet to the left of the door as you exit. There's a clipboard with a pencil tied to it. Add your name. Should any vacancies arise you will want to be on the list. I have trained the man well and he is a marvelous catch. We're working on the morning silence thing. I would advise, though, if you wish to be in serious consideration for the position that you know how to make biscuits.
But don't hold your breath. I'm not thinking about going anywhere.