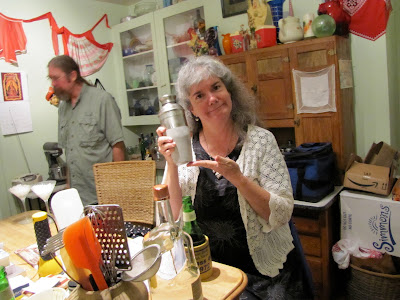 Oh, darlin's, what a weekend it's been. And it's only Saturday night.
I am three days and one hour away from turning fifty-six and you know what? I did things today I have never done in my life. I have felt things I've never felt in my life.
And it has been good.
I got home from the Opera House last night (and I did not spill one thing on any person whatsoever at all) around nine-thirty and Lon and Lis got in a few moments later. And at that point, we all decided that it would be a good idea to crank up the martini shaker. See picture above.
And so we did. And it was fine, thus sayeth the Lord.
We had a great time and I was in bed by midnight but woke up around four a.m. and realized that no, it had not been such a great idea, especially maybe the second martini. I didn't get back to sleep until around six and got up around eight only to realize that I had to GET IN THE CAR AND DRIVE LON TO A MIXING GIG HE HAD TO DO IN TALLAHASSEE, which I did, and then Lis and I got a bagel and some coffee and headed over to FC Rabbath's house for some rehearsal. Mr. Rabbath is having printer problems and there were only three scripts for about seven of us, and none of us knew what we were doing but it was so much fun, rehearsing for a movie that none of us had any idea whatsoever was going on in (and I know now that Freddy is reading this blog and so HEY! FREDDIE! IT WAS AWESOME!) and as I said, Natasha came out and took me over and that met with approval.
After a few hours of rehearsal, Lis and I came home and ate some stuffed peppers and I scrambled around in my closet trying to find something for Natasha to wear. It was ridiculous but I did end up wearing the original Natasha high heels and that was good.
Back in the car and down the road to Marcy's house where filming was going on and somehow, it all happened and I did what I was supposed to do. And Freddie was actually filming two short movies at once and he asked me to step in and play another part for the other movie, which I did, and by the time I got home, I was somewhat soaring.
You know what? It's not that I think I'm the world's greatest actress because I know I am not. And I am fifty-five years old (for three more days and thirty-seven minutes) and I don't have one fucking thing to lose. I am not trying to make it as an actress. I am not an actress. Actor. Whatever. And I was surrounded by people with HUGE talent who have lots of experience and training and I know that and I'm not even trying to compete, I'm just having fun.
"Do this, be that, step here, wait two beats, there you go. Action."
God, it was fun.
My Natasha character got killed. I was going to be dead in a scene and the murderers were going to drag me across the yard but it started raining so that scene got canceled.
I was so disappointed. Oh well.

I found out that Freddie (HEY! FREDDIE!) is only twenty-three years old and that his shorts have won awards and that he was a translator in the Marines and I looked at him and I said, "Oh, you are such a baby and look at all you've done!" I hope he didn't take it the wrong way. I am seriously impressed.

And then he was finished with me and I came home and got ready to go to the Mockingbird and Mr. Moon and I drove to town and it was such a lovely night. Billy and Shayla and Waylon were there and Ms. Petit Fleur and her husband their son, Harley, who could not stop dancing. And we ate delicious foods and had another martini and I got to visit with May and the music was wonderful and on the way home, the almost-full moon followed us all the way. When we got back to the house I went out and closed up the chickens and took this picture of our traveling companion: 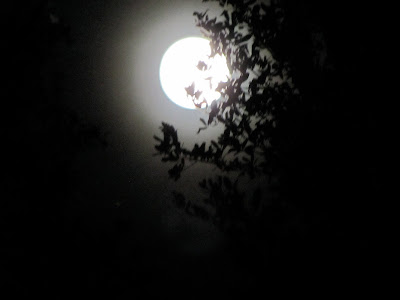 And now I might take my second shower of the day and go to bed. I have a rehearsal tomorrow afternoon and Lon and Lis are staying tomorrow night too and I think the kids are going to come out and maybe we'll eat cake. For Kathleen. Whom I hope will be here too.

And I just feel so good. I did something today which should have been, could have been very stressful but instead just felt as comfortable as lying down on a couch covered with down pillows.

Look. My face and body are falling apart and I ache everywhere and I'm at least ten pounds heavier than I wish I were but you know what? I don't care. Today I felt like my age was working for me.
Tomorrow I may feel differently about it all but tonight, that's how I feel under this almost-full moon.

And I'm so glad I could write about it. Could put it down so that I'll remember. Three days and twenty-one minutes before I turn fifty-six, I am as happy as I can be with where I am which is in a tiny village in North Florida in a house I love where I live with a man I love and people I love are visiting here and I got to hear them make music tonight and tomorrow I'll see more friends and my grandson.
And eat cake. 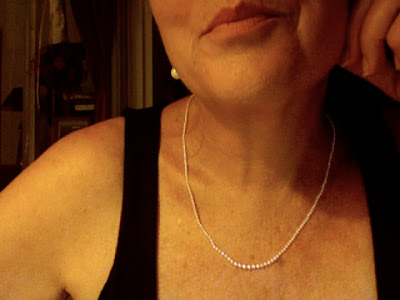 I am wearing my great-grandmother's tiny pearls around my neck, my old, wrinkled neck, and they are laying on my old sun-spotted chest and I am as content as I can be with this life, this time of this life, and all that it is in it and the people I am sharing it with.
And I have to say that Kathleen and her cancer has already taught me some things about enjoying it all and being comfortable in who I am. How strange to say that a dear friend's cancer has made my soul float freer but it has.
I would trade her good health for my not learning this lesson in a heartbeat but I can't do that. And I am not one to find meaning in everything that happens. I am just reporting what I am learning.

Three days and six minutes. I'll be fifty-six years old.
I feel like an old dog learning new tricks.
Roll over. Play dead. Oh wait. It's raining. Get up. Don't play dead. We'll shoot something else.