He Does Desperate So Well 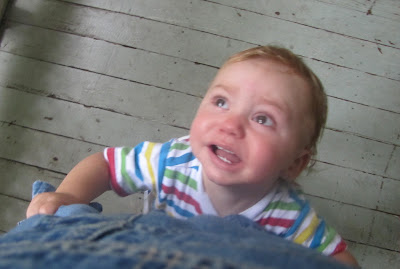 This is Owen when he becomes bored or frustrated or tired or just wants to be picked up.
And since he has come to the conclusion that his place in life is on my hip, this is a sight I see many times a day when the boy is here.
Oh, he's happy to play with things by himself for awhile. Moments at a time!
But then, you know, he wants Grandmother to play with him.
And Grandmother does.
Yes. He's spoiled. So what?
He went with Kathleen and me today to the hospital so that we could meet Kathleen's radiation oncologist. Back-up babysitter Jessie is out of town and Pop-Pop had work and so he just came with us. It was fine. There were crackers in the waiting room. He was mostly good.
There was a moment though when a volunteer came through with a therapy dog. Yes. A therapy dog in the waiting room of the oncology radiation department. Frankly, no one seemed thrilled to see this dog, poor thing. No one. Well, a nurse did.
But the dog zoomed right over to us because Owen had dropped a few Cheerios and guess what the dog's favorite treat is?
Yes. Cheerios.
And then the dog wanted to get in the diaper bag to find the Mother Lode. And Owen was not sure about the dog. Owen likes dogs. The dogs he knows. And this was an unknown large, brown and black dog. A little intimidating and the handler just couldn't seem to understand that Owen didn't really want to interact with the nice doggie. Then the dog jumped up as if to get right in Owen's face and I went into Grandmother Lion mode and put my arm up and twisted Owen away and THAT WAS THAT FOR THERAPY DOG for us!
I'm not sure about that situation. I mean, it's one thing for someone to take a therapy dog around to patients' rooms and knock on doors and ask if they'd like to see and pat a dog. Those people are lonely and bored and in pain. A dog could be comforting and a reminder of the real world. The people in the waiting room of oncology radiation aren't imprisoned there for very long. Not so long that they've begun to yearn for the sight of a dog. Know what I mean?
So that was weird but we survived.

And Kathleen has written about the actual meeting of the doctor whom I am going to call Dr. Beautiful and Kind. I will say that she reminded me of Queen Latifah in her dignity and beauty and down-to-earth intelligence. I will say that I would trust her with my life. I would say that I could go shopping at Goodwill with her. Forget going to have a beer with her- I'd like to go shopping at Goodwill with her. It would be SO much fun.

Since I started writing this, several days have gone by. Or hours. I'm not sure. I couldn't sleep last night until two or so and four hours is not enough sleep for this old broad. But since I started writing it, Owen has woken up, Pop-Pop has come and gone, and so has Lily and Owen is headed home with his mama. I am alone.
But before Lily got here and after Pop-Pop left, Owen and I went out in the yard and just followed the chickens around and the cat came up to us and between saying "Kitty,"(which he pronounces like ehkeh) and crowing like a rooster, he was about to explode with excitement. Really. I was a little bit worried there for a moment.
And when Lily was trying to leave, Elvis had gotten himself wedged under the wheel well with Carol and was lying on her backwards and making those cooing, amorous love-making sounds. Carol finally popped out but Elvis wouldn't budge even when Lily started the car and honked the horn. I finally grabbed him by the legs and pulled him out. He was in that trance. Look- chickens? Crazy.
But I love them.

Sort of like life. There's like 99% of I don't understand but hell, it only adds to the great mystery of it all.
And now I think I'm going to go lie down the new Vanity Fair and read about Angelina Jolie. Which is about as much heaven as I can take at four o'clock on a Monday afternoon after a day like this one which held mysteries and delights, fears and joys, annoyances and belly laughs and lots of baby-riding on my hip.
Posted by Ms. Moon at 1:04 PM