Mr. Moon's sister Brenda is visiting which is a rare treat and so we all went out tonight. Aunt Brenda had never met Owen and since Lily is like Brenda, Jr. in so many ways, I was excited to see the grand meeting between Brenda and Lily's son.

It was fun! We went to a local restaurant called Kitcho's where Mean Aunt Jessie works and everyone was there except May who had to work tonight. We missed her wicked bad.

But here are some pictures: 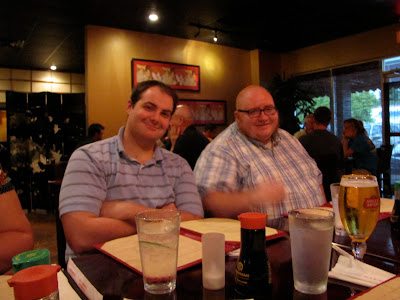 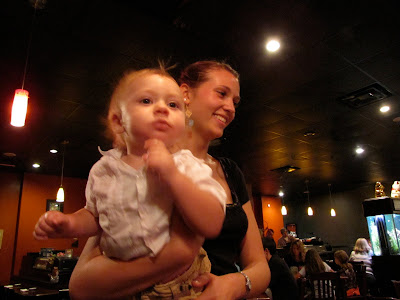 Mean Aunt Jessie and Prince Owen, Ruler of the Universe. 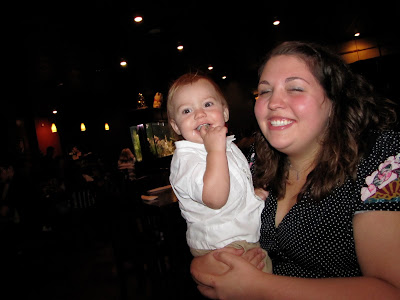 Lily and her son, PO,ROTU. 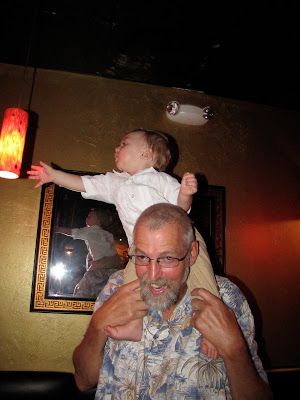 Owen on Pop-Pop's shoulders which makes him the tallest thing in the world. 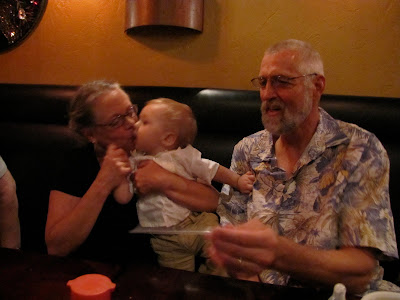 Owen kissing his grandmother with all his heart and soul. 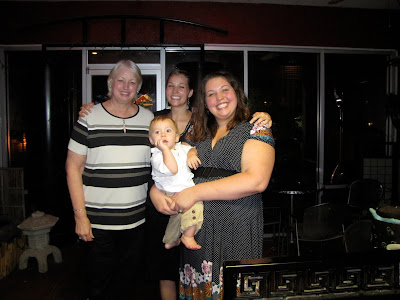 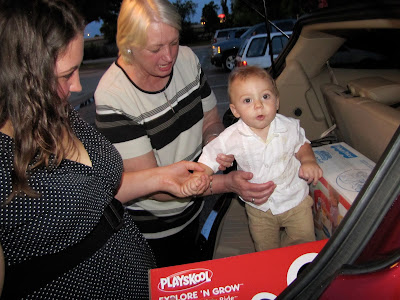 Owen checking out the presents Aunt Brenda brought him. He was duly impressed. Wait until he realizes there are things IN the boxes! 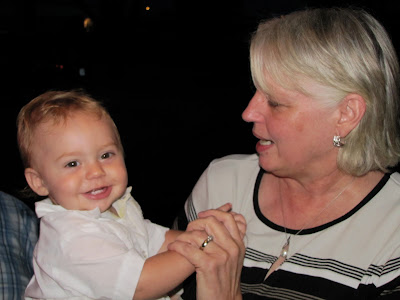 Charmed by his Great Aunt Brenda.

Now let me tell you something about Great Aunt Brenda. Back in the day, back before the WNBA, back when women were not supposed to be athletes, she was a member of the All American Redheads.

They were a pre-professional women's basketball team which toured around the country as an exhibition team, playing against men and beating the hell out of them. Now, I knew this and have always been mighty impressed but tonight, I found out there's a video on YouTube which Brenda's in.
She's the first person to pop up in it so go check it out and see what a woman could do with a basketball back in the day.

She's one of my heros, Brenda is. Not just because she was a woman athlete when that was unheard of, but for many other reasons as well. She's something, that woman. And she's proof to me that yes, I married and mated well.
Good genes in that family. I am glad I did my part to ensure their continuation.
I'm glad Brenda's here. And I'm glad that Owen got to meet her. She gave him his first basketball hoop which was just the cherry on top of the cowgirl of a real, real good night.
And who knows? Maybe he'll grow up to play basketball like his Pop-Pop and his Great Aunt Brenda.
It could happen. If I know one thing it's that darn near anything can happen.

And tonight as I looked around at my family I was reminded of that quite clearly.