Another Sunday Morning At The Church Of The Batshit Crazy

It is Sunday morning here at the Church of the Batshit Crazy and that means one thing and you know what I'm talking about- pancakes.

Before I even had them mixed up, Jessie called from her bed in town to ask if maybe, perhaps, I was making pancakes this morning.
"I'm just about to start," I said.
"Really? Could I come and have some too?"

Nothing make me happier than a child-come-home for pancakes.

When I was a child, we, too, had pancakes on many Sunday mornings. Now, having said this, I wonder why in hell I do that too. Sundays were bad, bad mornings for me then and you'd think that pancakes would only remind me of that. However, the way I do pancakes and the way they were done in my childhood home is so different that it is hardly the same thing at all.
My mother, for some reason, decided that an electric skillet was the thing to cook her pancakes in. It was coated with Teflon, of course, so the spatula had to be that plastic kind which wouldn't dislodge the coating and the pancakes she made were begun with Bisquick and ended there, too. And despite the nonstick pan and despite the generous use of sausage grease to increase the nonstickiness, the pancakes always stuck.

But we ate them, we enjoyed them.

I start my pancakes with about 3/4 of a cup of self-rising flour. To this I add about 1/4 of a cup of ground flax seed and that much oat bran, at least. Then an egg or two, depending on whose eggs I use. If Betty's, I need two. If Carol's, I need one. To this I add about 1/8 of a cup of canola oil, little bit of sugar, about a teaspoon of baking soda and then, oh, I don't know. About a cup of buttermilk? Enough to make a nice liquidy batter. Then the fun begins. I grate an apple into the mix. I throw in a handful of blueberries. I smash a banana with a fork on a plate and scrape that in. I toss in some pecans. I mix it all up and spoon out three nice pancakes into my iron skillet which has been sprayed with Pam.
It looks like this: 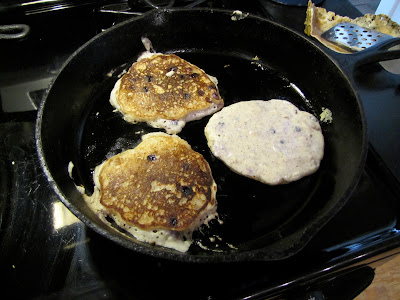 I have some venison sausage cooking in another skillet. It looks like this: 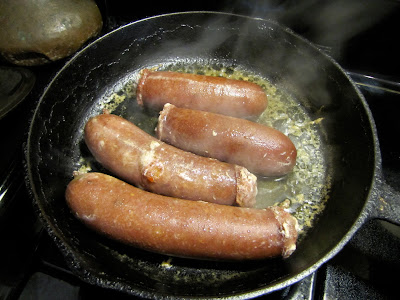 I keep the pancakes which are done on a plate in the oven heated to about 250 degrees. And when it's al done, if it's a beautiful morning, like it is this morning, we eat outside so we can watch the birds 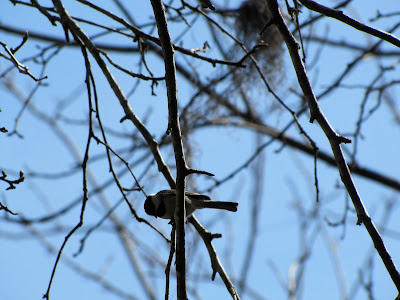 and enjoy the sweet air. The dogs gather around, even hopeful that we'll toss them sausage (we do not) and we eat.

Jessie drove up right as we were about to pour the honey and syrup. She was wearing the overalls I gave her. The dogs were joyful to see her. So were her daddy and I.
She got a plate and joined us. It looked like this: 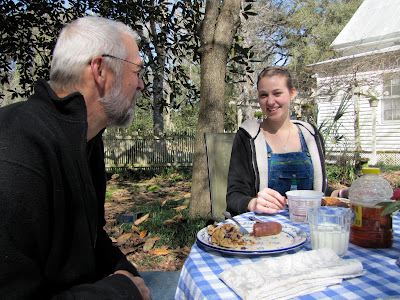 And she had brought camellias from her Aint Liz's house. They look like this: 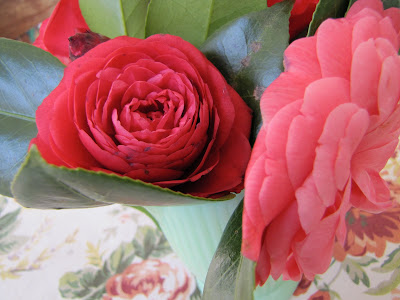 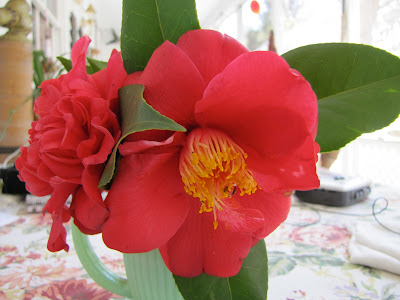 No. Pancakes at the Moon house on Sunday morning are nothing like pancakes in the house I grew up in. At all.
Which is why it doesn't make me sad to make and eat them. No. It makes me happy.

Sunday morning at the Church of the Batshit Crazy and this is how we take our communion, how we glory in the day.

Grab a plate and pass the honey.